Education is the key to capitalizing on the green movement. 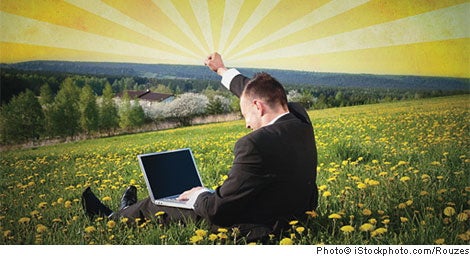 Kermit the Frog once bemoaned that it ain't easy being green. And while the number of green products and companies out there has proliferated in the years since Kermit's lament, the sentiment still stands--even if the Muppet meant it a little differently. You can't just stroll into Home Depot and pick up recycled paper countertops, formaldehyde-free and sustainably harvested cabinets, antimicrobial faucets, and a few solar panels to go. Instead, you spend your time researching, surfing the Web, attending seminars, reading books and magazines just to get educated and figure out where the heck you're going to buy all this stuff.

Australian born Danny Kennedy and his co-founders (a Scottish investment banker and an American entrepreneur) at Berkeley, California-based Sungevity recognized this pitfall and decided to do something about it--starting with solar. If Kennedy has his way, 20 years from now every rooftop in America will be producing its own electricity and saving people money. With goals that high, this unlikely trio has its dance card more than full, but Sungevity has started paving the way by making solar more accessible in California.

When it comes down to finding a solar company and getting a bid, Kennedy calls the current process "inefficient" and "clunky"--a solar company rep schedules an appointment, gets on your roof to survey the project, and several days later you get a quote and realize you can't afford it. With Sungevity, you enter your address, roof type and utility provider on its website, and within 24 hours you receive the same quality quote as the one from the guy who walked around your roof all afternoon. This streamlined process is achieved by using aerial photography much like you see on Google Earth.

By no means is Sungevity the first solar provider to offer quotes using aerial photography, but this technique is still new in the industry, and those that embrace it are reaping the benefits. Kennedy says they've cut estimate costs by at least 10 percent,--and "10 percent," he says, "gives us an edge." In its first year of business in 2008, the company had $2.7 million in revenue and was the eighth-largest solar provider in California.

Along with providing and installing the solar panels, the company can take care of any paperwork needed to collect rebates and incentives offered by local or state governments, another once-monumental task virtually eliminated for the customer. This is exactly what Sungevity hopes to continue doing. Kennedy's long-term goal: Be a home-energy management company that can consult on installing and operating all green systems for homes from California to middle America.