Can business and politics go hand-in-hand? Find out about the risks--and rewards--of publicly endorsing a political candidate.

February 4, 2008
Opinions expressed by Entrepreneur contributors are their own.

Linda Reichert says she'll never forget the moment when Sen. Hillary Clinton (D-NY) walked through the front door of her Muscatine, Iowa, bed-and-breakfast. "My husband says the look on my face was priceless," says Reichert. The co-founder of Strawberry Farm Bed & Breakfast invited Clinton to her home after meeting her in Davenport, Iowa in January 2007. "We in Iowa have been so fortunate to get to meet and talk to our candidates," says Reichert, also a member of the Women's Leadership Council for Team Hillary.

For Linda and her husband, Karl, supporting presidential hopeful Hillary Clinton has done wonders for business. "Guests ask, 'Which chair did she sit in?' says Reichert, referring to the dining room where Clinton sat with Muscatine locals to discuss her stance on the war in Iraq.

Endorsing a political candidate isn't always easy for a business. David E. Johnson, CEO and founder of Strategic Vision, LLC, has witnessed that firsthand. His Atlanta-based public affairs and public relations agency specializes in analyzing elections and providing insight on voting trends and demographics. Over the years, Johnson has seen clients endorse losing candidates. When that happens, he meets with the client to re-establish their strategy and recommends making a donation to the winning candidate after the election. "It looks like you're trying to make amends," he says.

Before supporting a candidate, Johnson advises, "Know who the players are, know what the consequences are and make sure that you know what you're getting involved in. These races and candidates can really affect you and help you." Johnson points out that many startups support certain candidates to establish their role as a "major player." 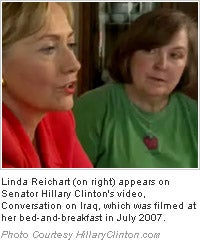 Johnson and his 15-person team at Strategic Vision practice what they preach. "I base [our endorsements] on the decision of what is in the best interest of the company, as far as where we're located geographically and how the candidate can help us in the various markets we're involved in," says Johnson.

Johnson says that while it's important to find a candidate who shares a similar vision or stance on issues, it's equally important to find a candidate who can help your business long term. AgileCat founder, Peter Madden, admits he was a stranger to the political landscape until he met the right candidate. Madden's Philadelphia-based public relations and branding agency recently endorsed the campaign of mayoral hopeful Michael Nutter. Madden met Nutter about six years ago, when Nutter was a member of the city council representing the 4th district, where Madden lived. Madden called him to relay a grievance with construction on the street outside his home. He was amazed to receive a message from Nutter, along with his cell phone number. "I never forgot that. It was on my mind when I first heard he was going to make a run for mayor of Philadelphia," says Madden. 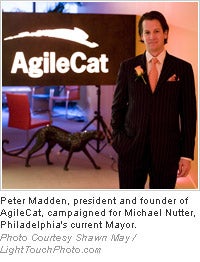 Encouraged by Nutter's down-to-earth nature, Madden used his wide network of contacts to spread the word about the candidate. He started by hosting a meet-and-greet for the city councilman, then followed up with several other events. Madden was present when Nutter was elected as Philadelphia's mayor in early January. "I knew this could be a great thing for the city, and a great thing for our business," Madden says.

Madden isn't sure if his company will endorse any candidates in the presidential campaign. He felt comfortable supporting Nutter because he was accessible and affects the city his employees live in, where they all pay taxes.

Johnson says it's important to think about your employees, vendors and clients before endorsing any candidates. "Don't just do it to do it, because there can be consequences from employee dissatisfaction and lost clients," he says.

Two Los Angeles-based entrepreneurs took a risk by endorsing a candidate many people in their industry didn't support. Wendy Moodie and Teresa Merkle, co-owners of Paradigm Shift Worldwide in Northridge, California, were endorsing former New York City Mayor Rudy Giuliani prior to his withdrawal on January 30. Moodie and Merkle, members of California Business Leaders for Rudy, specialize in event marketing and production. Many of the events they produce involve the movie industry, including premiere parties and DVD releases.

"Overall, we're a women-owned business in entertainment. So supporting a Republican is not necessarily a good thing for our business," says Moodie. "But, I think once people realized that [Giuliani] is a social liberal, and looked at his beliefs, they understood why we were backing that candidate."

Johnson encourages companies thinking about endorsing a candidate to seek help before making any political endorsements. "It's very important to have someone giving strategy and advice, because most people aren't versed in the ins and outs of politics and don't have the inside contacts needed," he says. "You want someone who can give you an objective opinion, who can advise you and navigate you through the course."

For Reichert, whose son, Nathan, is in the Iowa House of Representatives, taking the risk has been worth it. "It has been a fascinating year seeing all the avenues that have opened up for us."