The Power of Celebrity 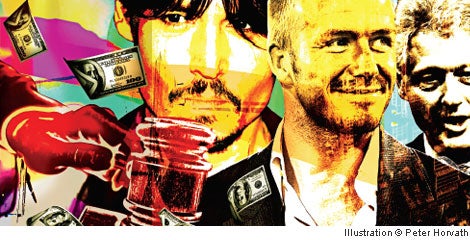 When a lively woman in her 80s wished to meet X-Men star Hugh Jackman while she was still in good health, she began bidding through Charitybuzz, which was auctioning off a day with the actor. Her efforts paid off, and the woman had both lunch and dinner with her favorite star, who was quickly won over by her energetic spirit. But the benefits went beyond this woman's experience--the proceeds went all the way to Bette Midler's New York Restoration Project.

A-listers like Jackman and Midler aren't often associated with small business. But Coppy Holzman, a former internet entrepreneur, found a way to link entertainment with entrepreneurship. Charitybuzz, which he began as a side project, has since drummed up support for hundreds of nonprofit organizations involved in the arts, education, the environment, science and more. The Robert F. Kennedy Memorial, Rosie's For All Kids Foundation and Gabrielle's Angel Foundation for Cancer Research are just some of the charities involved with Charitybuzz, which Holzman launched in 2005 after noticing the popularity of celebrity experiences and merchandise in auctions.

The Westport, Connecticut-based business specializes in online and live charity auctions for one-of-a-kind experiences with some of the biggest names in pop culture. With the exception of the fee Charitybuzz deducts from the auction winnings, all proceeds go to charity. Over the years, socially conscious bidders have won vocal lessons with Aretha Franklin, training sessions with athletes like Andre Agassi and David Beckham, and visits with stars like Johnny Depp. The company has even offered experiences with politicians, including VIP tickets to President Obama's inauguration and a meet-and-greet with former President Clinton.

These stars "really do want to give back, and they understand the power of their celebrity and how they can use that power to generate a lot of support from their peer groups in terms of donating experiences," says Holzman, 54. Aside from celebrity packages, Charitybuzz auctions upscale merchandise as well as extravagant prizes like cars and cruise vacations--which have sold for as much as $250,000. Other auctions have included education internships, gourmet dinners with top chefs and vineyard vacations.

Particularly in this economy, Holzman says people feel more inclined to give back, which has only helped Charitybuzz prosper: The company doubled its business in 2008, and the number of registered bidders on the site continues to grow. Being able to contribute in different ways to organizations both large and small has been the most fulfilling part of the business, says Holzman. "When we raise $25,000 to $50,000 for charities like Figure Skating in Harlem or New York Coalition for Healthy School--and that's their annual budget--that makes me feel good."