Costume megastores can whip up scary-good profits in two months.

By Jason Daley
September 17, 2009
This story appears in the October 2009 issue of Entrepreneur. Subscribe » 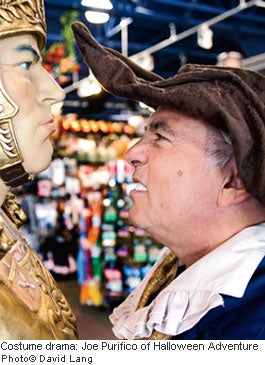 We've all seen those costume megastores take over vacant buildings in September only to vanish like witches into the night a few days after Halloween. Where do they come from? Are they enchanted (or profitable)? And why are they always so freakin' big? We caught up with Joe Purifico, CEO and co-owner of Halloween Adventure, a Philadelphia-based chain of 150 seasonal costume superstores and 15 permanent shops. Now that Purifico is getting ready to spin off 50 franchises, he seemed the perfect person to explain the mysterious Halloween superstore phenomenon.

Is it really worth it to be open only two months a year? Can't people just get a Batman mask at Wal-Mart?
Halloween has really changed. It's not just a children's holiday--adults have parties, nightclubs have costume contests offering things like trips to Bermuda. And the manufacturers have changed too--gone are the days of the disposable plastic costume. We sell Broadway- and theatrical-quality costumes. Adults usually spend three or four times what they spend on their kids! Our goal is for each store to bring in $250,000 in revenue, though we've had some bring in upwards of $600,000 in those two months.