Suzlon Group is one of the leading renewable energy solutions providers in the world with an international presence across 18 countries in Asia, Australia, Europe, Africa and Americas

Suzlon Group is one of the leading renewable energy solutions providers in the world with an international presence across 18 countries in Asia, Australia, Europe, Africa and Americas.

She believes in the strength of robust family businesses.

In a chat, Tanti spoke about how the second generation of big family businesses benefit from the platform established by the business' first generation. She thinks it's amazing when you have the base and platform – it enables you to grow and develop further

They created all the basic necessities that a business would require and hence now the growth of the business really comes in from the part that you can go for further strengthening the platform. So, through our business we are adding on newer business verticals, expanding business across the solar industry, battery storage energy, wind solar and hybrid.

Suzlon has a fantastic team at home that really looks into the knowledge pool on both the tech and commercial pool reveals Tanti. She thinks it is important to utilize what the first generation has invested in – like their precious time and energy into the business and that has really helped her and encouraged her to develop and embrace the business further.

The privately-held company, which was started in 1995, has staff strength of more than 7,600 workers, Suzlon is among the oldest Indian conglomerates to manufacture and develop solar energy solutions in the country. 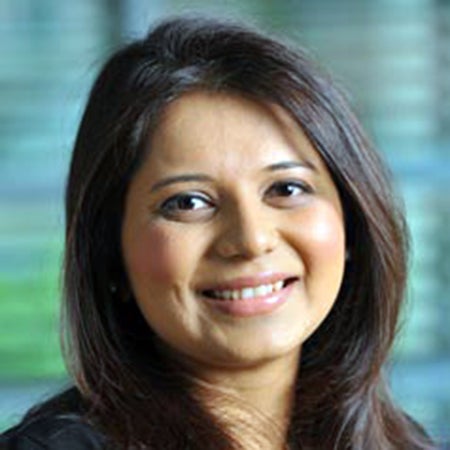 Tanti believes that all women should be passionate and focused about that passion.

"In the past five years, a lot of drops out from women specifically into their careers to get a certain stature whether it's their marriage or getting pregnant and having kids has happened. The commitment drops off both on the part of families, ecosystem and business enable women to stay on at work and pursue that dream or career whatever they are aspiring for," Tanti said.

She believes it's very important for females not to give up on their careers. Her tip is for women to be focused on what they want. She also advises them to be well-supported by their families and the ecosystem.

"A lot of responsibilities other than work hold females back to fulfill their dreams and passion but most importantly females have to be career-oriented and passionate about what they are seeking," Tanti said.

Is Entrepreneurship Challenging for Women?

Tanti believes the success of a woman as an entrepreneur completely depends on the career choice she makes.

"In certain specific career choices, there has been a lot of leading women out there who made those inroads. It became easier to get into those sectors, specifically when I talk about fashion, media and other sectors. In some sectors, it's still very difficult because those inroads have not been made, so I think for those courses I would believe that more encouragement should be there to more and more women to come on board and try career path which is not coined traditionally for women," Tanti said,

She explained that a lot of women have gained fame and honor in the various sectors and also highlighted that many sectors are not yet explored by the women entrepreneur. For that, the women should be encouraged to take up the challenge and be focused. Also the path should be created so that females can touch such sectors that are not yet explored by the female entrepreneur.

3 Ways Your Brain Reacts to Uncertainty

Here's Ben Angel's three-step plan to control your emotions and achieve your goals.

How a Throwaway Joke Became an Award-Winning Ad Campaign

In our 'Creative Conversations in Advertising' series, Creative Director at Goodby Silverstein & Partners Tristan Graham and Entrepreneur magazine Editor in Chief Jason Feifer discuss the birth of a very funny (and impactful) commercial.

In our series 'Anatomy of an Ad,' Group Creative Director Tony Jones gives the heartwarming story of how Operation Santa finally took off.

How this Tech Entrepreneur, Biohacker, and Author is Helping Women with Their Periods

The founder and CEO of Flo Living on the future of biohacking and hormonal healthcare.

'Like the Kickstarter of Crypto': This Company Launched a Crowdfunding Platform for Blockchain Projects

Lucas Mateu, the co-founder and CEO of Vent Finance, sits down with Entrepreneur.

The Key to Effectively Communicating Important Messages Is All About Simplicity

How to Deliver a Serious Message Through Humor

In our series 'Anatomy of an Ad,' Creative Director David Stevanov explains how humor can be a storyteller's most effective tool.

The Founder of Ooonimals, Club 44, and the OOO Studio Lab talks about his current projects and what you need to know about the risks and rewards that exist in the NFT space.

Interview with Popmenu CEO Brendan Sweeney about building a positive user experience, the state of restaurant technology, and the importance of providing answers.

Recession-Proof Your Mindset with Neuroscience

With top economists fearing a recession, award-winning author Ben Angel teaches how to recession-proof your mindset with neuroscience to manage stress levels.

How to Find Your "Oxygen Points" to Sustain and Grow Your Business, According to an Investment CEO

How to Get Investment Funding for Your Business

Entrepreneur magazine's Editor-in-Chief Jason Feifer and Narya Partner Falon Donohue have a lively and informative conversation about securing the funding you need to launch your dream.

The Chief Product Officer of MonkeyLeague discusses his company, why monkeys are all the rage for NFTs and gaming, and his advice for developers.