This story appears in the November 2006 issue of Entrepreneur. Subscribe »

I grew up with two dads, and two very different perspectives on money and investing. My poor dad, my real father, was a well-educated, hard-working man who served as the superintendent of education for the state of Hawaii. He was a well-paid employee who ultimately died broke. My rich dad, the father of my best friend Mike, quit school in grade school but used his street smarts and entrepreneurial spirit to become one of the wealthiest men in Hawaii.

My rich dad taught me about "thinking big," even though he did not talk about it. Instead, the words he often used were leverage and expansion. When he taught his son and me to think about the differences between leverage and expansion, he used the McDonald's franchise as an example. He would say, "When Ray Kroc bought McDonald's from the McDonald brothers, he leveraged himself. When he franchised McDonald's, he expanded his leverage."

This idea brings me to the concept of the Cashflow Quadrant (see the image above). The letters in each of the quadrants represent:

Each of us resides in at least one of the four sections of the Cashflow Quadrant. Where we are is determined by where our cash comes from--paychecks or passive income.

Though financial freedom can be found in all the quadrants, the skills of a business owner and investor will help you reach your financial goals more quickly.

You may notice I used the words franchise system, the key word being system. In my book Before You Quit Your Job, written for entrepreneurs, I write extensively about the B-I Triangle. The B-I Triangle is the diagram my rich dad used to focus my thinking and to teach me about the eight parts that make up a business.

Many entrepreneurs fail simply because one or more of the eight pieces of the B-I Triangle is weak or nonexistent. Whenever I look at a struggling business, I use the B-I Triangle as an analytical reference.

Notice that the word product is used to label the smallest section, and the word mission is one of the largest sections--as well as the foundation for the Triangle. This is because the product is the least important item in the B-I Triangle, and the mission is the most important. The mission is the spirit of the business; it is the heart of the business. Without spirit and heart, most entrepreneurs will not make it, simply because the road ahead is a hard one. 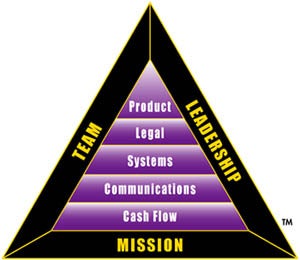 The world is filled with great products that fail. The products fail simply because they do not have the power of the B-I Triangle behind them.

When you study most successful businesses, you will most likely find a complete and vibrant B-I Triangle in action. A great business will have a strong mission, great leadership, a competent team of managers who work well together, excellent cash flow and financing, clear and effective sales and marketing communications, systems that work efficiently, clear and tight legal documents and agreements, and of course, a great product.

Far too many businesses are people-dependent. McDonald's, on the other hand, is system-dependent. It has well-designed systems. Regardless of where you go in the world, the McDonald's business is pretty uniform. Most important, the company's business systems are often run primarily by people with just a high school education. That is how good and how sound the company's systems are.

What is the difference between an entrepreneur and a CEO? Making it as simple as possible, an entrepreneur is like a person who builds great race cars. A CEO is like the driver of the race car. If you have a great race-car driver but a poorly built race car, the great CEO will lose every race. Rarely will you find entrepreneurs who are great CEOs. Donald Trump is one of those people. So are Bill Gates, Michael Dell and Steve Jobs. These men can build great race cars and drive them.

In The Rich Dad Company--a Scottsdale, Arizona, education business that teaches personal finance and business to people worldwide through books, seminars and educational products--we have three people who are both CEOs and race-car builders: Kim Kiyosaki, my wife and co-founder of the business; Sharon Lechter; and myself. Sharon, also a co-founder, is excellent at both building and driving the race car. Kim and I are better at driving, but we do build parts of the car. I often say that I am the horn of The Rich Dad Company, and Sharon is the engine. I would definitely say Rich Dad is a team enterprise.

Donald Trump says "think big," and he builds giant buildings and megahit television shows. My rich dad said to expand, and he meant expanding the way McDonald's did. Both are forms of thinking big.

Robert's explanation of "Think Big, Think Expansion" is great and totally on point. But let's take it one step further. Let's not just think big, let's think expansively. To entrepreneurs, thinking expansively includes seeing what is possible and making it happen. Entrepreneurs see the vision and call it good sense and inevitable. The rest of the world calls it innovation.

Recently, I read with interest about an innovation that was attributed to me. I was surprised because I had never thought of it as an innovation; I considered it just a way to combine two elements that might work well together. Years ago, when I was doing the first Trump International Hotel & Tower at 1 Central Park West in New York City, I decided it might be a good idea to build a condominium and a hotel together. It turned out to be an amazing success and has been duplicated by me and many others since.

So many times, innovation really results from common sense put together with uncommon thinking. It's creative, but it's about innovative assembly more than anything else.

Thinking expansively is just another way to innovate. Sometimes I ask myself, "What else can I include in my thought process to make it more comprehensive? Is there anything I can add that might enhance the project or idea I've got spinning around in my head?" Many times, I will tell myself that something isn't quite right yet, because that automatically opens the door for more ideas to enter. I ask myself, "What am I not seeing? What else is possible?" Sometimes the answers wind up being innovative ideas. It's not necessarily some secret process, but it is a process, and it requires concentration.

Robert, Kim and Sharon recently visited me at my golf course in California. I shared this story with them: My club has a beautiful ballroom overlooking the Pacific Ocean and the number-one golf course in California, but the room held less than 300 people. We were unable to accommodate many events (such as weddings) because our capacity was too small, so my management team's answer was to enlarge the building. They came to me with plans to remodel and expand the ballroom, which would cost millions of dollars and lots of time. We would have had to go through the permitting process and close for many months during construction, thus losing millions of dollars in business revenue--on top of spending millions of dollars to remodel!

As we were standing together looking around the ballroom, I noticed a woman having trouble getting out of her chair. The chair was very large, and she had difficulty moving it away from the table so she could stand up. In fact, the room was filled with these huge chairs. I had an immediate vision: We needed new chairs--smaller chairs!

This one idea not only saved me millions of dollars, it even made me money. We earned more money selling the old chairs than it cost us to buy the new gold Chiavari chairs. We are now able to comfortably seat more than 440 people in the ballroom and have increased the number of large events we host as well as the revenue we receive. No expansion of the building was necessary, and we had no downtime. So, I turned a project that could have cost me millions into a profit!

That's the first step to visionary status--seeing something and knowing it could be different or better.

As I've said before, learn your lessons from as many sources as you can. Think and learn expansively. It won't be expensive, but it can give you some big returns.

For an exclusive interview with these influential business leaders, turn to "Dream Team."