You Can Start a Restaurant in a Down Economy

By Sara Wilson March 17, 2009
This story appears in the April 2009 issue of Entrepreneur. Subscribe » 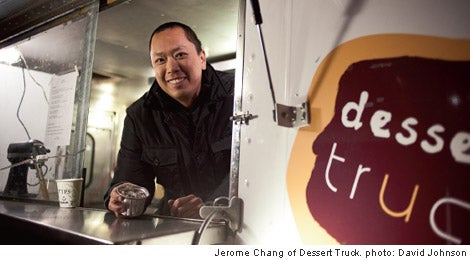 For a complete listing of the top 120 restaurant franchises and how to contact them click here.
So you're thinking about opening a restaurant. The allure of fame and fortune seduces you, your love of food drives you, and you want to heat up your life in an exciting industry. That's all fine and well--just as long as you make sure the flame isn't turned up too high. Even in a healthy economy, the restaurant failure rate tells a grim tale, but in a recession, the industry is even more unforgiving. Expensive food spoils, labor costs are high, restaurant-goers are harder to come by, restaurants close and life goes on.

But we also know we're talking to a special breed of people: entrepreneurs. Entrepreneurs have the drive to go against the grain and the nerve to try their luck in such a ruthless industry. We're not saying don't do it. We're just saying to equip yourself with the right tools or you might just find yourself at the bottom of the food chain. To help you get started, we reached out to a handful of industry experts and food entrepreneurs and compiled the perfect recipe for starting a restaurant or food business in a down economy.

Start with a Dose of Reality
Though you may be anxious to start stirring up business, you can't afford to skip this one step: building a solid foundation. "The biggest thing to avoid is 'Polaroid Syndrome'--here's me in my restaurant, here's me with my chef,'" warns Clark Wolf, founder and president of Clark Wolf Co., a food, restaurant and hospitality consulting firm. "That's not what this is. This is something very different and a lot more work."

Starting a restaurant requires in-depth knowledge about much more than just food. It's also about marketing, financing and people skills. Even if you're not single-handedly equipped with all that know-how, it's not necessarily a deal-breaker. "Take [on] a working partner, someone who's as equally involved in the business as you but brings something different to the table," advises Marilyn Schlossbach, a restaurateur and consultant who has been involved in the industry for more than 20 years.

Possessing the right knowledge is only part of the equation; having sufficient capital comprises the rest. "Historically, people have heard that undercapitalization is the No. 1 cause for failure in business," Wolf says. "It has never been truer. You really need to know not just how much money you need to open the restaurant, but also where the rest of it is coming from." Have enough capital to endure the first six months, Wolf advises, as well as an additional source of capital to get your business through several months after that.

Add a Good Concept and a Handful of the Right Ingredients
While the restaurant industry in general has taken a hit, one segment in particular seems to be faring better than the others. The fast-casual category is capturing customer dollars by offering healthier options at more affordable price points that spell value for consumers. In 2007, fast-casual chains enjoyed a 13.3 percent spike in sales growth and a 9.5 percent jump in unit growth, making it the growth vehicle for the limited-service restaurant industry, according to food-service consulting firm Technomic.

Check out these picks from the National Restaurant Association's "Chef Survey: What's Hot in 2009."

Both Schlossbach and Wolf agree that fast-casual has potential, but Wolf also believes success isn't so clearly labeled. Regardless of the segment, restaurateurs need to focus on making their customers feel better--the No. 1 reason people go to restaurants, says Wolf. Whether through good food or good service, ensure that customers will feel comfortable and safe. And take note of what customers crave. Wolf points out that people craved comfort foods, such as mashed potatoes, after the economic crash in '87 and sushi after 9/11. And now? "The icons of this economic period are 1) a really good hamburger from really good meat and bacon because it's an American birthright, and 2) we are entering the macaroni-and-cheese economy, but the cheese is much better," he says. "Both [dishes] are going to be served with farmer's market greens." Wolf recommends using in-season, local, heirloom and organic ingredients.

J. Dean Loring, 51, and Michael Gilligan, 52, seem to be right on the money. In 2007, they founded Burger Lounge, a fast-casual hamburger restaurant in La Jolla, California. They use only organic, grass-fed beef served on a proprietary bun, focus on presentation and deliver it all with an elevated level of service designed to exceed their guests' expectations. And while other restaurants are contracting or downright going out of business, Burger Lounge is expanding. It's opening a fourth location, averages sales of $1,100 per square foot and projects year-end sales of more than $5 million. "A lot of people are sitting on the sidelines and are nervous about what's going to happen," Loring says, "but we see a lot of opportunities both in real estate and in presenting a product that dovetails with people's needs now. I wouldn't say our company or product or model are recession proof, but they thrive in that market."

Pour in a Whole Lot of Love and Commitment but Cut Out Unnecessary Spending
In an economy where banks are tight on their lending and credit card companies are slashing credit lines, getting the cash you need to run your business may simply be out of your control. If that's the case, think outside the box--and more along the lines of a truck.

Street food isn't what it used to be. Fancy concoctions, fresh ingredients and unique offerings have raised street vendors to a whole new level. In fact, they've become such a part of the restaurant scene in New York City that they've merited their own awards, the Vendy Awards, which for the last four years have recognized the city's best street vendors. They're the new generation of kiosks and a temptingly low-cost way of entering the restaurant scene.

Jerome Chang and Chris Chen, 32 and 25, respectively, opened their mobile food concept, DessertTruck, in 2007 with about $100,000 in startup capital. (Chen has since left the company.) From the side window of their custom-made truck, customers can order delectable $5 desserts such as slow-baked apples and cinnamon, molten chocolate cake, and vanilla créme brûlée right on the street; year-end sales are projected to reach about $500,000. Chang and Chen may have gotten their business under way with a minimal investment, but don't be too reckless in cutting costs. Chang admits they selected the cheapest vendor to build the truck and now, more than a year later, they're still paying for their poor decision. "Dealing with mechanical issues is something any mobile food business faces, and it's something that will consume you if you're not prepared," says Chang, who paid $65,000 for the truck. "In our case, we went with a lower-priced vendor, and it has resulted in many more issues, most of them preventable."

In addition to maintenance problems, the design of the truck is far from user-friendly: The back door, through which Chang and his eight employees load, doesn't stay open. He's also had to fight to secure one of a limited number of street vending permits that New York City grants. Nevertheless, starting a mobile food concept allowed Chang to establish a reputation and create a healthy buzz. Indeed, surviving the hard times will enable you to get through almost anything. "The restaurant business is a business of pennies, nickels and dimes," Wolf says. "If you open now and learn how to do it successfully, you're well prepared for all times."