50 cities and 10 lifestyles energizing businesses of all shapes and sizes.
Next Article

Whatever your entrepreneurial aspirations, there's a city to match your needs, accelerate your company's growth and improve your quality of life. Which is the one for you? Entrepreneur identifies 50 cities and 10 lifestyles energizing businesses of all shapes and sizes.

Even in harsh economic times, America is still the land of opportunity, especially for entrepreneurs with the vision, ambition and flexibility to follow that opportunity wherever it may lead. In an increasingly connected world, no longer are businesses or their owners tethered to one spot on the map: Whether you're sizing up a regional opportunity, looking for a change of scenery or simply desiring a certain lifestyle, there's a location and culture that's perfect for you.

The challenge is identifying which spot is the best fit. Entrepreneur selected 10 contemporary American lifestyles and 50 related cities to complement all kinds of business types. Whether you're looking for tropical breezes, crisp mountain air, crowded city streets or wide, open spaces, they're all here.

Our methodology is as far-ranging as the list itself, incorporating statistical data, lifestyle studies and empirical research. Some choices may seem to be no-brainers, others may surprise you, and still others may have you reconsidering segments of the U.S. in a whole new light. That's the essence of American business: The only constant is change.

1. The Great Outdoors
Five cities where peaks and valleys are more than just points on a graph 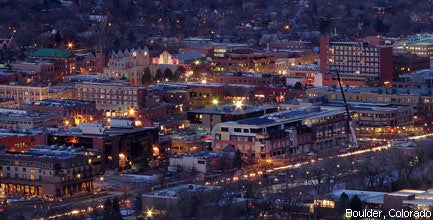 Boulder, Colo.
Boulder's image as a hippie haven belies the city's emergence as a hotbed for innovation. Silicon Valley veterans and aspiring entrepreneurs alike are descending on Boulder for its unique marriage of capitalist ambition and counterculture spirit.

Related Destinations
Logan, Utah
The city is reinventing itself as a tech hotspot with its Innovation Utah program and Cache Business Resource Center, which offers free assistance to fledgling entrepreneurs.

Bismarck, N.D.
The hunting and fishing destination is home to strong and consistent wind patterns that power a flourishing wind-turbine industry. 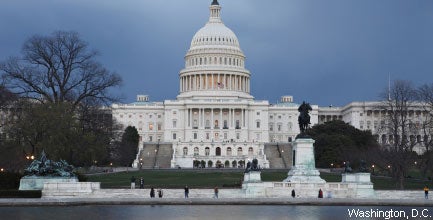 Washington, D.C.
Its pre-eminence as an enclave of political power tends to obscure the city's thriving entrepreneurial culture. Federal employees make up 15 percent of the local work force, and professional and business service jobs are on the rise, buoyed by growth in the education, finance, public policy and scientific research sectors.

Embedded customer base: With a $57,936 median household income, D.C. has one of the nation's most affluent and educated populations.

Chicago
The diverse, culturally intriguing and affordable Windy City is home to a growing number of Web 2.0 companies.

Boston
With its critical mass of universities, Boston remains on the cutting edge of American innovation, offering big city life in the quintessential college town.

Raleigh, N.C.
Raleigh has affordable housing and a natural beauty uncommon for a major U.S. city. It rivals Silicon Valley as a tech epicenter.

3. Recovery and Rebirth
Cities on the mend, where even the smallest business can make a big difference 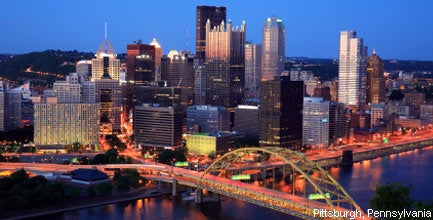 Pittsburgh
Suburbanization and economic turmoil slashed the city's population to just 330,000 by 2000. Steel has given way to robotics, healthcare and artificial intelligence, but Pittsburgh retains the vestiges of its industrial past. Generations of family-owned businesses continue to evolve in response to Pittsburgh's metamorphosis. Officials are redeveloping abandoned industrial sites into housing, retail and office space, typified by the Waterfront and SouthSide Works projects.

Notable fan quote: "Pittsburgh stands as a bold example of how to create new jobs and industries while transitioning to a 21st century economy."
--President Barack Obama, on naming Pittsburgh as host city of the 2009 G-20 Summit

Oakland, Calif.
Oakland is ranked third for cities with businesses owned by women. It's also eco-friendly, generating about 20 percent of its energy use from renewable resources.

Jackson, Miss.
Few cities make it easier or more inexpensive to launch a business: Expect to pay anywherebetween $20 and $150 in licensing fees.

4. Living in Paradise
Why wait until retirement to enjoy a life of sun, surf and sand? 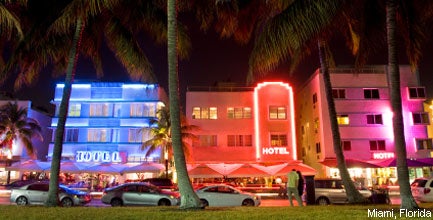 Miami
The Gateway to the Americas, Miami is home to a flourishing global business and finance community. Largely because of its proximity to Latin America, the city houses offices for more than 1,400 multi-national corporations and has the largest concentration of international banks in the U.S. Entrepreneurs here sidestep both local and state personal income taxes, and officials also offer a number of incentives and financial programs for companies looking to relocate.

Related Destinations
San Diego
Renowned for the most hospitable weather in the nation, the city also plays host to an evolving software and new media sector.

Honolulu
Cost of living is high and local time is six hours behind the East Coast, but the natural beauty makes up for the challenges.

Albuquerque, N.M.
Albuquerque gets more than 300 days of sunshine per year and lies at the heart of the New Mexico Technology Corridor, a cluster of high-tech firms along the Rio Grande. 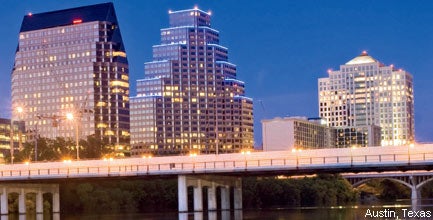 Austin, Texas
Austin's funky, anything-goes lifestyle exists in stark relief with the traditionally conservative Lone Star State. But Austin is one of the nation's most progressive and proactive entrepreneurial centers. Locals wear their "Keep Austin Weird" T-shirts with pride but, in reality, the city's combination of art and commerce couldn't be better adjusted.

$3.5 million: Amount the nonprofit Central Texas Angel Network invested in regional startups in 2009--10 of them in Austin

Don't mess with taxes: Like the rest of Texas, Austin has no state personal income tax and no corporate income tax.

Seattle
The destination of choice for creative types. Tech startups are led by a generation of entrepreneurs who cut their teeth at companies such as Microsoft and Amazon.

Providence, R.I.
The city's efforts to become a center for artistic and tech innovation include Operation Opportunity, a $10 million small-business loan program.

6. Family-Friendly
Five places where company and family can both grow up right 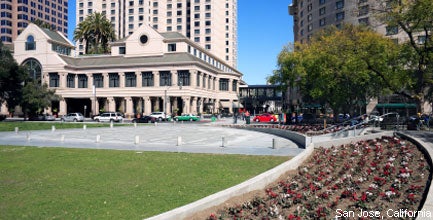 San Jose
San Jose's reputation as a technological mecca remains unimpeachable. The largest city in Silicon Valley, it's home to a bevy of tech behemoths, and local startups receive a wealth of venture capital. Despite San Jose's imposing cost of living, area households have the highest disposable income of any U.S. city with more than 500,000 residents. That, its location and its variety of all-ages attractions make San Jose a flock-to destination for families.

286: Number of high-tech workers per 1,000 people, the largest concentration of any metropolitan area in the nation

Related Destinations
Kansas City, Mo.
As one of the world's premier bioscience centers (accounting for nearly a third of the $19 billion global animal health market), KC is a cow town for the new millennium.

Fayetteville, Ark.
Credit Wal-Mart for growth here. More than 1,300 of the chain's vendor partners have opened local offices, and small business is increasing at 6.7 percent annually.

Milton, Mass.
Local business is tied to the city's rich history, best exemplified by the G.H. Bent Co., a baked-goods manufacturer operating since 1801.

Anchorage, Alaska
With a thriving energy industry and unparalleled natural beauty, Anchorage is also one of America's most tax-friendly destinations: It doesn't charge sales tax.

7. Off the Grid
Five cities where entrepreneurs have the latitude to forge their own paths 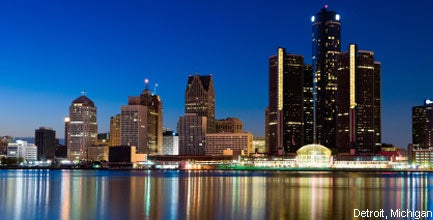 Detroit
Detroit sits poised on the brink of economic collapse--and on the cusp of a post-industrial renaissance. Artists and iconoclasts are moving to this city in droves, purchasing foreclosed properties and relying on solar energy and other alternative solutions to pursue lives and careers outside the margins of mainstream society. Officials are looking to reinvent blighted segments of the city as urban farms. Detroit is dead--long live Detroit.

160: Number of startups in the nonprofit TechTown incubator in central Motown

Related Destinations
Portland, Ore.
Although life in Portland conforms solely to nonconformity, it's also the site of more than 1,200 tech companies.

Boise, Idaho
A uniquely urbane locale with a robust creative community, the onetime supply center for Rocky Mountain mining camps is now the site of a burgeoning high-tech industry.

Berkeley, Calif.
Berkeley still thrives as a nexus of liberal activism and progressive beliefs--along with opportunities in educational, scientific and technical services.

25%: Portion of the 139-square-mile city proposed as agricultural green zones 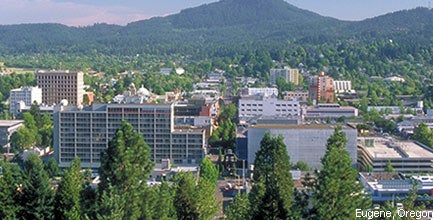 Eugene, Ore.
Eugene is famed for its adherence to natural living--Organically Grown Co., the northwest's largest distributor of fruits and vegetables, launched here in 1982 and paved the way for like-minded startups. Eugene's Sustainable Business Initiative champions the creation of eco-friendly startups and jobs, and the city is now a model for green technologies in action.

85 percent: Amount of energy the city draws from hydroelectric and wind-generated solutions

150: Miles of smog-free transportation in the metropolitan area

Madison, Wisc.
The first city in the U.S. to offer residents curbside recycling also has the Wisconsin Entrepreneurs' Network, which counseled 3,000 businesses in 2009.

9. College Towns
Start a business, and learn a thing or two 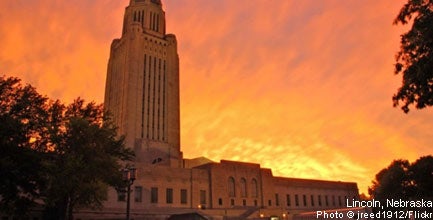 Lincoln, Neb.
The University of Nebraska-Lincoln's Nebraska Center for Entrepreneurship encourages students to consider ownership as a career and connects new ventures with financial resources. The university also plans to develop the Nebraska Innovation Campus on a 251-acre site adjacent to its campus, providing space for public-private partnerships and allowing professionals to access faculty research.

$20 million: Size of the Paul F. and Virginia J. Engler Foundation's gift to the University of Nebraska-Lincoln in March to support agribusiness entrepreneurship

$260 million: Projected annual revenue from the Lincoln Haymarket Arena approved by voters in May

5%: Unemployment rate in the Cornhusker State as of April

Related Destinations
Provo, Utah
Home to Brigham Young University and the second-largest concentration of software companies in the U.S.

Minneapolis/St. Paul
Thanks to the University of Minnesota and other schools, the Twin Cities boast a concentration of 1,300 high-tech firms.

Dubuque, Iowa
Home to five institutions of higher learning, Dubuque serves as the commercial, educational
and cultural nexus for Iowa, Illinois and Wisconsin.

10. Small Towns, Big Opportunities
Small ponds where your business can be a big fish 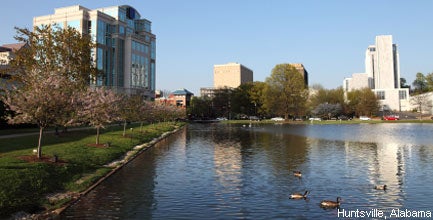 Huntsville, Ala.
Headquarters of NASA's Marshall Space Flight Center and adjacent to the U.S. Army Aviation and Missile Command, Huntsville is known as a thriving aerospace and military technology center. The nonprofit Huntsville Association of Small Businesses in Advanced Technology pledges to expand the horizons of local startups, by promoting contracts with local federal agencies and facilitating the exchange of information between member firms.

Related Destinations
Sioux Falls, S.D.
The self-appointed Best Little City in America is the preeminent metropolis in a state with the country's lowest sales tax rate (just 4 percent) and no corporate income tax.

Bowling Green, Ky.
The Kentucky Transpark is tailored for high-tech firms, featuring educational and research centers along with trails for biking and hiking.

9.4 percent: The boost in Huntsville small-business growth between 2004 and 2007--nearly twice the 5 percent national average for midsized metro areas.