Here's how four ultra-successful twentysomethings leveraged their brilliant ideas into major businesses online. And how you can, too.
Next Article Add to Queue
August 24, 2010 8 min read

Out of Her Closet, a $50 Million Business
Susan Gregg was 17 and heading off to Carnegie Mellon University, and she had a problem: a closet overstuffed with one-of-a-kind vintage shoes and dresses. The solution? Open an online boutique. 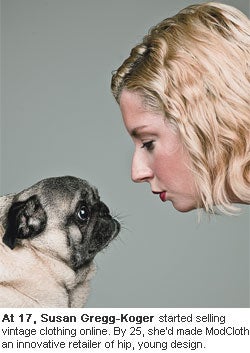 ModCloth.com was headquartered in her dorm room and run with the help of her high school sweetheart, Eric Koger. The two drove from Pittsburgh to their South Florida hometown several times throughout college to haul up stock. By the end of their senior year in 2006, ModCloth was getting 60,000 visitors a month, and plenty of them were asking for more.

Gregg--a double major in German and business, and now married to Koger--knew what to do. First, she raised the capital: $50,000 in credit card debt, plus loans from Koger's uncles, student loans and a second mortgage. Then she hired designers to create an original, vintage-inspired collection. "I Googled, 'Where can I buy wholesale clothing?'" Gregg-Koger recalls. She found the Magic Trade Show in Las Vegas, wandered the booths, asked questions and found her designers.

These days, as co-founder and chief creative officer, Gregg-Koger, 25, still handpicks all the clothes, shoes and accessories featured on the site (most sell for less than $100) and seeks out designers who fit ModCloth's aesthetic. Koger, the CEO, oversees the technical side. The site gets around 2 million visitors every month and is on track to surpass $50 million in sales this year. They've raised $20 million in new funding to open up offices in San Francisco and Los Angeles this summer, and employee numbers are close to 150, and rising.

Gregg-Koger says ModCloth's biggest advantage is the fact that she is ModCloth's ideal customer: "Other companies might say, 'We need to get on this social networking stuff,' whereas it was intuitive for us. If I have a Facebook account, and my friends do, my business should."

ModCloth's future is "social commerce," she adds. That is, in developing a site that involves customers even if they're not actually buying. ModCloth recently introduced a "Be the Buyer" program, which lets customers choose which styles go into production, and a "Name It and Win It" contest. The idea is to leverage crowdsourcing and encourage customers to share and comment--and get excited about clothes that will be available in a few months.

The Patriarch of Mobile Location
Loopt is a quintessential expression of a generation shaped by mobility, interactivity and constant connectivity. In other words, it's the kind of innovation that could only spring from a mind as youthful as Sam Altman's. "People often try to build things for themselves first," says Altman, Loopt's 25-year-old co-founder and CEO. "I built this for my friends." 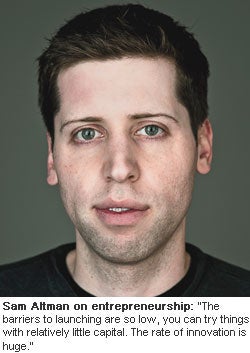 The social-mapping service Altman created when he was a sophomore at Stanford University offers users a real-time virtual lifeline to nearby friends, their present whereabouts and activities. The mobile app's utility is bolstered by details about local attractions and events, including travel directions and reviews from content partners such as Zagat and Citysearch. Loopt also instantly shares status updates with Facebook and Twitter contacts, and even lets users browse profiles of potential new friends within a given area.

Altman is a veteran of the mobile social networking revolution: Founded in 2005, Loopt pre-dates Foursquare, Gowalla and Brightkite by several years. And in what is now a hotly competitive realm, Loopt's focus is product innovation: In June the Mountain View, Calif., company launched Loopt Star, a game that awards users coupons, music downloads and perks in exchange for their checking in to the service from specific destinations. Altman compares Star  to a virtual loyalty card that lets retailers connect directly with customers while they're shopping or looking for a place to eat. The user with the most check-ins at a specific site is the "Boss" of that location, further driving repeat business.

Loopt has garnered more than $17 million in venture financing so far. The company doesn't disclose financial figures, but sales come from content partners and retailers, along with local advertising--which is where the biggest growth opportunity lies.

The Loopt app is available as a free download on more than 100 mobile handset models offered by all four major U.S. providers, including the iPhone. The Loopt network now connects more than 4 million registered users, with hundreds of thousands more signing up each month. Altman expects Loopt to continue to grow at a significant rate throughout 2010.

"Now that mobile phones are a fundamental communications device, the concept of place is becoming increasingly important," he says. "Smartphones are transformational things." --Jason Ankeny

Marketing Guru for the Digital Age
Michael Mothner was on the last round of interviews for a coveted job as an analyst at Goldman Sachs in New York. The managing director looked over his résumé and noticed a company called Wpromote, which Mothner said he had started and had some success with as a sophomore at Dartmouth in 2001. "To call my bluff, he asked why I would want to work for Goldman if my company had been successful," says Mothner, now 29. "That was a defining moment for me. I stood up and said, 'You know what? You're right. I don't think this job is right for me.'" 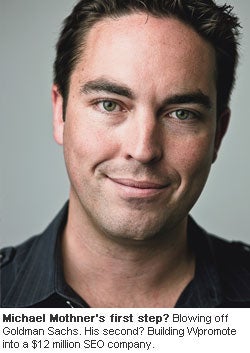 After recovering from the shock, he began building Wpromote, a search engine marketing company that then offered a cheap platform for submitting websites to multiple search engines. This was 2004, and Google was just coming on--but Mothner foresaw its dominance. "I was having a lot of success using Google's pay-per-click services to drive traffic to my company," he says. "So I came to the conclusion that there was a market for helping consult and manage these PPC campaigns for other people."

Wpromote did just that, launching a tiered service that helped people create PPC campaigns, choose keywords and manage bids. In the process, Mothner and his team were learning a lot about what elements helped websites get better Google rankings, so Wpromote offered a search engine optimization service too.

Today Wpromote, based in El Segundo, Calif., has 62 employees providing PPC, SEO, web development and social media advertising to 2,300 clients, including Hewlett-Packard. It had $8.5 million in sales for 2009 and expects to book at least $12 million to $13 million this year. Plus, Mothner plans to run Wpromote as if he will own it forever: "I think it is dangerous when people build companies with the sole intention of selling them." --Joel Holland

The New Food Democracy
There's a Spanish proverb that says, "The belly rules the mind," but sometimes the two operate in perfect harmony. Just ask Emily Olson: While working as a brand manager for The Fresh Market, a gourmet supermarket chain, she saw how artisanal food startups struggled to land on retailers' shelves. 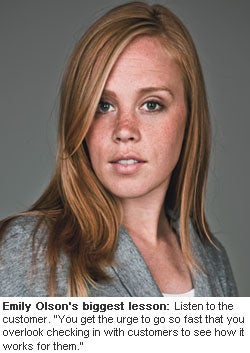 "Just because something tastes awesome doesn't mean it can make it into stores," Olson says. "So I started thinking 'How do we democratize this?'" Olson, now 26, teamed up with Rob LaFave, 27, and Nik Bauman, 26--friends who shared entrepreneurial ambitions dating back to their time at Virginia Tech. Their search for alternative distribution models led online, a natural progression for twentysomethings raised in the Amazon.com era. The result, inspired by the crafts site Etsy, is Foodzie, a web marketplace that connects small vendors with shoppers across the U.S.

Foodzie offers small producers a free platform--a virtual farmer's market--to promote and distribute their meats, cheeses, produce, snacks and sweets. Vendors can set up their online storefronts, complete with photos and the philosophies behind their products. Foodzie processes all transactions, even sending sellers prepaid shipping labels once a purchase is complete.

"Our products come from people who are passionate about what they're making--often there's a story behind what they're doing, like a family recipe," Olson says. "We want products with a personal connection. And we want them to be delicious, not mass-produced.

She and her fellow Foodzies developed the model under the auspices of the Boulder, Colo., incubator TechStars. Their mentor, Jeff Clavier, founder and managing partner of SoftTech VC, later spearheaded a $1 million seed investment in the San Francisco-based platform, which went live in December 2008.

Foodzie hosts nearly 400 sellers nationwide and claims a 20 percent cut of all purchases made through the site. Though Foodzie doesn't disclose revenue, Olson says midway through 2010, Foodzie is on track to quadruple its 2009 sales. Top sellers include the Skillet Bacon Jam ($37) and Cheesecakes in a Jar ($36.45).

Now Olson and company are exploring ways to help vendors distribute their products both online and in stores--and not limiting Foodzie to being a direct-to-consumer distributor.

"Our mission is to help smaller food producers become bigger businesses," she says. "There is growing consumer awareness that you can still support small producers without breaking your budget. More than ever, people really care about where their food comes from."