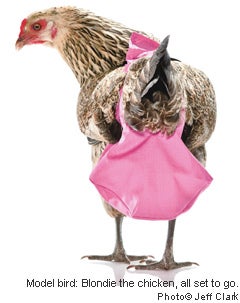 What possessed her: Haldeman moved to rural Hot Springs in 2002 and promptly took in a couple of orphan chicks. She soon discovered chickens poop--a lot. In the interest of keeping her house relatively clean, Haldeman broke out her sewing machine and designed a roomy cloth diaper with a disposable liner. As time went on, she made them in several sizes. Chickens, it seems, outgrow their diapers.

Startup: Basically, no costs. The first diapers were made from fabric scraps. When orders started pouring in, Haldeman ordered a few bolts of cotton blend and tricot, and built a website where a small, hand-sewn diaper sells for $9 ($14 for big birds).

Payoff: Haldeman inspired a flock of imitators, and for competitive reasons will not disclose revenue. "My little venture took on a life of its own and dragged me willy-nilly into it."

Why this is serious business: America is having a chicken moment. The ranks of pet-chicken owners are swelling (to more than 60,000--up from 35,000 just a year ago, according to BackYardChickens.com). The diapers let owners spend quality time with their birds without having to deal with major stain removal afterward.

Customers: Chicken fanciers from across the U.S., plus Canada, Australia, New Zealand and the U.K. Most order a couple of diapers at a time, though one woman ordered 20 in various colors ("She had just two birds and spoiled them rotten," Haldeman says). Since birds come in all sizes and shapes, owners should measure the bird carefully before placing an order. Birds old enough to have stiff tail feathers can wear a diaper, but Japanese bantams require low-rider diapers.

"Aha" moment: Posting the pattern on Yahoo!'s "House Chickens" forum. It caused a stir, but most chicken fanciers didn't want to sew one--they just wanted to buy one.

2011 and beyond: Haldeman is looking to hire extra help. Right now she can't keep up with the back orders.