Filter Publications knows you can't sit still when serving a subscriber base with the need for speed.

The Morgantown, W.V.-based print and digital publisher's motocross and supercross news websites (including Racer X Online) welcome 425,000 unique action sports enthusiasts each month. But with a growing number of readers turning away from the desktop in favor of smartphones, Filter recognized its obligation to follow their lead--or get left in the dust.

"It's important to us to be the worldwide authority on motocross and supercross news, and that means getting information to people however they want it," says Filter Publications president Bryan Stealey. "A mobile application seemed like the obvious way to go." 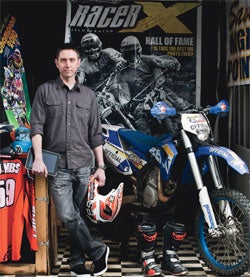 "The cost of building mobile applications is ridiculous--even a simple app can cost $100,000 or more, and it can take months to develop," says AppMakr founder and president Sean Shadmand. "We don't feel it's right that the people with big pockets are the only ones getting their information out. Everyone's information is interesting. So we designed a completely automated system where apps are totally free to publish and build."

AppMakr's algorithm predicts the likelihood of app store approval, flagging potential problems and recommending necessary changes. Once apps are available for download, users can track progress via the AppMakr dashboard, push out new information to consumers and work on app upgrades.

As of January, the AppMakr platform was responsible for about 3,500 iPhone apps in all, translating to more than 1 percent of Apple's total App Store inventory. Alongside Filter, everyone from PBS NewsHour to the PGA Tour to gossip guru Perez Hilton has used the service to make their media content mobile.

"We've eliminated the complexity from the creative process," Shadmand says. "We give you all the tools you need, and then we get out of the way. We don't tell users what to do, but we are here to help them."

As of January, the AppMakr platform was responsible for about 3,500 iPhone apps in all, translating to more than 1 percent of Apple's total App Store inventory.

AppMakr offers premium phone support for customers who run into significant trouble during the development process. According to Shadmand, most of the company's revenue derives from software licensing and white-label products.

"I'm not a programmer, but AppMakr is something that's easy to use, and something I could understand," Stealey says. "It makes it easy to disseminate news, information and video, and do it efficiently. It not only enables us to deliver our content in a different way, but it's also opened up a new revenue stream by allowing us to sell targeted ads."