An Entrepreneur With a Cheeky Message and a Social Conscience

Mathew Gerson was already familiar with the ways conscience and commerce intersect when he had a "eureka" moment.

Gerson--who in 2005 founded online retailer Econscious Market, which sells eco-friendly products and donates up to 10 percent of the retail price of each sale to charity--was reading a book about Dr. Paul Farmer, co-founder of Partners in Health. 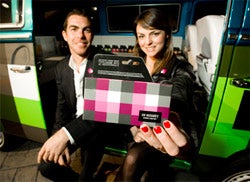 "It came as a huge shock to learn that condoms, which are fairly inexpensive to make and the most effective way to treat the HIV pandemic other than abstinence, were not readily available to those who needed them the most," Gerson says.

In 2009 Gerson founded Sir Richard's, which donates one condom to a developing nation for every one sold. He says his inspiration came not from B-school but from Buddhism, which he studied for five years after college. "That's where most of my ideas about human potential and human well-being were developed," he says. Somewhere in there, too, was the spirit of his grandfather, a Russian immigrant who started the industrial equipment manufacturer Phillocraft.

This summer, the brand was honored with CLIO and Dieline awards for packaging design, and it's now preparing for its first official condom distribution this winter in Haiti. Working with Haitian photographer Marc Baptiste, the company designed a special condom named the Kore. Partners in Health will oversee distribution. "We recognize that we are a brand helping on the supply side," Gerson says.

Until then, you can find him cruising around the West Coast, passing out condoms and information in "Lucy," a blue-and-green plaid-wrapped 1971 VW bus he calls the Sir Richard's "road ambassador." With music flowing from the speakers and interactive features like an on-site photo booth, is it any wonder Lucy makes fans wherever she goes?

Gerson points out another big draw: "People always seem ready to talk about sex, if an environment is created for them to do so."