Is There Proper Etiquette for Videoconferencing?

Video conferencing is one of those things that we all generally endorse but is still new enough that we haven't fully adapted to it. We're not yet sure where to look. We're not sure when to speak. We're not used to seeing exactly what we look like when we're pretending to be interested.

And that's the thing: Video conferencing assumes that seeing people (and ourselves, if we want) is a virtue. We could argue against this. We could argue that seeing people is totally overrated. But we'll do that some other time. Anyway, video conferencing allows us to see things, too. Which can be extremely helpful. Especially if the thing is a product we're trying to get someone to buy. Or a handy chart on an easel. Or a thumb in the up position.

Video conferencing isn't a combination of talking on the phone and meeting in person. It's its own thing, with its own set of rules, which pretty much come down to this: "If you're not speaking, you have to remember that the other five, six, seven or eight people participating are also watching you," says Bob Kirk, CEO of Avistar, a visual communications provider based in San Mateo, Calif. "People tend to forget that if they're not speaking, they're also still being viewed."

And this: "Video has a 'multiplier effect,'" says Lew Epstein, general manager of advanced applications at Steelcase, a furniture products company in Grand Rapids, Mich. "When you add a multisite call, you're looking into several rooms simultaneously and vice versa, so each impression you make when you enter that room is magnified and multiplied."

Video makes everyone a subject. Even when we're not speaking. So, consider some rules about just being in a video conference:

It's an instinct to look at the person you're speaking to, of course, but on a video call, it makes you look squirrelly. Acknowledge what the video-ergonomists call "focal difference." When you're not speaking, look at the screen on your desktop. When you are speaking, look at the camera. If you don't, you look like you're looking off in the distance, which is what people do when they're lying.

And no multitasking. "Multitasking is painfully obvious," says Avistar's Kirk. "You can tell because their eyes are wandering across the screen." You can also tell because you hear the sound of clicks, which indicates using a mouse, typing an IM or practicing a tap routine--none of which connote respect for the subject at hand.

And if you're at home, maybe don't sit on the couch. Or lie in bed with the computer on your chest. Both of those positions create what the painters call a "foreshortening," which is not flattering. The human form is not meant to be gazed upon in this way. Nostrils get involved. And chins.

The most underrated part of a video call is the area around you--your immediate milieu, if you will, and if you're pretentious--because your setting says as much about you as the points you're making. Before the call, take a quick look at what's in the camera's field of view--especially if you're videoconferencing from home. Or if the meeting is a momentous one. Tidy up a bit. Train the camera on an area free of plush toys. Maybe throw Self-Hypnosis for Dummies in a drawer. Move the Oreo Shake a few inches to the left, out of the way.

For advice on staging a background for video, we could look to the presidents. Take the Oval Office address, for instance. The president is not sitting in a high-traffic area, first of all. And behind him you only see curtains, maybe a little lawn and a credenza with a well-considered array of objects--emblems that suggest certain values: framed family photos (Obama, both Bushes, Clinton, Reagan); small busts of other presidents (Clinton); a pair of metal objects resembling andirons … possibly trophies … possibly bowling trophies (Ford); or nothing at all (Carter).

The point is this: Think about your environment. Know what's on your credenza. Maybe throw some framed family photos on it. And if you think you don't have a credenza, you do. We all have a credenza.

In summary, the video call is an easy situation to master, because the expectations are low. You just need to check the picture-in-picture to see what others see. You have to be aware of what you look and sound like, and what your environment says about you. And once all that's taken care of, maybe say something really smart--after a pause of exactly two seconds.

1. The smaller the headset, the better, although a headset will always make you look like Control-era Janet Jackson. There's just no way of getting around it.

2. Be more or less like a news anchor: Sit up straight, smile, try not to seem vacuous.

3. The news anchor rule notwithstanding, never say, "Over to you, Bill." Or "Take it away, Susan."

4. Especially if no one on the call is named Bill or Susan.

5. Easy on the stripes. Striped clothing can create a "strobing" effect for the person on the other end.

6. Jokes are about 30 percent less funny while videoconferencing.

7. Stifling a yawn is as obvious and demoralizing to others on a video call as it is in person.

8. Maybe don't put your head in your hands. Or on your desk. Or between your knees.

11. Smoking is prohibited. Unless you're videoconferencing with the French. In which case, it's encouraged.

12. And even if you don't think you need to, always wear pants.

The Thing About Lag

Let us all collectively agree to wait two seconds before speaking on a video call. Unless you have an advanced system, there's always a little lag. That lag causes problems. 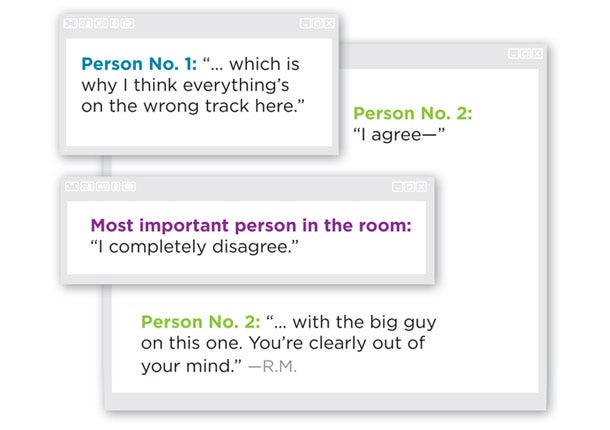 Frustrated With a Colleague? Expectations May Be Why.