What Every Entrepreneur Needs to Know About Public Speaking 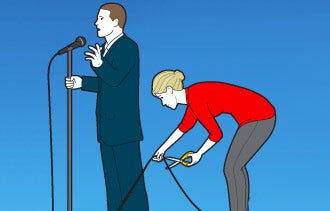 Important Thing to Note No. 1: You're not as bad a speaker as you think. "When we have people give talks in shyness groups, they often do much better than they thought they did. There's a tendency to underrate your performance when you're feeling shy," says Dr. Lynne Henderson, director of the Shyness Institute, a nonprofit in Berkeley, Calif., that's dedicated to researching and developing manuals on social anxiety.

Important Thing to Note No. 2: A little anxiety is good.* Because it means you care. You just need to care about the right things. And the right thing in this situation is: the audience. The last thing the audience wants to do is sit there for half an hour and watch someone fidget and have difficulty speaking. They want to listen to someone who is in control. Because someone in control is someone who can help--someone who can help them, specifically.

Audiences are selfish. Which is the key to everything.

The First Part
Look at these people. No, really--look at them. How can you help them? How can you make a difference to them? What do you have that they need?

"Make eye contact. Square up your shoulders with your audience. It takes the spotlight that's shining in your eyes and turns it the other way," says Nancy Ancowitz, business communication coach and author of Self-Promotion for Introverts. "You're saying, I want to look at these people in front of me and really see them and provide something of value to them."

Looking at your audience--assessing them head-on--is the same thing you would do in any conversation. And all speeches should be conversations, even though you're the only one talking. And in order to have a conversation, you have to assess the audience on a personal level. It helps to acknowledge them--not in a vague way, in a specific way. "I'm delighted to be here" isn't as good as "I'm delighted to be here to talk with you."

And then, very clearly, and without much abstraction, tell them what you aim to do.

"State the facts about what you have to offer that will help the lives of the people you're talking to, and put yourself in their shoes," Ancowitz says. "What do you have? What do they need? Where does it overlap?"

"I'm here because …" is not a bad way to start things off. Any situation that's loaded with importance and process and false interaction, such as a speech, is best begun by deflating the whole thing. So tell them what you're going to talk about. Then establish your authority. Let's assume that part of the speech involves the story of your business. That's a great story to tell, because you know it better than anyone else. And everybody likes a well-told story.

The Story
The three best pieces of advice ever doled out in the Esquire offices:

1. The subject can be boring, but the story cannot be boring.
2. You're in charge of the story.
3. People won't miss what isn't there.

All this works for a speech, too.

Your speech might not have a riveting subject, but the speech itself must not be boring. You're in charge of the speech. And you should move things along at a pretty good clip.

Paint a picture--an impressionistic picture. But every now and then, get specific. "Give the audience something to take away. Ideas, tips, rules--something useful," says Dr. Karl Albrecht, an executive management consultant and author of the book Social Intelligence: The New Science of Success. "After all, they're there for selfish purposes." But let those moments be way stations. You're in charge. Move things along. 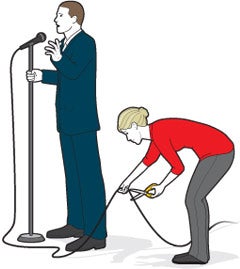 Is this thing on?

Can I get a witness? (even ironically)

A great man once said …

Are you picking up what I'm putting down?

Is anyone else warm?

Four score and seven years ago …

In conclusion, I'd like to tell you a story. It all started way back in …

What You Look Like
Be cool. Your energy level during a speech should be somewhere between "excited to be here" and "mildly enthused to be here." Says Ancowitz: "There's no need to push; there's no need to talk loudly; there's no need to be insistent, to pressure people." There's no need to sell, is what she's saying. Selling can be off-putting even when it's happening at an appropriate time. Onstage, it's excruciating. Think of a great historical speech. Every great speech involves selling something, but the selling is the subtext. The main point is information.

And maybe don't move around all that much. "Do you dance onstage?" Ancowitz asks. (We'll go ahead and answer this one on your behalf: No.) "Well, if you're in front of a group, you want to keep your feet grounded, and/or work the space. But you don't want to be moving without any purpose."

How to Wrap Things Up
Asking if anyone has any questions at the end of a talk and then waiting for someone to raise their hand is the equivalent of five people trying to split up the check three ways at the end of a great meal. It's an awkward way to cap off an otherwise wonderful experience.

Allowing people to talk isn't the problem. The problem is that no one feels comfortable until someone volunteers. So the best way to wrap things up is to ask people to raise their hands if they have questions (or to just yell the questions out) and then: Just keep talking. The hope is that you will get interrupted.

Your goal should be to get to a point where you can say: "We have time for only one more question." Which is a beautiful thing. It means you provoked them. You showed them what you can do for them. It means they understood what you can do for them and they want to know more about how your story can meet their needs. Which suggests that you're doing good work--onstage and off.

*If you have a severe problem with anxiety, you should stop reading this column and call a professional for help. Read this column in the professional's waiting room. Because it doesn't have to be this way. 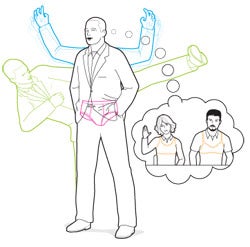 Do not poll an audience of 10 or fewer people by a show of hands.

Do not imagine the audience in their underwear.

Do not imagine yourself in your underwear.

Thank no more than three people at the beginning.

Keep your hands out of your pockets.

Unless you're a stand-up comedian. From the 1960s.

Do not close your eyes in a dramatic fashion at a key point in the speech.

Do not move your arms in a dramatic fashion at a key point in the speech.

Or someone else's arms, legs or hips.

Leave the pounding on the podium to the dictators.