What Makes a Perfect Collaboration? Weakness, Conflict and Doughnuts

By Ross McCammon June 22, 2012
This story appears in the June 2012 issue of Entrepreneur. Subscribe »

To collaborate with another person is to admit weakness. There's no way of getting around it. If you weren't in a position of weakness, you wouldn't need anyone else's help. When engaging in a collaboration, you're saying, I don't know how to do this on my own. You're both saying that. You're co-failing, really. Which is the best way to start a partnership. Because along with vulnerability comes trust. And trust is everything.

Who to Collaborate With
There are two criteria. You want a peer, obviously--you can't have a true collaboration with someone who is above or below you hierarchically. But more important than a peer, you want a complement. You need a Jobs to your Wozniak, a Hall to your Oates, a rhino to your tickbird. You want someone who knows as much as you do, just not about the same things.

"The fact that I don't have any technical background means I'm not impeded by my knowledge of what it's going to take to build something, so I'm free to just dream up features and ideas," says Cyrus Farudi, founder along with Omri Cohen of Capsule, a web and mobile app built for event planning, group interaction and photo sharing. "Luckily, my partner, who has a technical background, has a very ‘yes, it can be done' attitude. There have been screaming matches when I've tried to get too involved in something on the tech side."

Related: It helps if your collaborator is a person you don't like all that much--or at least is someone with whom you're always on the verge of arguing. Tension can produce wonderful things. It has to.

"Collaborating is about co-laboring," says Nilofer Merchant, innovation expert, Harvard Business Review columnist and author of The New How: Creating Business Solutions Through Collaborative Strategy. "It's not about hugs. I think people think about it as this positive thing, but it's really about how you solve tough problems that neither party could solve on their own."

If you've chosen someone based only on skills and intelligence, there might be a personality conflict that, under normal circumstances, could lead to a standoff. But you're a team, so conflict over personalities would be distracting and frivolous. Sure, the tension of your differences might push both of you right up to the point of failure (the brink of doom, we'll call it). But there are two reasons you're not likely to go over the brink of doom: One, your fate is connected (by the handcuffs of mutual interest, for lack of a better metaphor); and two, because a lot of great ideas happen right before people fail--a kind of adrenaline kicks in, which keeps you from creative inaction (the abyss of "Man, we got nothin'"). The point is: Collaboration is harnessed conflict.

The Meeting
A good way to start the meeting is to say: We know what the goal is, but we don't know how to get there. "You have to have the difficult conversations first," says Jim Moran, co-founder, president and COO of Yipit, a New York-based deals aggregator and recommendation service. "You have to determine who is better at what. That transparency will make everything flow."

To ensure transparency, we've developed a set of four proclamations with which every collaboration should begin: 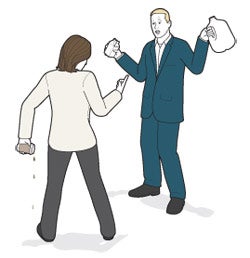 (In business texts you'll often find this referred to as the YMGDI, or the You Me Goal Doughnuts Imperative.)

The rest of the collaboration can't be codified. It shouldn't be. A meeting in which two people are collaborating is a secret place defined by its own rules and rhythms. To offer up techniques for such interaction would be to undermine the sacred bond between two people working together under a cloak of mystery to solve an important problem.

Well, actually, there's this one technique that intrigues us--as contrived as it may be. It's called "behavioral mirroring." The neurologists believe it happens subconsciously--on dates and during job interviews, especially.

"It's nonverbal behavior beneath people's awareness, but you can get skilled at doing it deliberately," says Steve Kozlowski, professor of organizational psychology at Michigan State University and editor of the Journal of Applied Psychology. "You mirror the subtle behaviors of others during an interaction. It's part of the attraction process. It tends to build rapport."

So if your cohort laughs, you laugh, too. If your cohort slumps in his chair, you slump. If your cohort raises his eyebrows, you raise yours. If your cohort uses the term cohort, momentarily disengage behavioral mirroring because you don't want to be the kind of person who throws around the word cohort.

A Few Words About Credit
If you're concerned that you won't get specific credit for your specific ideas, realize that you won't get specific blame when your ideas specifically don't work out so well, either. "Sometimes people ask: If we create something together, then how do I get credit?" author Merchant says. "But with a collaboration, it's hard to know either who to praise or who to blame, and there's a lot of leadership work that says you ought to know who to choke later."

More important, who would want to establish individual credit for something that came out of a two-person collaboration? That's not just a professional issue, that's a moral issue. It's an abuse of the trust. And when you abuse the trust inherent in a collaboration, you're undermining the unit. You're undermining you: You, but better; you, but smarter; you, but twice as likely to come up with something brilliant. 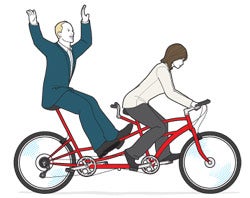 Key Technical Matters
When collaborating, a period of silence is an important tool for resetting creativity.

Unless it lasts for more than 30 seconds, in which case it is a staring contest.

Which is fine as long as your goal is to innovate new approaches to staring. Or contests. Or the eyes. Or the soul. Or inaction.

Unless those notes strictly involve doodling.

Especially if the doodling involves concentric circles symbolizing the rings of hell.

The best environment for collaborating is neutral territory: a conference room, a coffee shop, a bar.

The worst environment for collaborating is non-neutral territory: your office, your car, a 4-by-4-foot area delineated by masking tape and labeled "The MeZone."

Collaboration is 34 percent less effective when done via videoconference.

71 percent less effective when done via literally yelling across a divide.

Collaborate is a verb.

Coendeavor is not a verb.

Cothink is also not a verb.

Cocoa is sometimes nice if you're collaborating during the winter.

Ross McCammon is an articles editor at GQ magazine.