Food and Beverage Trend for 2014: The Rise of Craft Distilleries

By Jason Daley November 19, 2013
This story appears in the December 2013 issue of Entrepreneur. Subscribe »

When Bill Owens held the inaugural meeting of the American Distilling Institute in 2003, 86 people showed up, most of them old faces from the tiny world of craft distilling. For the organization's 10th annual conference in April, more than 900 folks packed the Sheraton in downtown Denver. "There were kids with tattoos, doctors, lawyers, veterinarians," Owens says. "There were people with master's degrees and Ph.D.s. These are people who know how to make business happen."

Craft distilling, like craft brewing before it, is in the midst of a boom. Less than a decade ago, there were 70 distilleries in the U.S. Now there are 623, producing everything from whiskey, gin, vodka and rum to less-common spirits such as absinthe--and all the schnapps in between. Owens believes the number will rise to 750 by the end of 2014 and that the market will be able to support 1,000 independent booze-makers within a few years.

So why such rapid growth? Owens says distilling is the last piece in the artisan renaissance that has reshaped consumerism. "Every town in America has a coffee roaster, little bakeries and a brewery. Look at all the vegetable growers and cheese-makers," he says. "There's a huge amount of pride in physical work. There's no pride in going to an office building and sitting in a cubicle. Distilling is part of that."

But people who start distilleries aren't the same as those who make beer in the basement or raise chickens in the backyard. Craft distillers tend to be well-capitalized professionals with strong business plans and patience. 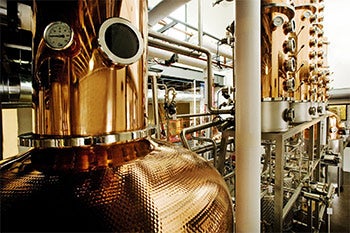 After years working in completely different industries, in 2012 Mary and Pat Scanlan and Mark Kleckner started producing vodka from heritage varieties of potatoes in the Woody Creek Valley outside Aspen, Colo. Unlike commercial producers that use commercial ethanol, grain or discarded potatoes, the team behind Woody Creek Distillers picks, cleans, mashes and distills its potatoes within 24 hours for an ultra-premium product made from 100 percent local ingredients. After producing 10,000 cases last year, they hope to scale up to 50,000 or 100,000 cases in the next five years, and they've also started producing brandy and whiskey.

"People are getting smart. They're asking how their liquor was made, what it's made of and what's up with the stuff they've been drinking all their life," Kleckner says. "People are starting to look beyond all the marketing and hype. Because of that, craft distilling is going to benefit."

Scott Bush, who has revived Iowa's famed Templeton Rye--a popular whiskey during Prohibition and Al Capone's drink of choice--thinks craft distilling is filling a vacuum that the big distillers failed to capitalize on. "There was a need for innovation in the spirits industry for a long time," he says. "They hadn't done anything new or different for so long that people naturally gravitated to craft brands."

But craft distilling isn't just about expanding market share behind the bar. Many distilleries are opening tasting rooms and gift shops, and their impact on local economies can be huge. "The future for these places is in becoming tourist destinations," says Owens, who knows of craft distillers bringing in $30,000 per month from their gift shops alone. "People don't realize how much life they bring to their communities with breweries and distilleries."