3 Student Startups That Are Going the Distance

By Jason Daley October 3, 2014
This story appears in the October 2014 issue of Entrepreneur. Subscribe »

Anyone who has made it through college knows that ideas are cheap. Every conversation in the classroom, on the quad or at the coffee shop is littered with them--some great, most awful. On occasion, the spitballing even spawns a bit of short-lived business action (witness all the broken links on any Best College Startups internet list from the past few years). o Clearly, it's not just an awesome idea that makes a college startup great. It takes follow-through, patience and business smarts to transform a dorm-room musing into a viable business. Here are some college startups that made the leap from good idea to great company.

In 2012, Spencer Quinn was a junior at Brigham Young University in Provo, Utah, working a summer job at a company that sold athletic tape, when he heard about a doctor who used medical casting tape to fix an all-terrain vehicle. It was an "aha" moment for Quinn, a biotech major.

Along with his cousins Reed and Chris Quinn and brother-in-law Derek Rowley, Quinn attempted to repair household items using casting tape. "I thought maybe this stuff could fix more than bones, so we started putting it on broken tools, leaky pipes and other stuff," he recalls. "It was not a good solution." 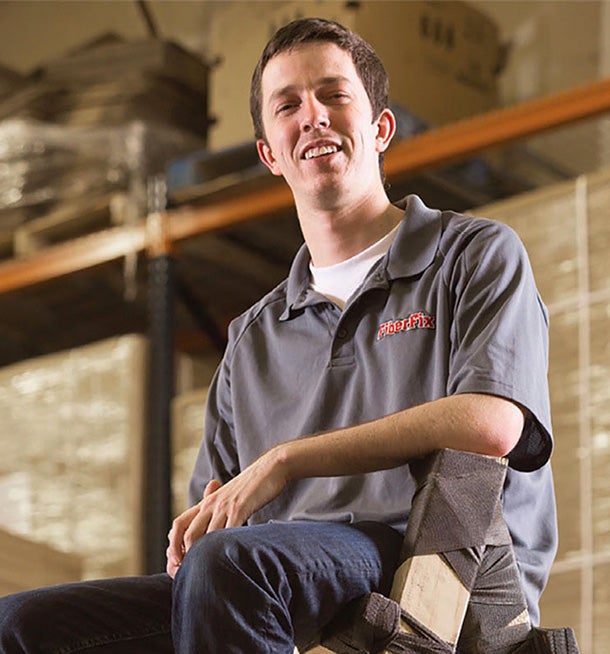 Those efforts didn't work, but the trio got to thinking about what elements would make a better repair tape. The product would have to go beyond duct tape to create a permanent bond, and it would need to be waterproof and able to withstand impact and heavy loads.

They worked with the BYU mechanical engineering lab to find a solution. Once they had a prototype, they took it to an adhesives manufacturer to work out the production process. The result was FiberFix, which, after being soaked in water and applied tightly, can permanently repair shovel handles, leaking pipes and just about any other broken object.

But creating FiberFix was just the first step. "I think so many products fail in the manufacturing and logistics stage," Quinn, now 25, explains. "You have to learn how to approach big retail buyers and know how to execute your product in such a way that you don't get chargebacks that kill the company. After that first sale, 99 percent of the work is still ahead of you."

The team worked trade shows, demonstrating their miracle product to hardware and construction experts, and entered their idea in competitions. They won events at BYU and placed second in the International Business Model Competition. But their biggest coup came in October 2013, when they were featured on TV's Shark Tank, where they convinced judge Lori Greiner to invest in their concept.

That led to multiple stints on QVC, where they sold 45,000 rolls of FiberFix in 10 minutes. The product is now carried at 10,000 retail locations, including Home Depot and Lowe's. More than 1.3 million rolls of FiberFix have been sold at $6 to $10 each.

Despite the success, Quinn and his business partners are dedicated to finishing their education, though on a more relaxed schedule.

"I was initially nervous that I wouldn't get enough support from my professors to do both things, but I haven't found a single one that wasn't excited about the opportunity and supported us," says Quinn, who hopes to expand the FiberFix product line over the next three to five years before selling the company. "BYU has lots of entrepreneurs and great talent. I think everyone here likes a good success story and wants to be a part of it in some way."

Let's go to the tape

Lindsay Stewart was a TV news producer in Los Angeles before enrolling at the Wharton School's San Francisco campus in 2012. The idea was to get a few letters behind her name to help make her way up the ladder on the management side of the media business.

In one of her classes, students were asked to pitch a business idea. For several years, Stewart had been thinking about the inefficient ways news outlets acquire video footage. Deadline-focused assignment editors are often forced to buy tape sight-unseen from third-party stringers; at times they even contact people through YouTube. News stations go to air with whatever images they can find, good or bad. On the flip side, Stewart knew great photographers and videographers who missed out on work because they had no way to communicate directly with editors. And the payment process was equally slow and messy.

When she proposed her idea of an online exchange where editors could view and purchase news footage, and photographers (and the public) could show their work and find assignments, her classmates were intrigued. But it wasn't until fellow student Brian McNeill filled her Dropbox with plans and calculations that she realized her concept, which she dubbed Stringr, could be a viable business. 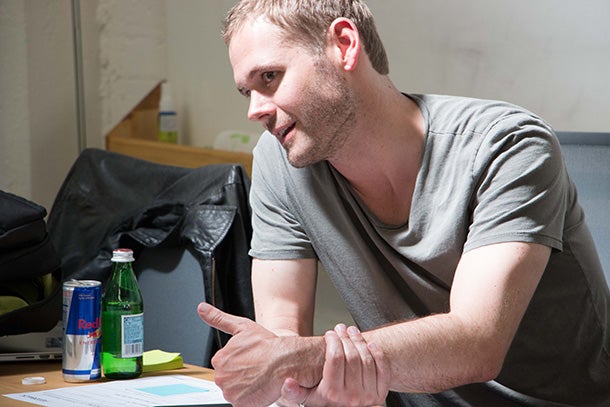 "It was having someone throwing their weight behind my idea that was the genesis of Stringr," Stewart says. "You can go to the best business-school program, but it's not so much about the academics as it is who sits next to you. Classmates helped write the business plan and build the tech stack. They gave me all that human capital for free, and that's what helped us launch Stringr."

Through the rest of their time at Wharton, Stewart and McNeill, both of whom graduated in May, refined their concept. They're now based at the San Francisco media accelerator Matter, where they have five engineers on contract. Stringr, which launched a three-month pilot in the San Diego news market in August, plans to roll out to several more pilot cities before expanding to newsrooms around the country.

Unlike other college entrepreneurs, who often have nothing to lose, Stewart, 34, and McNeill, 37, are taking big mid-career gambles with their startup. "I think doing something like this is totally different than when you're younger," Stewart says. "There are more risks--I sold my house to do this; I'm not taking a salary. But my contacts are wider and deeper; I'm able to navigate and sell to bigger companies. I'm not a 19-year-old selling a pipe dream."

McNeill, who tried to start a tech company during the dot-com boom of the late 1990s, agrees that things are different this time around. "Without a network or capital to get you down those first 50 yards, starting a business is extremely difficult," he says. "At the same time, the opportunity loss is high. I walked away from a partner-track job at Ernst & Young. But leaving that behind has given me more confidence in what we're doing."

The founders agree that their entrepreneurship classes helped them clarify their once-hazy expectations. "One of our professors ended our class by giving us the stats on our education and experience," Stewart says. "He said less than 1 percent of the population was as prepared as [we were] to start a business, and he ended by saying he hoped we would try. That was very inspiring. This is not just an idea for me. I feel passionate about it."

For all the debate about healthcare in the U.S., it's easy to lose sight of the fundamental problems plaguing medical systems in other parts of the world. In developing countries, people often die from lack of basic medicines, blood or operable surgical equipment.

During one of her first classes at the University of Michigan in Ann Arbor, chemical engineering major Carolyn Yarina stumbled upon this reality. Assigned an open-ended engineering challenge, Yarina turned to a campus club that had recently surveyed rural health workers. One of the needs in Africa, the survey found, was a centrifuge that could run without electricity, allowing clinicians to diagnose and treat diseases in areas without power.

Yarina took on the challenge, and by the end of the semester she and a team of students created a human-powered centrifuge built from bicycle parts. It was a neat engineering feat, and Yarina didn't want the idea to die with the end of the class. So she created a student group called CentriCycle to continue work on the project. She also enrolled in entrepreneurship classes, including a practicum in social entrepreneurship, which convinced her to go to India for the first time.

"I learned a lot on that trip, which led to a lot of changes," she recalls. "I realized what they needed on the ground, and using a bicycle was not the best idea." 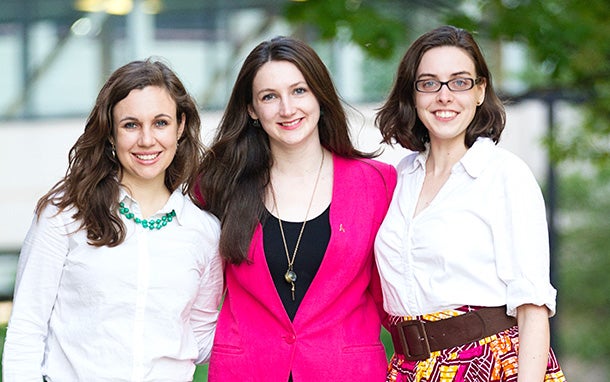 Returning to India over the next two summers, she refined her concept and developed contacts. After graduating in 2013, she worked on her centrifuge full time, eventually developing a portable machine dubbed (r)Evolve that can alternate between manual power and electricity. She also lined up engineering and manufacturing support in India.

But it dawned on Yarina that she needed to go further. "Once I created our student organization and started going to business classes, I had an epiphany," she says. "Open-source designs are not a viable option if you actually want to get your product out there. If it was just about creating a process to separate blood, we would have been done four years ago."

Early this year, she and CentriCycle member Katie Kirsch teamed up with another University of Michigan grad, Gillian Henker, who is developing Hemafuse, an auto-transfusion pump for blood. Together, they started Sisu Global Health, a socially conscious for-profit company, as a platform to deliver medical products designed specifically for the needs of developing countries. The centrifuge and auto-transfusion pump are their first two offerings.

"Eighty percent of medical products are designed for 10 percent of the world," Yarina explains. "Designing for that other 90 percent is what we want to do."

The 24-year-old says she never expected to be at the helm of a company, but she's glad her life has taken this turn. "During freshman orientation they took us on a tour of the Center for Entrepreneurship. I remember I couldn't wait to get out of there," she says. "I never thought I'd do anything with entrepreneurship. After learning how to turn this idea into something that could impact people's lives, I've realized entrepreneurship can be more about making an impact than making money."