Ford | Brand Spotlight Partner What is this?

For Far Flung Outdoor Center, Wowing Guests on Arrival Is a Must

Catering to outdoor adventure seekers requires the right combination of ruggedness and comfort. Far Flung has mastered that equation, and its new Ford Transit Wagon 350 HD is a great fit.

Visitors to Far Flung Outdoor Center in Terlingua, Texas, might have a hard time getting to this gateway to Big Bend National Park, but once they arrive, there’s no shortage of things to do: float trips down the Rio Grande River, SUV and ATV tours, hiking, biking, special events such as wine tastings and gourmet meals. They can stay in one of Far Flung’s Big Bend casitas (Spanish for “little house”), rent equipment for solo expeditions or participate in one of the many guided excursions.

But make no mistake, this is desert wilderness, and Far Flung is responsible for moving a lot of people around safely, reliably and comfortably. That’s always been a challenge for the company, but it’s become much more manageable with its acquisition of a new Ford Transit Wagon.

Greg Henington was a banker in his former life, but he’s been in love with the natural beauty and history surrounding Big Bend for more than 30 years. In 1986, he joined Mark Evans in a company called Texas River Expeditions as a sideline venture built around their shared passion for the area. “We both had corporate jobs, and we thought it would be fun to take people out for weekend escapes on the Rio Grande—more vacation for us than work,” he recalls.

By 1992, Greg was ready to leave corporate life behind, take control of the company and transform it into a full-time business. His wife, Valynda Henington, also left her banking job to join him, and the two put down roots in what they saw as “the last frontier” of Terlingua. Mark remains a co-owner and helps promote the company.

The venture has had its ups and downs since then, “good luck and bad,” as Greg puts it. Initially dependent solely on river excursions, the business was at the mercy of the Rio Grande’s water levels from year to year. They saw opportunity in that adversity, however, and began expanding into SUV and ATV tours, eventually adding the casitas and, most recently, a lodge and meeting hall.

“Our business really took off when we added lodging, and in 2001, we were able to buy out a competitor, Far Flung Adventures. We got a good deal and created the business as it exists today,” he says. The partners also had businesses in Colorado and New Mexico at that time, “but we shed them all to focus on being the very best here in Big Bend National Park,” he adds. “We are a one-stop shop for the outdoors.”

When visitors arrive at Far Flung Outdoor Center, one of the first things that greets them after sign-in is a transport vehicle. You never get a second chance to make a first impression, Greg believes, and the company’s new Ford Transit Wagon does a great job of that.

Ingot Silver with black accents and sporting the brightly colored company logo, Far Flung’s Transit Wagon is wrapped in windows that provide passengers with panoramic views of Big Bend’s dramatic scenery. It easily accommodates 15 passengers with plenty of room for their luggage, and the van’s high roof means no stooping down to reach their seats. “It’s very comfortable for our guests, and they really enjoy riding in it,” Greg reports, “and the rear doors open more than 180 degrees, making loading and unloading luggage a breeze.” 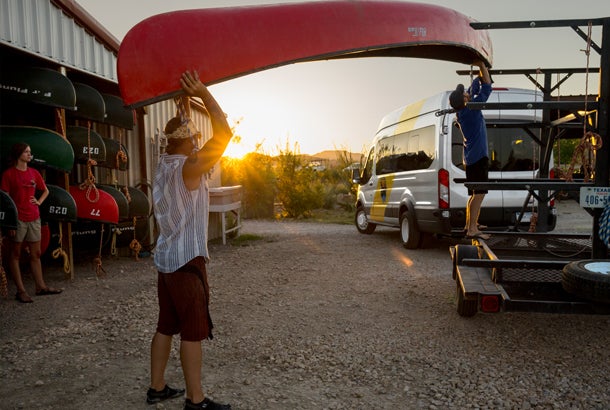 Excelling Where the Rubber Meets the Road

Appearance counts in the hospitality business, to be sure, but in an unforgiving environment such as Big Bend’s Chihuahuan Desert, ruggedness and reliability matter at least as much, and the Ford Transit 350 HD Wagon excels in that regard. With standard dual rear wheels, a powerful but quiet 3.2L Power Stroke® I-5 Turbo Diesel engine, AdvanceTrac® with RSC® (Roll Stability Control™) and the available Lane Keeping Alert with Driver Alert, Far Flung’s Ford Transit Wagon is more than a match for local dirt roads that are often muddy and rutted.

“That Power Stroke Turbo Diesel just powers up grades that can be as steep as 15 degrees in the park, even fully loaded and towing a trailerload of boats,” Greg says. “But the engine is so smooth and responsive, I’ve had more than one staffer ask if we were sure it’s a diesel the first time they drive it.”

Being that Far Flung is so far away from the nearest dealership, reliability is also a major consideration for the company. “We’ve always been Ford guys at Far Flung, and we’ve had a great experience with the other Fords in our fleet. The Transit Wagon is definitely living up to that reputation for reliability,” Greg adds.

For useful tips on how you can put a Ford Transit to work for your own business, and to learn how other small businesses are putting Ford Transit and Transit Connect Vans to work for them, go to http://www.ford.com/commercial-trucks/transitcommercial/. Plus, find other articles and infographics in this series to help you enhance your business—brought to you by the Ford Transit.