Liberty Tax | Brand Spotlight Partner What is this?

A Liberty Tax Opportunity Knocked and This Tax Preparer Answered

With support from Home Office and fellow franchisees, Shandreeka Blount's business has grown.

Last fall, the shopkeepers in the plaza with Shandreeka Blount were worried. There were several police cars outside her Liberty Tax office. They thought she may have had a break-in.

"It was kind of funny," Blount says. "There was nothing wrong. We were doing our annual Pancakes for Police breakfast, and we had a lot of takers. My fiancé makes pancakes that are amazing."

Word got around at the precinct, and the Liberty Tax office in Chesapeake, Va., had quite a crowd for breakfast.

That's one of the things about Liberty Tax that appealed to Blount. The company encourages franchisees to get out into their communities and be part of the neighborhoods where their offices are located.

Blount takes that role seriously. She serves as a judge for the local middle school talent show, and she brings food and drinks for high school students during their standardized testing week. She even cooks for her employees during the cold winter months of tax season.

"Brunswick stew. Chicken and dumplings. I'm a country girl," she says. "I like to cook."

She also likes being her own boss with Liberty Tax.

It's not a role she sought but, then, opportunity knocked. Blount had to answer.

Blount had been working at her local Liberty Tax office since 2012. She started as a tax preparer and quickly moved up to assistant manager.

"I was nervous," Blount says. "I was worried. I hadn't done anything like that before. I called the manager, and she said, "Calm down. You've got this."

The manager was right. Blount has a warm and bubbly personality. Her smile is wide and welcoming. As an enrolled agent, her level of tax knowledge is high.

Blount kept the office humming, and residents in the area knew and trusted her experience. She had so many clients at the end of one tax season that she had to bring in extra help.

In 2015, the store became available for a new franchisee. The Home Office gave Blount a call. Would she be interested in becoming a franchisee?

The thought hadn't crossed Blount's mind. She was happy with the work she was doing. She wanted to continue to work at the Chesapeake office, but becoming a franchisee?

Blount considered it. She met with people at the Home Office. She liked what she heard about the affordability of the business and the support she'd receive. She went to an information session and met franchisees. She liked what she heard even more, especially the best practices shared by successful franchisees. Blount was already familiar with the Liberty way, and she knew that the company delivered on tax support, technical support, marketing, and more. 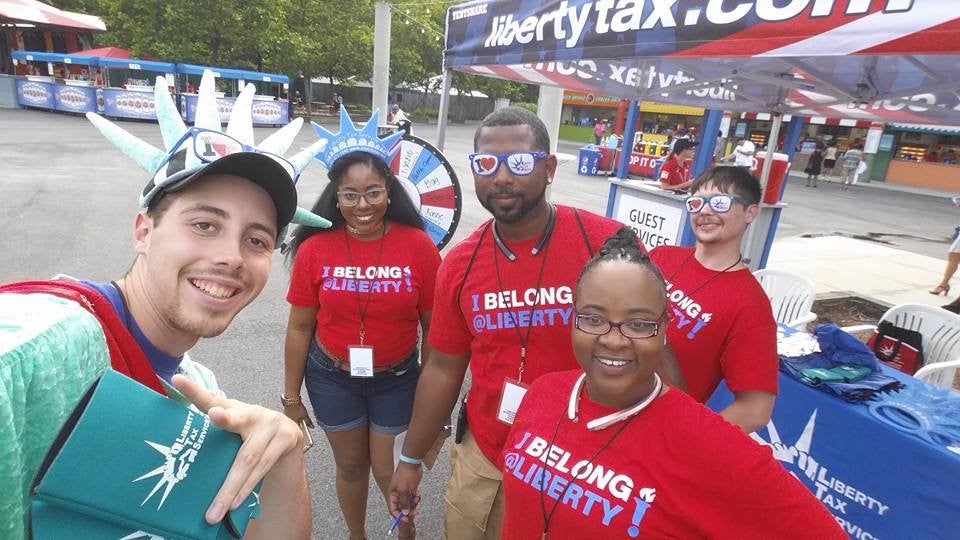 Shandreeka Blount, front, joins others in the Liberty Tax family as they get ready for a community event.
Image credit: Courtesy of Liberty Tax

It took a while for everything to sink in, but once Blount knew it was no longer a dream, she began working on her plan. She reached out to her Area Developer (AD) and got a listening ear and solid advice.

"I love our support system," she says. "They have everything I need. Everyone responds quickly. My AD calls and talks with me. He helps me. I'm all about innovation, and the company is, too. We've got new things happening that will allow me to help more people with their taxes."

Every year since she took over, her office has experienced growth, not only in customers. Shandreeka's children, now ages 21, 20 and 18, all help with the family business. They used to complain during tax season that mom was too busy. Then they realized how passionate she was about running her business, so they started coming to the office.

"You can't beat the flexibility.'

Now, they all work hard during tax season, but in the off-season, they do things they want to do. Blount is taking classes online. She also steals time for a vacation or two.

"You have time to go out and have fun," Blount says. "And you need that because tax season is demanding. We had people coming in with boxes of receipts in that last week of tax season. We were so busy."

Blount's office is not as busy in the summer, but tax reform has led to an increase in visitors already this year, she said. She welcomes them with open arms.

"I love helping people," she says. "I didn't think I would have this opportunity, and now I am so grateful to be here."