At Margaritas restaurants, every painting, tile, chair and artwork is direct from Mexico.

By Jason Daley
July 19, 2010
This story appears in the August 2010 issue of Entrepreneur. Subscribe » 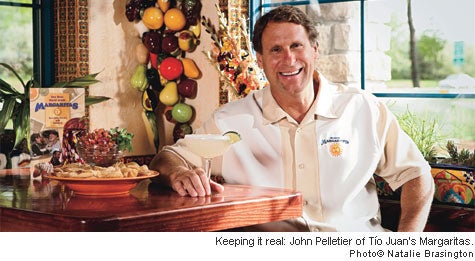 When John Pelletier opened his first Tío Juan's Margaritas restaurant in Concord, N.H., 25 years ago, he wanted to fill the place with real Mexican artwork, handmade furniture and décor. "Not mainstream pieces," he says.

So he and his brother rented a U-Haul trailer and drove from New England to Tonala, a Mexican port city in Jalisco known as an arts hub. They hit the mother lode, coming home with handmade sculptures, paintings, pots and more. The authentic décor became Margaritas' signature as the chain expanded, and none of the 21 restaurants is exactly alike.

Now, every time a new restaurant opens, Pelletier sends a 50-foot trailer to bring back everything from curtains and chairs to tables and hand-painted tiles. And every year he takes members of his staff to Jalisco to soak in the atmosphere. On the verge of opening his first franchises this year, Pelletier talks about how he'll reproduce his "direct from Mexico" philosophy.

Why franchise now?
We've been ready for a long time, but the market and economy have been a factor. Now we have a great franchise development team that's been successful before. And everyone else, from the heart of the kitchen to the executive level, is excited and rowing in the same direction.

Why not just order your d é cor online?
We don't buy old, traditional stuff. We respect tradition, but we're buying contemporary crafts. Over the years, we've tuned into the Mexican art scene. If something new is going on in Tonala, I know about it and it's on our next truck.

And the staff field trips?
Each year we take six to 20 staff and call it cultural education. We eat and drink and visit the artisans. If managers have been with us for more than a year, we usually bring them to Mexico. We've also taken key cooks, bartenders and support people. We visit our tile factory, our papier-mâché maker, eat street food, take a trip to Tequila. Along the way, they pick up the feeling of what Mexican hospitality is like. Mexico is very customer-centric. Light revolves around the customer. We want to bring that cultural magic back.

How authentic is your food?
We're not here to be called the most authentic restaurant--some of our restaurants seat 480 to 500 people. That's a tough sell as authentic, especially compared with a little place owned by a Mexican family. Pork carnitas, for example--in an authentic taquería, they boil the pork in lard. My customers will not tolerate pork cooked in lard. We think of our food as a remix of traditional and modern Mexican.

What's your favorite margarita?
The one we make with Herradura Anejo is rugged. It makes you feel like you're in Tequila. Give it a little floater on top, and now you're talking.