| Brand Spotlight Partner What is this?

Brought to you by Chevrolet

Recently, Chevy and Entrepreneur got together to give mobile entrepreneurs across a range of business types the opportunity to test the Chevy City Express LT in real-world conditions. The following is just one example of what these business owners experienced.

By the beginning of 2013, Edward Yu had decided that 20 years in corporate advertising was enough; it was time to pursue his entrepreneurial dreams and build his own business. After carefully researching his options, he decided to invest in a SpeedPro Imaging franchise. The company, which has about 127 units nationwide, is a large-format printer specializing in vehicle wraps, event marketing, trade show displays, wall murals, window graphics, and more. Kicking off his franchise that summer, Yu based his operation in Fountain Valley, California, and now handles a large Orange County territory.

Amplifying the brand of "Yu"

While Yu can point to an array of advantages the City Express offers his business, there is one that's closest to his heart (and mission): As a potential canvas, it's a logical extension of his brand. "This is an owner-operated franchise, so the owner is a key part of the brand," he says. "Having my name and the SpeedPro logo on the vehicle is my first calling card, and the City Express is the perfect van to amplify my message. It's got a large exterior size with flat surfaces, making it great for a wrap. We drive all over Orange County, and I want a vehicle that clearly carries my name and the SpeedPro logo--it's the best mobile advertising we could buy, and the City Express lends itself to the job quite well."

Yu adds that he spends a minimum of one to two hours per day making deliveries personally. "I want to meet with my clients one-on-one, shake their hands, and not be shy about asking for referrals. Having a professional-looking vehicle like the City Express wrapped with the SpeedPro logo adds credibility to my ask." 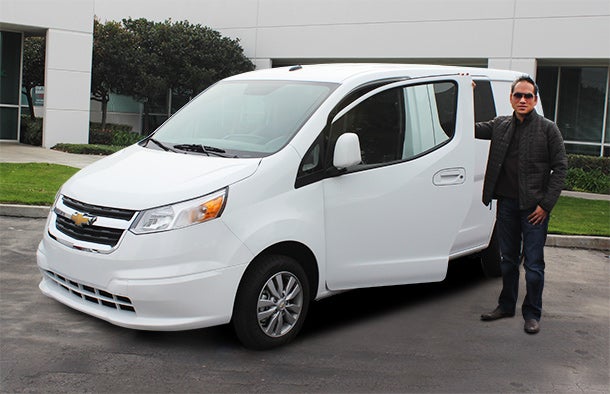 As a working vehicle, the one thing that set the City Express apart for Yu was its size.

"It's quite deceptive," he says. "It looks like a smaller van, but I was surprised at the amount of cargo it could carry. We move 10-foot by 10-foot pop-up tents, 30-foot banners, trade show displays, 4-foot by 8-foot posters, and more. The City Express can handle it all with ease. I've been using an SUV, but this has much more utility."

Beyond its big utility, Yu appreciates the ease with which City Express operates. "I've driven larger vans and found them to be ungainly and clumsy on the road--just too large to handle on city streets on a day-to-day basis," he notes. "For all the cargo I can get into it, the City Express feels more manageable than my SUV. It's nimble, quick, and gets better gas mileage, too. And, when you're spending time on the road, a comfortable cockpit with amenities like Bluetooth and back-up camera make life much easier. I just wish the City Express had been available when I started this business. It definitely works for my SpeedPro."

When you own a small business, the road to success can be challenging. But with a reliable partner like the Chevy City Express small cargo van, you can be on the go 24/7, tackling a wide range of tasks. Whatever the job requires, the City Express is built with the perfect form and functionality required to get your job done. With a range of conveniences including 122.7 cubic feet of cargo space, EPA-estimated 24 mpg city*, work-ready features, and a mobile office, the City Express is the small cargo van for businesses with everyday jobs. To learn more about how Chevy City Express can drive the success of your business, visit www.chevrolet.com/cityexpress.

*Cargo and load capacity limited by weight and distribution.