Kiva.org connects people making microloans to entrepreneurs around the world.

By Jennie Dorris
June 11, 2009
This story appears in the July 2009 issue of Entrepreneur. Subscribe » 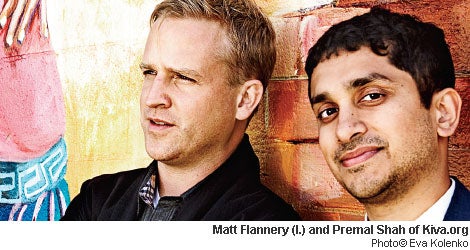 Three and a half years ago, Matt Flannery was in East Africa when he had a realization. "I had always thought Africa was bleak and oppressed," he says. "But it's a place that is uplifting, because the people are very entrepreneurial." Flannery came back to the States and started Kiva.org, a website that allows people to make microloans to entrepreneurs across the world--a unique blend of Facebook-like networking and angel investing. The website now raises $1 million a week, mostly from $25 loans. And potential lenders--who enjoy a 98 percent payback rate--have 150,000 entrepreneurs to choose from.

The company gained a reputation for facilitating U.S. lenders' support of global entrepreneurs, but the model will gain new footing in June, when Kiva adds U.S. entrepreneurs to its list of loan recipients. "It lets someone in India lend to someone in Louisiana," says Kiva president Premal Shah. "And I think U.S. lenders will be excited to help people in their own backyard." Here's how it all works.