Chris Anderson, who literally wrote the book on "free," faces off with the tech gurus who say "free" is the great sham of the digital age.

Turbulent times upend conventional thinking, and one of the most provocative ideas to surface in recent years is the doctrine of 'free'--the idea that giving your product away is the surest, and perhaps only, path to success. In a special feature, Chris Anderson, who literally wrote the book on 'Free,' faces off with the tech gurus behind 37Signals, who call 'free' the great sham of the digital age.

Free your mind
Don't be afraid to give your product away, Chris Anderson says, you'll figure out how to make money later 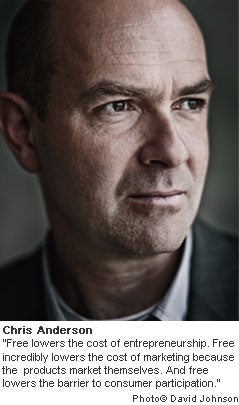 The secret to success in the digital age is giving people what they want--literally, says Chris Anderson, the editor of Wired and author of the controversial new book Free: The Future of a Radical Price. It's a matter of finding ways to make money around what you give away, he says, via a third party such as advertising or premium strategies. "It's the media model," Anderson notes. "Radio's free to air, television's free to air. Consumers get the content free and create a marketplace of attention, then producers sell that attention to advertisers."

Free is what the web has been about for a decade. Anderson says he's merely providing an economic model for why free works. He's stunned that his thesis has kicked up such a hornet's nest in the media, where the likes of Malcolm Gladwell in the New Yorker have ripped it (calling it unsupported by the facts and the product of a "technological utopian").

Anderson maintains that free is simply the best form of marketing: Customers sample the actual product, creating word of mouth, which allows companies to charge for premium versions of the product later. In other words, market free for a while, then attach the price tag.

Critics point out that Anderson's top examples--YouTube, Facebook and Twitter--have yet to make a dime. But Anderson cites a report that YouTube could be profitable this year and predicts Facebook could be next year.

He also admits there are limits to free; advertising can't support every business. But he's high on the "freemium" approach, using products as premiums for themselves (think Radiohead), and the fact that digital delivery costs are now next to nothing really drives the model.

Anderson has started two businesses based on free, and his book is available free in digital form on Kindle, and for a while free on audio, in addition to paid hardcover. He says 200,000 free downloads of the book (which was roundly criticized for plagiarism; a footnote transcription error, Anderson says) in two weeks prove the validity of pricelessness. "That's awareness, sampling, word of mouth." And a lot of nonroyalties. 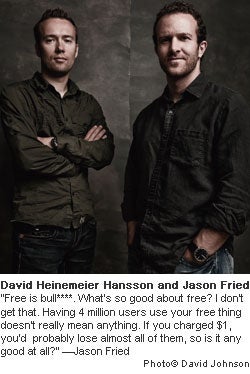 If you want to get Jason Fried riled, all you have to do is bring up the subject of giving your products away. Fried, the co-head of hot web application company 37signals, and his partner, David Heinemeier Hansson, detest free, a concept they see as little more than a sham, a sleight-of-hand that covers up the lack of a real product. If you want to make money, they say, you need a real product that customers will spend money on, a business basic that free web space has distorted.

"You pay for everything in your life except some of the stuff on the internet," Fried says. "That's the built-in human behavior we'd like to mimic. The problem with this free thing is, if you're going to hook people on free for four years, and all of a sudden start charging for things, that doesn't work very well."

Entrepreneurs are getting the wrong message from the Klondike buyout of YouTube and the "ridiculous" valuation of Facebook, they say, pointing out both companies are still hemorrhaging cash and haven't figured out a way to make money. Free is a bubble that will burst when investors run out of patience.

"I've been talking to startups, and people have this notion that all they need is eyeballs, all they need is a lot of users and then something magical will happen, and then they're going to be a huge success," says Heinemeier Hansson. "That's going to lead to a lot of unavoidable failures."

Fried, 35, and Heinemeier Hansson, 29, revel in exposing what they see as the entrepreneurial fables in the era of social media Kool-Aid. They've won a wide following for their ventings on their Signal vs. Noise blog, citing 100,000 daily visitors, and in a book about building software, Getting Real. Their themes--don't risk it all, stay small, charge for value, free is stupid--fly in the face of the conventional image that web success comes from big startups that attract massive amounts of free users and then massive buyouts--yet they're right in line with a time-honored business practice: making a profit.

"The answer," Fried says, "is to be fair on prices, deliver great services that your competitor can't and simply outlast free."