To save money, riders and drivers are looking for each other.

By Lindsay Holloway
March 17, 2009
This story appears in the April 2009 issue of Entrepreneur. Subscribe » 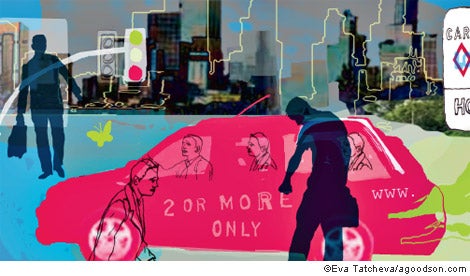 Whether carpooling to save money, the environment or commuting time, one thing is for sure: Packing in passengers is picking up speed. And as a direct result, the web is seeing a fast-growing number of carpool websites that match riders with drivers.

As a veteran entrepreneur in the carpool website scene, Steven Schoeffler has seen and felt the effects of the recent surge: "[2008] was a very different year for the carpooling world--for the whole transportation world." He admits it was a slow startup environment when he launched eRideShare.com in 1999, but interest in his site's free and paid services has picked up, bringing in 2008 sales of less than $100,000 for the company. Schoeffler, 46, offers free carpool matching to individuals and groups under 200. His fee-based service is a password-protected ride listing that matches employees and even keeps track of company mileage, fuel, emissions reductions and financial savings, like the reduced depreciation of the vehicle.

In the surplus of sites out there, each is forced to differentiate itself: Some focus on specific regions, some partner with complementary services and others implement web and mobile applications. Where Schoeffler is an industry pioneer, Zimride co-founders Logan Green and John Zimmer, both 25, pride themselves on their site's innovation. Using Google Maps, Facebook and a proprietary ride-matching algorithm, Zimride leverages communities to create the best travel options for the user. While that may sound uber-technical, Zimride does all the legwork and provides its riders with a user-friendly interface--something experts say is lacking in the market. "Craigslist gets 500,000 to 1 million ride posts every year," Zimmer says. "There's something to be said about its simplicity."

Most carpool websites offer their services for free with private enterprise solutions for a fee. Though startup is fairly simple and overhead is low, Schoeffler knew he needed the enterprise channel if he wanted to make a business out of carpooling. He has seen others struggle with market penetration and admits that carpooling isn't necessarily profitable for some right now. But Zimmer points out that the market is still relatively new: "The space needs some time to develop." With 2008 sales of about $150,000, his company's focus in the coming year is to expand its current user base of more than 300,000 and "prove to the investment community that this is a very large opportunity," he says. "We want to prove there's value in what we're doing."