Innovation for Things We Carry

How bondage and punk rock inspired a new way of accessorizing.

By Donnell Alexander
June 16, 2009
This story appears in the July 2009 issue of Entrepreneur. Subscribe » 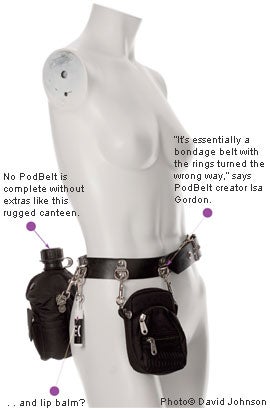 Isa Gordon's business started at a party--Burning Man, to be precise. When she first hit the weeklong desert arts festival and shindig, she realized she needed a device capable of carrying keys, sunscreen, water and other essential minutiae when bacchanalian winds blew her too far from camp. "I'd carried a purse the first year, and it was a pain," says Gordon, 39. "You could get a fanny pack, but they're pretty dorky. And even with that, everything gets bunched up."

When Gordon returned home, she reached out to a friend who had a side business making punk-rock belts. He whipped up something akin to an S&M collar: a rubber strap studded with bondage hooks. In prepping for her second Nevada journey, Gordon added metal clips, tethers and canvass pouches (or pods) to the belt. With her cell phone, flashlight, notepad, lip gloss, dust goggles and other Burning Man essentials in tow, she wore the new gizmo all week.

"The hips--especially women's--are made for carrying weight," she says. "The whole system was so useful that when I got back home, I never stopped using it."

SintheteX, Gordon's Los Angeles-based company, has sold about 1,500 belts on its website and has a following that includes stylists, key grips, campers and even housewives--­basically anyone in need of a free hand. "It's essentially a bondage belt with the rings turned the wrong way, and not everyone's going to like that," Gordon ­admits. "But people who need the PodBelt are evangelical about it."