My Sandbox is Bigger than Your Sandbox

And for $200, Ed Mumm will let you play with the heavy equipment. 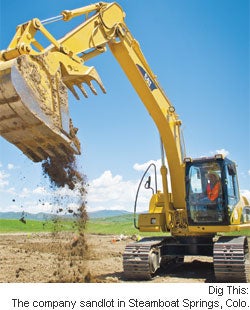 The Magic Kingdom. The Bellagio. The vacant lot outside of town where you can dig giant holes.

Ah, yes, Ed Mumm has big dreams for his company, Dig This. He foresees nothing less than America's next tourism hot spot, with bulldozers and steam shovels competing head-to-head with novelty attractions, amusement parks and Celine Dion as vacation musts.

Crazy? Mumm doesn't think so. In 2004, while building a home in Steamboat Springs, Colo., he rented a bulldozer and other heavy equipment to clear his land. "It was an extensive earth-moving operation and I had a friend who coached me," he says. "After a couple days I was having such a great time, I started to imagine how many people don't have the opportunity to use these machines."

That sparked the idea for Dig This. He leased five acres outside of Steamboat to serve as his sandbox, hunted around for insurance, rented half a dozen Caterpillars and in 2007 began marketing "heavy-equipment adventures" to tourists and corporate groups.

Don't laugh. Three years later, Mumm has 600 people a year paying $400 for a half day or $750 for a full day of trenching. There's also a $200 First Tracks program for one hour. He's preparing to franchise or license the Dig This concept around the country.This summer, he plans to open a location in Las Vegas. After that, he's eyeing Orlando, Fla.

Clients don't just push dirt around aimlessly--Dig This runs its sessions as mini-competitions, giving drivers tasks such as digging a straight trench, building a ramp (which they eventually drive over), or pushing a 2-ton boulder through cones. There's a 2-to-1 ratio of clients to instructors, and they're in constant radio contact. At the end of the session, "reclamation" activities reset the course for the next group.

"We've never had an accident or injury," Mumm says. "Operating this equipment is safer than riding a horse on a dude ranch. You can't fall out, and the machines are engineered so beautifully they're almost foolproof."

Mumm considers his years in Steamboat, which attracts 500,000 tourists a year, as a testing ground, and he hopes the company hits its stride in Las Vegas. "If I get a tenth of 1 percent of the city's 20 [million] or 30 million visitors," he says, "I'll be a very happy man."