This story appears in the July 2007 issue of Entrepreneur. Subscribe »

In the movie Say Anything, Lloyd Dobler proclaims that kickboxing is "the sport of the future." If Dobler had packaged kickboxing with wrestling, jiujitsu, boxing and judo, he would have been more accurate. The combination of these fighting disciplines has evolved into the sport of mixed martial arts, or MMA.

Most people recognize MMA by its brand name: Ultimate Fighting Championship. In addition to pay-per-view events, the UFC hosts live fights and a reality show on Spike TV. Over the past year alone, UFC shows on Spike regularly outdrew NBA games on network TV--and even bested a Major League Baseball playoff game.

In 2006, Wrestling Observer reported that the UFC raked in over $200 million in pay-per-view revenue--the most any promotion, including boxing, has ever grossed in a single year. 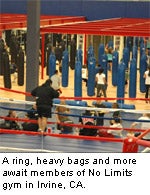 That's great news for people like Karen Santaniello and her husband, James. James was in construction and Karen in real estate when they jumped into the growing MMA mix. In 2004, James' construction company was about to tear down the studio where he trained in jiujitsu. The Brazilian jiujitsu instructor Juliano Prado, 34, and Colin Oyama, a 34-year-old MMA instructor at a neighboring gym, proposed a partnership with the Santaniellos to open a new facility. Within three months, the four partners opened No Limits, a 15,000-square-foot MMA gym in Irvine, California.

By the end of 2006, No Limits had outgrown its facility, moved to a 26,000-square-foot building and taken on another partner, Ben Kane. Today, No Limits has roughly 1,000 members, projects 2007 sales of $1.8 million and holds claim to the largest MMA facility in North America.

"We don't just stick [clients] on a treadmill," says Karen. "They are being taught by instructors who are very capable." Capable, indeed--their instructors have trained MMA stars Randy Couture, Dan Henderson and Tito Ortiz, as well as Olympic gold medal-winning wrestler Rulon Gardner. 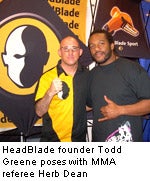 Even entrepreneurs without a direct MMA product or service are tapping the market. Todd Greene, founder of HeadBlade, a Culver City, California-based business that makes head-shaving razors and other head-care products, began advertising on UFC ring posts in 2004. At the time, his business was making less than $1 million. "I knew this was going to be a mainstream sport," says Greene, 40. Today, HeadBlade continues to advertise with the UFC and other MMA organizations and has seen revenue spike to almost $10 million.

The UFC is currently in negotiations with HBO. MMA--sport of the future? Even Lloyd Dobler would agree.