High-tech heavyweights may reign supreme, but some newbies have their eyes on the throne.
Next Article
Amanda C. Kooser
Magazine Contributor
February 7, 2008 2 min read

This story appears in the March 2008 issue of Entrepreneur. Subscribe »

Zannel Inc.
The company: Zannel's Instant Media Messaging platform lets users network from their phones with videos, pictures and text. It's positioned to take on textcentric social networking and micro-blogging leader Twitter.
The founders: CEO Adam Zbar, 38; CTO Braxton Woodham, 36; and vice president of technology Harry Evans, 32
The difference: Multimedia is key to Zannel's success. Its service takes advantage of the many mobile phones that now come with still and video cameras, can embed updates on Facebook and MySpace, and is now optimized for viewing on Apple's iPhone.
In their words: "The good news is that a number of the major challenges facing mobile social networking--such as mobile web adoption, carrier walled gardens, 3G network rollouts--are rapidly disappearing as the mobile ecosystem evolves," says Zbar. "The remaining challenge is to create a true mobile social networking experience that leverages a phone's unique capabil-ities vs. trying to duplicate the online experience."

Ning
The company: Ning takes a different approach than social networking leaders Facebook and MySpace by allowing users to create, customize and control their very own social networks.
The founders: CEO Gina Bianchini, 35, and CTO Marc Andreessen, 36, of Netscape fame
The difference: In February 2007, Ning debuted a spiced-up and spiffed-up service with a new level of user-friendliness. The ability to customize the social networking experience appeals to a wide range of users and many potential niche networks.
In their words: "We love MySpace and Facebook," says Bianchini. "They have been fantastic for bringing people into social networking. The difference with Ning is that instead of joining a large, one-size-fits-all social network, you're creating your own--with your choice of features, your own look and feel, your own members, your own brand. With Ning, it's yours." 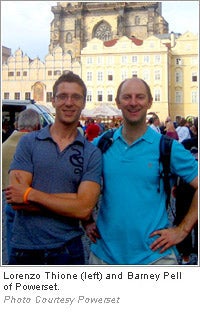 Powerset
The company: Powerset is developing a natural language search engine that will allow for more intuitive searching than current leaders like Google and Yahoo are capable of.
The founders: CTO Barney Pell, 40, and product architect Lorenzo Thione, 29
The difference: Natural language search will help Powerset push the boundaries of what search engines can do.
In their words: "Existing search engines treat a user query as a bunch of keywords and match these against the words in documents," says Pell. "Users have to translate their intentions into terms that work well for keyword search engines. Our approach will let users express queries more naturally, with less translation, and return results that better match user intent."