Long walks in high heels inspired two women to create something easier on the feet--with a little help from their university.
Next Article 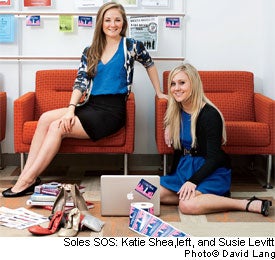 Wouldn't it be nice if your college helped your business make money? Susie Levitt and Katie Shea thought so, and during the course of their senior year at New York University, they enlisted the school's faculty, staff and even the PR department to help them launch a fashion company based on solving a single problem: Their feet hurt when they walked in high heels.

The two were working as summer interns on Wall Street and bonded over their complaints about covering the long blocks to and from work in heels.

"They were killing our feet, but we didn't want to give them up because we aren't the tallest people out there," says Levitt, 22. "So we came up with the idea of emergency footwear."

Back at NYU for their senior year, Levitt and Shea designed a stylish, foldable black ballet flat with a carrying case that could be tucked in a handbag and pulled out when their dogs started to howl. They gave the shoes a catchy name, CitiSoles, and a reasonable price, $24.99.

Levitt and Shea figured they had a potentially lucrative idea in hand, but they knew senior year was going to be busy. So in an act of self-preservation, Shea enrolled in a business-plan writing course.

"We were both involved in extracurricular activities," says Shea, 22. "The class really helped us stay on track."

The class also encouraged them to enter the Stern Business Plan Competition, which gave them even more access to advice from professors and advisors.

After completing the class and competition, Levitt and Shea had a solid business plan. But before they could begin selling, they needed to secure intellectual property rights. This time, they enrolled in a class about the patent process and worked with their professor to file an application.

"Schools often have lawyers who will come in and work with students pro bono," Levitt says. "We got free advice from lawyers who would have typically charged $500 to $700 an hour, all because we took the time to send an e-mail and ask."

Their company, FUNK-tional Enterprises LLC, was born June 1, when the first 1,000 pairs of CitiSoles arrived. Today, they sell two versions of the foldable flats: CitySlips (the original but in a variety of colors, $24.99) and AfterSoles (a simpler version of CitySlips, $12.99). The shoes are available in boutiques around the country, and on their website, CitiSoles.com.

With the help of NYU's marketing department, there was soon a story about CitiSoles in the New York Daily News, which led to more stories, including one in The New York Times. And Levitt and Shea were off and running.

Joel Holland, 24, is the founder and CEO of Footage Firm in Reston, Va. You can reach him at joel@joelkentholland.com.