Work Less (It's Good for Business)

Doctors told Brett Schklar to slow down--or else. That's when he started his own company and learned that paying more attention to life off the job made him much better on it.
Next Article Add to Queue
David Port
Magazine Contributor
Entrepreneur Contributor
November 16, 2009 10 min read 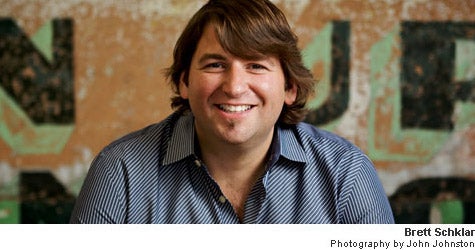 Brett Schklar was a fast-rising, burn-the-candle-at-both-ends kind of executive. So naturally, he was on a business trip the day of his 31st birthday.

His career as a vice president at a promising tech company was flourishing, and if that came at the expense of time with his family, time spent taking care of himself, time to even pause to celebrate his 31st, well, he was willing to make the sacrifice.

But something happened that day to make him question all that: He had a heart attack.

"Doctors told me I have a condition that needs monitoring, and that stress is a particularly important factor," he recalls. "I needed to work less and reprioritize. I had to change my lifestyle--diet, exercise, everything."

Suddenly, he had no choice: He eased off the accelerator both personally and professionally, focused more on his family and young son and cut back on the 80-hour workweeks, the constant travel and the late-night, bedside text messaging.

And he started his own business.

It was a move that almost sounded like a death wish. Entrepreneurs are notorious for working obsessively, and getting any startup off the ground requires a round-the-clock commitment. Or so the prevailing wisdom goes. But Schklar decided he was going to do things differently. In February 2006, just four months after he was rushed from his Seattle hotel room to a nearby hospital, he launched the Market Creation Group, a Denver-based business-to-business technology marketing firm, and he did it while working less. Today the business is thriving and growing, and Schklar is living proof that what the work/life experts tell us and what we never quite believe--that paying more attention to our lives outside of work makes us better workers--is actually true.

Some of the latest evidence comes from a study involving the Boston Consulting Group and the Harvard Business Review. During a four-year span, BCG consultants who took designated periods of time away from work--what the researchers call "predictable time off"--reported greater satisfaction with their jobs and their work/life balance than did colleagues who didn't take predictable time off. And in the end, according to the study's authors, the participating consulting teams delivered a better product to clients. Their conclusion: "New ways of working can be found that benefit not just individuals but the organization."

The approach is bearing fruit for Schklar: Revenue at Market Creation Group has increased 961 percent since 2006 and is projected to exceed $1.5 million in 2009. While most companies have retrenched or are struggling to maintain the status quo, Schklar's firm is expanding, with plans to open an office in Dallas before year's end.

Changed For Good
People who know Schklar are surprised by just how much the heart attack changed him.

"Here's a guy who was 'on' 24/7. Even after his heart attack, I was sure he would jump right back into that mind-set," says Nina Piccinini, a close friend and colleague of Schklar's and manager of communications for Verio, a Denver web hosting firm and MCG client. "But he made a decision to kick it down a notch, he stuck to it, and he's been very successful doing it his way. I have a great deal of respect for what he's been able to accomplish. It's inspiring."

Now 35, Schklar is hardly the distracted bundle of nervous energy one might expect to find running a marketing outfit that was recently named Denver's fastest-growing private company. He is the relaxed, focused and grounded eye at the center of a whirlwind success, a sharp, engaged conversationalist who seems comfortable in his own skin.

"There's a sense of calm about him now -- that nothing is going to rattle his cage," Piccinini observes. "I think he realizes his success is completely in his control."

In fact, things began to change for Schklar when he decided to take control of his life, starting with taking a hard look at himself.

"I realized the reason I had a lot of stress in the corporate environment is because I didn't fit in that environment," Schklar says. "I came to understand that my real passion is getting things done in ways that probably aren't always acceptable in a corporate setting, like saying what's on your mind, actually telling people when you think they're going about something the wrong way, and trying to help them find a better way to do it."

He decided that what's important in life and in business is as simple as figuring out what you love, and pursuing it: "The way to grow is to do what you love to do. Invest in it. Build it. Be willing to take risks. Keep ethics and the best interests of the people around you in mind. And don't always focus on the money."

The Humane Office
On a recent day, two receptionists greet visitors to the Market Creation Group offices. One rises from behind her desk and introduces herself as Shay, offering a handshake and bottled water. The other is Bear, a chocolate lab, who offers a sniff and the top of his head for a pat. 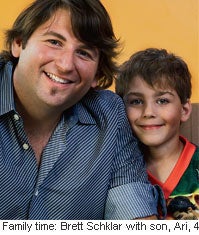 A pets-are-welcome policy is one way Schklar reinforces the importance of work/life balance at MCG. Having their hounds around, he says, lets people relax and bring a piece of home with them to the office. But Schklar also encourages his employees to bring a piece of the office home with them when the need arises; several members of the MCG team are telecommuters and all the firm's employees have the flexibility to work remotely.

"Other people work more, have fewer employees and take home a lot more money than I do," he acknowledges. "A few years ago, that might have been me. Not now. I still bust my ass and work long hours when I need to, but I'm not here sunup to sundown everyday. That, more than words, is what drives the culture here. I want people here to know they have freedom and flexibility, because I think it helps them work better."

Taking a cue from their boss, MCG employees are encouraged to carve out time for other pursuits, whether it's getting a lunchtime massage--membership at a local massage parlor is one of the fringe benefits of working there--or taking an afternoon off to be with family. "Everyone here works hard," he says. "But that doesn't mean work dominates our lives. The reward for doing our jobs well and delivering consistently great work to our clients is that we don't always have to be stressed about work. It's about maintaining what I call a 'quality balance.'"

Besides spending time with his son, Ari, Schklar finds that balance through being involved in the local arts district (MCG's offices are surrounded by galleries and filled with work by local artists), and serving as a fundraiser and speaker for the American Heart Association. "It's amazing," he says, "how many people who, after hearing my story, have gone and gotten a physical."

The businessman in Schklar attributes MCG's meteoric rise to starting with a clear vision of the niche the company would fill and how it would go about exploiting it. The niche revealed itself while Schklar was recuperating from his heart attack, during a brief stint as a marketing consultant.

"What I saw with B-to-B technology startups is that marketing typically is the last thing on their minds," he says. "They really need a rent-a-VP-of-marketing-type person."

So Schklar started touting himself as that person. Within a couple months, he had several new clients on retainer. MCG was born, with a reborn Schklar at the helm.

In plotting a course for the company, he wanted to build it around the concept of providing "virtual marketing executives" to help tech firms go to market. It wouldn't be a marketing consulting firm that "charges ungodly amounts of money" to startups that can't afford it, or a web design agency that thumbs its nose at "boring" B-to-B work.

Sticking to that vision helped MCG grow, even during the depths of a recession. Now the 10-employee firm has both startups and large corporations as part of its national client base.

"We understand the marketplace," Schklar says. "It's all we do and all we are passionate about. We know how to use e-marketing, social media, things like that, in a B-to-B context to help companies grow. People are dying for that kind of help."

Work Smarter, Not Longer
Brett Schklar built Market Creation Group into Denver's fastest-growing private company by working fewer hours and relying on shrewd planning and execution. Some of the keys:

. Make sure somebody needs what you are offering. Identify a niche--a void your company is uniquely positioned to fill--and exploit it.

. Define the types of clients you want. And avoid the ones you don't. They're not worth the trouble.

. Hire people to bolster your weaknesses. The goal is to build a balanced, highly capable staff.

. Plan, plan and plan some more. "It's about having a big, awesome long-term vision, plus a staged approach to growth," Schklar says.

. Make team members privy to your company strategy. "That gives everybody a compass," he explains, "and leaves less room for error."