Patagonia, From the Ground Up

While the rest of retail was tanking, Yvon Chouinard's outdoor clothing and gear company was having its best two years ever. Here's why.
Next Article Add to Queue

Yvon Chouinard has no problem being first.

At 26, he made the first ascent of Yosemite Valley's Muir Wall, a 2,900-foot rock face in California that took eight days to conquer with unsecured ropes and some hand-forged pitons. Three years later, on a journey by van and boat from California to the tip of South America, he rode breaks in Baja and the Pacific that had never been surfed before. When he took up kayaking, he claimed the first descent of Clarks Fork River in Yellowstone National Park, winding for miles through the 1,000-foot walls of Wyoming's Box Canyon.

Chouinard takes the same approach with Patagonia , the outdoor gear and clothing business he founded in 1974. The company turned direct-mail catalogs into good reading in the '70s, and last year, began releasing interactive and beautifully photographed online catalogs for its fishing and surf lines. Decades before businesses embraced the green movement, Patagonia spearheaded campaigns to use eco-friendly materials and fabrics in its clothing and pioneered sustainable manufacturing practices, turning the outerwear industry on its head.

The result? While most of the world was grappling with the Great Recession, Patagonia had its two best years ever. Sales at the 1,265-person company stood at $315 million in 2009, and Chouinard--still the sole owner--says they're still growing. This year they're expected to be near $340 million.

Patagonia gear isn't cheap or trendy (deliberately, anyway). Instead, the brand is thriving by maintaining its integrity, says Marshal Cohen, chief industry analyst with NPD Group, a market research firm. "They've become the Rolls-Royce of their product category," he says. "When people were stepping back, and the industry became copycat, Chouinard didn't sell out, lower prices and dilute the brand--because sometimes, the less you do, the more provocative and true of a leader you are." 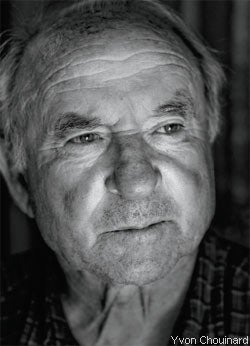 Patagonia headquarters, a rambling three-acre campus in Ventura, Calif., are within walking distance to the beach and employee perks include official "Let My People Go Surfing" flextime. At the center of the complex is the tin shed Chouinard rented in 1966 to house his original climbing-gear company, known today as Black Diamond Equipment. (He sold it to his employees in 1989, creating the industry's first employee-owned company in the process, but he maintains the shed as his private refuge/workshop.)

Patagonia will be rolling out its latest game-changer soon, by taking "cradle to cradle" responsibility for its products with its Common Threads Recycling Program . "It'll be in the front of the catalog, our promise that none of our stuff ever ends up in a landfill," Chouinard says. "We'll make sure of it with a liberal repair policy and by accepting old clothing for recycling. People will talk about it, and we'll gain business like crazy."

Entrepreneur caught up with Chouinard after his return from a two-week jaunt to Chile (far enough from the quake that he slept through it). Dressed in his typical flip-flops, jeans and checkered Patagonia flannel, he headed to an alcove adjacent to his office--an open room he shares with three other people, including CEO Casey Sheahan--to talk about how Patagonia found a remarkable new route to profitability, and climbed its way to the top.

Was Chile a business trip?
I was with my old climbing buddy Doug Tompkins and his wife, Kris [former Patagonia CEO], touring the future Patagonia National Park. We're buying up properties and putting them together in one big nature preserve at the southern end of the Chilean Andes. Then we're going to hand it over [to the Chilean government] after we finish building an infrastructure that will last a couple hundred years. When it's done, it's going to be 175,000 acres.

These types of things are actually why I have this company--to use the profits and take risks that public companies can't take.

Is that what drives you to be successful?
Yes. I want to send a message that it's good business to make a great product, and do it with the least amount of damage to the planet. If Patagonia wasn't profitable or successful, we'd be an environmental organization.

The recession didn't touch Patagonia. Why?
Well, I think the key to surviving a conservative economy is quality. The No. 1 reason is that in a recession, consumers stop being silly. Instead of buying fashion, they'll pay more for a multifunctional product that will last a long time. They'll buy one jacket from us that works for skiing and on top of a suit in a rainstorm.

Another reason is that we're out of debt. We can extend credit to our wholesale accounts that are hurting and can't get loans. These accounts are kicking out the little brands that they thought would be fun to put in in favor of the stuff they know will sell, from a company that will deliver.

Not many companies are debt-free.
It's something we worked hard for. In '89, '90, we were growing too quickly. Our bank was in trouble, we couldn't get loans, and it was a mess. I wanted to grow at a rate where I could eventually be free from the banks, even if I was holding growth back purposely. And that's what we did.

Did people think you were crazy?
Oh, yeah. They'd see all this money lying on the ground and go, "Why don't you pick it up?" But I believe there is a certain right size for every endeavor, whether it's a business or even a religion. You exceed that after awhile, and then you're no longer valid. I'm always questioning what the right size is for our company.

And what do you think?
Right now, we're too small. We're hardly a factor in Europe. We're tiny compared with what we could be, and we haven't paid any attention to Latin America. But there aren't many more wholesale accounts we could open up in the U.S. and Japan without going to the dark side.

The dark side?
We're maxed out. The people we want selling Patagonia already are. We could call Nordstrom tomorrow and sell them $20 million worth of clothes, but I don't want to do that.

What makes you proud?
1 percent for the Planet--it's the organization I started with [Blue Ribbon Flies founder] Craig Mathews. Businesses sign up to give 1 percent of their revenue to environmental causes, and we're adding more than a company a day. We have bigger companies like Clif Bar and New Belgium Brewing, but a lot of the members are small businesses, so it's pretty cool.

And when we discover we're doing something bad [such as using industrially grown cotton], we let other companies know that this is a bad practice. If companies like Nike or Gap ask us how to get organic T-shirt blanks, we can tell them a great mill. But we had to discover all this ourselves because none of that information was available before we started.

Right now, we're trying to convince zipper companies to make teeth out of polyester or nylon synths, which can be recycled infinitely. Then we can take a jacket and melt the whole thing down back to its original polymer to make more jackets.

How do you know if you're making the right move?
It's a lot of gut instinct. If you study something to death, if you wait for the customer to tell you what he wants, you're going to be too late, especially for an entrepreneurial company. That comes from Henry Ford: Customers didn't want a Model T, they wanted a faster horse.

And when you make mistakes?
We make mistakes all the time, but they're small mistakes. My way of learning anything--like kayaking or climbing--is that I immediately take a first step, and if it feels good, I take another one; if it feels bad, I step back. I'm not Evel Knievel. I make small bets that make it easier and safer later.

Like the new strategy about landfills?
Yes. In our catalogs, we're going to tell people not to over-consume. Buy what you need and hopefully it will be a Patagonia product. But if you're tired of it, we'll help you find another home for it by telling you where it can be sold on eBay or given away. It forces us to make products that don't wear out, but by taking this risk, it will make it easier to take business from our competitors in the end. No one will want to wear anything else.

So that's all there is to it? Stick to what feels right?
Well, you need to start out right. It's about hiring really smart and self-motivated people who want to work for you, and then leaving them alone. Young entrepreneurs should realize you can break the rules and still make it work--and work better. It's a real advantage to break the rules now, because business as usual doesn't apply anymore.

How do you get independent people going in the same direction?
Through consensus. You can't order them around, so don't even bother trying. When the surf comes in, all the surfers are out of here. But I've never seen an instance when anyone's taken advantage.

What's your main role?
I'm the company philosopher. I redirect things when I see opportunities. Sometimes I have to force it because it's not an entrepreneurial company anymore.

Like when?
We were traditionally an alpine company, so when I wanted to start our swim and surf lines, the whole company was trying to reject it. It took us years to inculcate our surf business. But customers do want bikinis with the Patagonia label, and we've expanded successfully into these different fields.

And we're very attractive to Gen Y and younger people because they have brains and are demanding products from responsible companies. They're concerned about the future of the planet.

Have you thought about teaching?
I was offered a fellowship at Yale to teach a class in business philosophy--with my high school education in auto mechanics .

So you didn't take it.
No. There's no surfing in New Haven. 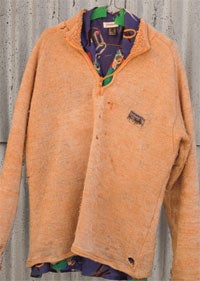 At Patagonia, reinvention happens on a regular basis. The company pioneered the use of environmentally friendly fibers including hemp, recycled nylon and chlorine-free wool; invented "Gladiodor," an odor-control fabric treatment derived from crab shells; and shook up a previously drab outerwear industry with its brightly colored product line. And there's more. Here's a quick timeline of some other firsts.

1977
Patagonia comes out with its signature Pile Fleece jacket. You know the look--every outdoor clothing brand now carries a version of it.

1980
The company introduces the idea of layering outerwear and begins using water-repellent polypropylene base layers.

1985
Pile Fleece is updated with Synchilla, a material made of recycled plastic soda bottles and polyester. Base layers are replaced with Capilene, a recycled--and recyclable--moisture-wicking polyester fabric.

1996
After the company realizes the environmental damage caused by the industrial cotton industry, it converts its sportswear line into 100 percent organic cotton. Still noteworthy--but revolutionary 14 years ago.

2010
Common Threads Recycling Program now includes a pledge to keep all Patagonia products out of landfills.