More Than What You Paid For

Hire your smartest classmates by setting up an internship program.
Next Article Add to Queue 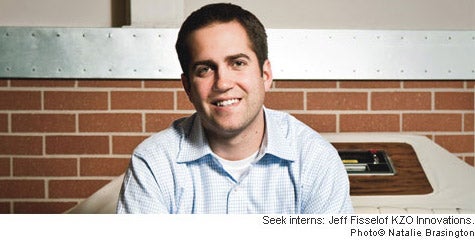 Recruiting top talent on a tight budget is a problem every entrepreneur faces, and Jeff Fissel was no exception.

But during his senior year at George Mason University in Fairfax, Va., when he was trying to get his software company off the ground, he came up with a smart move: Create an accredited internship program that would allow students to work for him in exchange for college credit, the chance to travel and meet high-profile clients and a strong letter of recommendation.

"We were able to start a pretty robust internship program that offered some good experience and a great rï¿½sumï¿½ item," says Fissel, 26. "The interns were happy, and we were relieved to have a solid work force."

Fissel and his co-founder, Wes Cruver, officially formed KZO Innovations in 2007. At a previous job, the two had produced corporate training videos--frustrating work because the videos became outdated almost the moment they were finished. The idea for KZO was to transform the training video into an interactive form, a Wikipedia-like tool that could continually be updated.

Using KZO's platform, a company can produce a video with an unlimited lifespan by allowing viewers to comment, add tags, ask questions and insert URLs at specific points within the video. Then it is stored for the next person to view and build upon.

Fissel had recruited from campus during the company's initial stages, but it wasn't until after he graduated that he realized the full potential of the student work force. "I was invited to speak at a class, and after my presentation, I had students ask if they could come help out," he says. "They even offered their services for free."

A professor introduced him to the school's career services office, where Fissel registered KZO as an approved internship program. The process involved filing paperwork with basic company information and describing the type of work interns would do. Though the students officially worked for no pay, Fissel motivated them by giving small stipends for various projects.

"We were a small startup company, so the school was worried that we might not provide a legitimate internship experience," Fissel says. "Having a reference from a professor that respected what we were doing made all the difference."

Of course, interns can also grow into great employees, and today several of KZO's 20 full-time employees came from its internship program. "It is a very cost-effective way to train people and groom them," he says.

Thanks in part to its internship program, Fissel says KZO has grown quickly and now has a client list that includes Cisco Systems, AstraZeneca and the U.S. Department of Homeland Security.