Touch-based technology isn't just for the iPhone and iPad.
Next Article 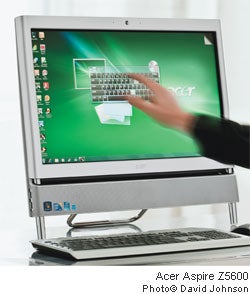 Apple's iPhone and iPad are not the only things that work with a touch of the finger. Touch-based technology is finding its way into everything from laptops to printers to once-forgettable desktop PCs--some of which fill critical niches for the smaller enterprise.

The unit packs a hefty 2.33GHz processor, as much as 8GB of RAM and a full terabyte (1000GB) of storage in a single silver enclosure. Reminiscent of the Apple iMac in appearance, the Aspire Z5600's functions can be operated with either a traditional keyboard and mouse or your--or your customer's--fingers.

That opens the box to myriad business possibilities: For example, the PC, which retails for $999, could be set up as a low-cost informational kiosk in retail shops or offices. John Karabian, a product manager at Acer, said touch-enabled desktops are being used as data entry points where customers can order food or view high-end cosmetics options at a retail store.

And for all of its marketing prowess, Apple is far from being today's top end of touch: Windows 7 has touch technology built into its core operating system, and third-party software vendors are lining up to offer value-added tools for touch.

"The iPad and Apple are only the beginning," says Francois Jenneau, sales and business development director for Stantum, a European multitouch display application developer. "Customers now want to touch their data. There is no going back."

We Need to Reimagine a More Family-Friendly Workplace