Risk it When You're Young

Why you shouldn't wait to start your business: You may never get back to it.
Next Article 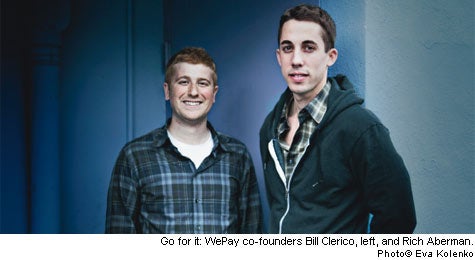 Rich Aberman and Bill Clerico faced a tough decision as they approached the end of their senior year at Boston College. Start an innovative online-payment processing business, or start a new job and grad school?

In the end, they decided to go the safe route--Aberman set out for law school at New York University and Clerico took a job as an investment banker at Jefferies--and they promised themselves that, one day soon, they'd get back to starting their business. But all too quickly, they saw themselves getting sucked into the workaday world and their entrepreneurial ambitions slipping away.

"It only gets harder to start a company as time goes on," says Aberman, 25. "As you get used to a salary, you start getting comfortable with a certain lifestyle, which becomes hard to leave for the uncertainly of being an entrepreneur."

Clerico was worried that if he tried starting a company and failed, he would be six months out of school with no relevant job experience or tangible success. "In hindsight, I think that was a dumb fear," says Clerico, 24. "You can always go get an entry-level job."

So after just a few months, they changed course: Aberman left law school and Clerico quit his job, and they founded WePay , an online system for groups to manage their funds. They scraped by on income from odd jobs--Aberman taught LSAT courses while Clerico did technology consulting--as they worked to get their business off the ground.

"We just kind of did what we had to do to make rent every month," Aberman says. "And it's completely doable, too. There's the fear of not having any money, but in actuality, you can usually find a way to scrape up six or seven hundred bucks to make your rent payment."

The decision paid off, and a little over a year after founding the company, Aberman and Clerico have raised nearly $2 million for WePay from high-profile Internet investors such as Max Levchin, Eric Dunn and Ron Conway.

WePay launched its service March 30, allowing individuals and groups all over the world to establish an account and collect money in a variety of ways--from paper checks to credit cards--and then use a debit card to spend the money in the account. They already have several thousand users, ranging from sports teams to fraternities to groups of roommates managing rent and utilities. WePay collects transaction fees ranging from 50 cents for bank account payments to 3.5 percent of credit-card payments for each payment received; outgoing transactions are free.

Aberman and Clerico were able to get their college business idea back on track after a minor detour, but they strongly recommend starting right out of college.

"You have the degree under your belt, and you haven't tied yourself into a particular lifestyle or career path," Aberman says. "If you take a risk, and it fails, the worst that happens is that you have a unique experience that you can use as an impressive factor to get you into graduate school or to rock a job interview."

Adds Clerico, "If you wait until you work for a few years or go to graduate school, you are just piling on reasons not to take the risk, and you reduce the chances that you ever will."

Joel Holland, 25, is the founder and CEO of Footage Firm in Reston, Va. He can be reached at joel@joelkentholland.com .