On this Curriculum: The Future

Singularity University may be the most ambitious and utterly idiosyncratic entrepreneurship program in the country. Just ask the BrinBot.
Next Article Add to Queue

Bioreactors for terraforming. An orbiting data center. The 23 students on the Space Team are brainstorming business ideas. The doors are flung open to let in the summer breeze, and a few people have kicked off their shoes. Laptops are abandoned on the tables, and everyone is huddled around the Post-it notes spread out on the carpet. Two stick-figure drawings of a rocket being launched into space have been pinned to the back wall.

The discussion goes a little like this: "We should figure out a way to capture and beam solar energy," one student says. Another counters: "But we need a more efficient way to get into space--why not do alternative launch technologies?" And a third: "What about looking into the implications of microgravity on cancer treatment?" 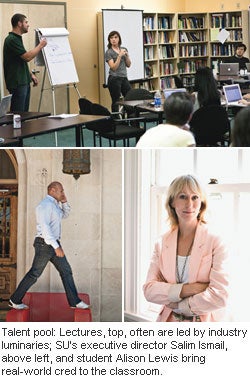 Welcome to the summer Graduate Studies Program at Singularity University, perhaps the most ambitious and utterly idiosyncratic entrepreneurship program in the country. Launched in February 2009 by Peter Diamandis, founder of the X Prize Foundation, and futurist Ray Kurzweil, the nonprofit educational institution with a bare-bones "campus" on the NASA Ames Research Park in Mountain View, Calif., is quickly gaining mystique as a futurist boot camp. In this session, only its second, 1,600 applicants from around the world vied for just 80 spaces. Never mind that SU is still in something like startup mode itself. (Executive director Salim Ismail, a former Yahoo! VP, says the staff used PC boxes as desks the first year.)

The school takes its name from Kurzweil's popularization of the controversial "singularity" theory, the idea that in the near future (say, 2045), exponential advancements in genetics, nanotechnology, robotics and artificial intelligence will allow humans to live forever, through a merging of biology and technology.

But to be clear, this isn't the prologue to Ghost in the Shell. "It's not like we just sit around and talk about radical life extensions or reverse engineering the brain," Kurzweil says. "The focus is on the here and now." SU's philosophy is rooted in what he calls the law of accelerating returns, which describes how the world is changing at an exponential rate--think of the Internet, or how computers are "a million times" cheaper than they were just a few decades ago. "We're creating a community that understands the implications of this pace of progress," he says. "We want these students to address existing problems with the power of this technology and to consider the philosophical, legal and social problems that will emerge."

Students shuffle between three buildings on the sleepy, 213-acre campus, just a few miles from Stanford University and Google headquarters. The administration draws on the Silicon Valley's VIPs as faculty and guest speakers and takes students on site visits to the places everyone's buzzing about now, like AutoDesk and 23andMe. Google co-founder Larry Page is a founding investor, and lecturers include mobile phone inventor Martin Cooper, astronaut-engineer Dan Barry and Vint Cerf, widely considered the father of the Internet.

On this particular day, an afternoon lecture wraps up with Philip Low, a pioneer in computational biometrics, fitting a student volunteer with the iBrain, a wireless iPod-like device he developed to monitor brain activity at home. He tells students it can also detect genetic similarities using collected sleep data--and someday he expects an upgraded version could be deployed as a defense against bioterrorism. The student, Julielynn Wong, sits patiently with the headgear while everyone crowds in for a look at her brainwaves.

The Student Body
The schedule is brutal: Days start at 9 a.m. and the formal program goes well past 10 at night, not counting all the informal gatherings afterward. More than one student compares it to an extended TED conference, where the world's great thinkers gather to present their most innovative ideas. The experience doesn't come cheap, either. Tuition for the 10-week SU Graduate Studies Program is $25,000, though many students receive sponsorships and some form of financial aid. According to Ismail, the real profit stream is the university's Executive Program, which offers wealthier, tech-minded individuals a condensed version for about $15,000.

So what does all that money buy? 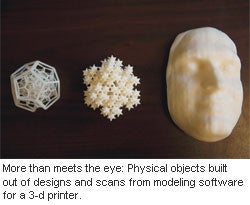 Well, there's the workshop equipped with a MakerBot 3-D printer, which uses modeling software to build physical objects out of any design or scan. And there are plenty of robots, including the BrinBot, a remote telepresence robot that Google's other founder, Sergey Brin, used earlier this year to interact with participants in the Executive Program. And SU is the kind of place where you get the chance to try on the iBrain and ask inventor Dean Kamen exactly how he came up with the Segway.But the heart of the program is the team project, which begins in earnest during the fourth week. Students choose one of five "grand challenges"--large-scale food production, sustainable water, space exploration, upcycling or home energy use--develop a technological solution and then come up with a business plan that can be scaled to affect 1 billion people over the next decade (a goal casually referred to as "10 to the nine-plus").

"We want students to think big, but do so realistically," Diamandis says. That's why the curriculum focuses on solutions for developing countries and emerging markets--where the greatest untapped opportunities exist.

"The point is not to just have a good idea. It's to really launch a project," Kurzweil adds, noting that SU is providing opportunities for teams to receive capital from companies like ePlanet Ventures. They also get to pitch a crowd of investors during their final presentations.

As director of the Innovation Center at Un Techo para Chile, an NGO that invents products such as silicon mobile showers to improve the lives of impoverished Chileans, Julian Ugarte knows how crucial business strategy is in turning ideas into reality. "There's obviously more water than soda in the world, but it's easier to find Coca-Cola than fresh water in slums," he says, "so if the Valley gets excited, the talent and resources here can make a real difference in the developing world."

SU students leave with more than an investor-ready business plan and a certificate with their name on it: They have the ability to draw on an all-star network to get results, now and down the line. Ugarte likens the experience to being on the TV show Lost: "I feel like we are on that island. Everyone comes here with their own skills and experiences, and we're asked to solve these big problems."

Adds Daniel Burrus, founder of Burrus Research Associates and a futurist who forecasts the effect of technology on business: "Whenever you assemble good people, interesting things are going to happen." What SU needs most to establish itself, he says, are concrete innovations and successful businesses--which, hopefully, will come in a few years--and an unwavering commitment to its philanthropically minded mission statement. "If they can really address humanity's grand challenges with the businesses they create, SU will be unique among all the incubators, think tanks and research universities out there."

On the Launchpad
In fact, all of the inaugural projects from last year are now startups. Shawna Pandya took a year off from medical school to get CiviGuard off the ground with two fellow SU alumni; the company, which uses mobile phone technology to manage disaster response, already has clients and is negotiating with government organizations and corporations. Devin Fidler, who founded a think tank before arriving at SU in the summer of 2009, is raising funds for a startup that will use computerized cranes to build affordable houses in developing countries. Jessica Scorpio, a former political aide, co-founded Getaround, the world's first person-to-person car-sharing community.

Not bad for one summer. 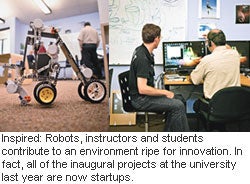 One of the biggest criticisms about SU's curriculum is that 10 weeks isn't enough time for individuals to create real value in fields they're unpracticed in--and using technology that's still fairly raw. But Diamandis says this is precisely why the model works: "The key to coming up with a game-changing innovation is to fail early and fail often." Breakthroughs happen at the intersections of different fields, and where business, government, academia and philanthropy meet--the place to find what Ismail calls "the primordial ooze of innovation."

In this enclave, nothing seems impossible, and that spirit is evident when you drop in on the farming group. Students are trying to decide between aeroponics (growing plants in air or mist) and hydroponics (growing them in nutrient solutions). It takes about 30 seconds for them to come to a unanimous decision: "Both, because you never know."

And investors are intrigued. Associate founder Rob Nail, an alumnus of the Executive Program and founder of Velocity11, a lab robotics company worth more than $20 million when it was acquired by Agilent Technologies in 2007, says people are asking for an incubator. He's working on it. "A ton of ideas emerge from the students--about 3,000 that first year," he says. "Personally, I'm always looking for good ventures to get involved in, and I'd love to capture some of those ideas and spin them off. Who knows what will come out of this?"

For now, though, this is what the future looks like: Jack Hidary, a tech entrepreneur turned clean-energy philanthropist, finishes his presentation and breaks the students up for a small-group exercise: "I want you to come up with a viable business plan for using one terawatt of power," he says. (A terawatt is a trillion watts of power--an important thing to think about if humans ever create a way to store unused electricity.)
He gives them eight minutes.