What can social media do for an old-school business? Follow Big Papa and find out.
Next Article

Social media is no flash-in-the-pan marketing trend--Facebook, Twitter and the like have the potential to amp up branding and drive demand like nothing before them. A study from Knowledge Networks and MediaPost Communications last November shows that these tools are as effective as TV for getting the word out for advertisers. So Entrepreneur put social media's marketing prowess to the test with an experiment that would measure exactly how much social media can help a business grow. Our subject? Big Papa's BBQ, a Denver-based restaurant chain and social media newbie. With the help of a team of creative thinkers and experts in branding and digital marketing, we set out to take Big Papa's from social media zero to social media hero--in 60 days.

The Business
Big Papa's is a fast-casual restaurant founded in 2003 by Bill Cossoff, a serial entrepreneur and former commercial real-estate broker, and Frank Alfonso, a corporate restaurant manager for 25 years. It has two other locations--in Littleton, Colo. (one of which is a sit-down restaurant)--and it runs a catering business and employs 60 people total. Big Papa's notched $2.1 million in revenue in 2010. It's never spent more than $40,000 a year on advertising, and it had no social media presence.

The Challenge
The goal was simple: Give Big Papa's a marketing makeover. But the stakes were high: We aimed to boost revenues by at least 50 percent. Our team, led by LeeReedy/Xylem Digital of Denver, came up with four steps to maximize followers and create a community of loyal (read: returning) customers.

For the first 30 days, LeeReedy/Xylem Digital took the lead in pushing promotions on Twitter and Facebook. At the halfway point, they handed the reins to Big Papa's and watched as the restaurant owners went social on their own.

The Results
Heading into the effort, Cossoff and Alfonso wanted to get existing customers to buy more ribs, to recruit and inspire new fans and to shore up their brand as the best barbecue joint in Denver--all without breaking the bank. Did they succeed? Smoking ribs takes time, so in the spirit of true barbecue, you'll have to wait until our April issue to see how Big Papa's fared. 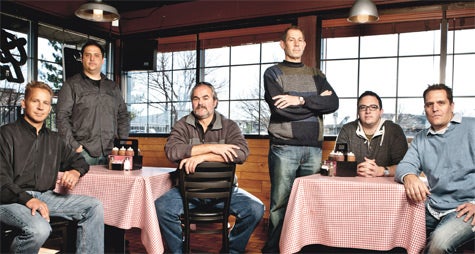 This co-founder of Big Papa's BBQ restaurants is "Big Papa" in every sense of the word. He's big. He's a papa (with a son and a daughter). And he knows his barbecue. Alfonso's first job in the business--slinging ribs, of course--was while he was an undergrad at the University of Florida about 30 years ago. Since then, Alfonso has perfected his sauces and managed nearly a dozen restaurants.

The quieter, more cerebral half of the Big Papa's founding duo focuses on the business side of restaurant operations. In addition to a career in commercial real estate (and a few years as a ballet dancer), Cossoff has spent two decades as an entrepreneur--most recently helping to launch the Newton Running Co. brand.

Gilbert, digital creative director at LeeReedy/Xylem Digital, is the brains behind the print and digital artwork in Big Papa's social media campaign. If some of the images look hand-drawn, it's because they are. Gilbert embraces technology, but he's a huge fan of creating art in traditional ways.

Consider Reedy the voice of the social networking challenge. As strategist and copywriter for LeeReedy/Xylem Digital, he pens the almost-daily blog, as well as all marketing materials. Reedy also masterminded some of the pop-up events (the rib-away at the University of Denver hockey game was his idea).

As a principal and chief strategy officer for LeeReedy/Xylem Digital, Snyder was the first to suggest Big Papa's as the subject for our social media makeover. Since then, he's worked with Cossoff and Alfonso every step of the way, setting expectations and keeping them engaged.

For the first half of the challenge, every tweet and status update from Big Papa's was written by Williams, a producer and social strategist on the LeeReedy/Xylem Digital team. He's also a barbecue junkie; Alfonso and Cossoff have considered naming their next sauce after him.