Why Mobile-Friendly Websites Are Critical to Your Strategy

To land the big fishes, you need to be able to find them. But like the fishes themselves, data about where and when the big ones are biting don't stay fresh for long.

The 100,000 or so user forum members of Bigfishtackle.com like to share just that kind of information, but by the time they get back home or to their Wi-Fi enabled cabins to log on to tell their friends the best places to drop a line (or maybe just to gloat), it could be old news. It would be a lot better if they could log onto their mobile phones the instant they set the hook, right from the boat.

"Fishing reports can get a little dated," says Mike Hodgdon, COO of Colorado Springs, Colo.-based First Light Net, which runs Bigfishtackle.com and other websites for outdoor enthusiasts. "There is a big advantage for the angler to do this while they're actually on a fishing spot. That's why we started to see some demand to post to the forum from mobile phones."

The website became an early adopter of new technology enabling a mobile-optimized web browsing experience. In 2007, it started reformatting its site for smaller mobile device screens. But the business soon found dotMobi, a Dublin, Ireland, firm that's among a handful of companies that sells .mobi domain names, as well as tools for creating a mobile-optimized web experience. Now, Bigfishtackle.mobi gives forum members viewing, browsing and posting functions that are just like the desktop web experience, but rendered just right for a 3- or 4-inch mobile phone screen.

The site and others like it represent a growing trend among entrepreneurial businesses to achieve a more mobile-friendly web presence.

The .mobi designation isn't for a separate website--it's just a mobile-optimized extension. Bigfishtackle.com didn't have to change its URL. "You can post to the .mobi site, and it integrates with the regular website in real time," Hodgdon says.

Pinky Brand, director of global sales at dotMobi, estimates that businesses could realize a bump in traffic of 10 percent to 15 percent by mobile-optimizing their websites. That could be the amount of traffic they are losing if customers try to visit their regular websites from mobile phones and find them unfit for viewing on their device screens.

"Mobile is what a lot of consumers use to look for businesses right now," Brand says. "In truth, every business already has a mobile website because your website can be seen on mobile phones. It's just that the businesses may not know how bad it looks on a mobile phone."

Bigfishtackle.mobi was among the first sites launched with dotMobi's help. Though the site does see some unique visitors, Hodgdon says the crossover from the regular website has been especially notable, with about 40 percent of website visitors crossing over to the mobile-optimized version. That's a lot of impact for a project that cost its website proprietor little more than $8,000. 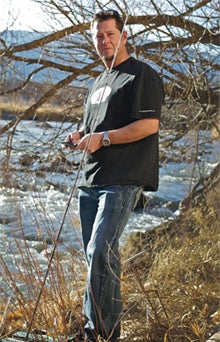 "If you think about it, this makes sense for a lot of different types of businesses because the mobile phone market is so big," Hodgdon says. "The opportunity is bigger than just building for computers."

The nascent mobile website movement could be the next step for mobile-savvy businesses that have joined the mobile app explosion, or even for those who have missed out on apps. However, in the long run mobile websites could prove to have broader implications and greater business benefits.

It can be expensive and labor intensive to develop a mobile app to represent your business. Developers of the earliest mobile data apps often had to write different versions for every mobile device on which they wanted the apps to play, says Mitch Lazar, CEO of Taptu, a social media and technology company with headquarters in Denver and Cambridge, England.

Lazar himself was an early entrant into mobile Internet endeavors, having created the CNN Mobile service after starting CNN.com in the 1990s.

"There were huge cost and distribution challenges because you had to customize the service for every phone that was out there," Lazar says. "We had to create about 500 different SKUs for CNN Mobile for different distributors."

A pair of philosophically opposite technology evolutions in recent years made the development process easier. First, Apple created its own tightly controlled app ecosystem with the highly desirable iPhone at the center of it. Next, the emergence of the Android operating system created an open environment for developers to create an app once, and with a few tweaks, get it on a much broader list of devices.

The success of the iPhone and the rise of the Android army created a fast-growing market for mobile apps, but with that success came new challenges for any business seeking to make its mark with its own mobile app. For starters, it has to deal with an app store, such as Apple's iPhone store, that will want a piece of the revenue. Also, the app undergoes lengthy, rigorous testing and certification procedures before it gets a spot on the virtual store shelf.

But the biggest challenge may be getting the app noticed once it does become available. At the Apple store, for example, an app now has to fight for attention against more than 300,000 others--and that's just one app store. And if consumers do find it, will they use it? As mobile phone users download an increasing number of apps, concerns are growing about the potential for app overload.

"It's filter failure, the problem of not being able to filter out what's core to you," Taptu's Lazar says. "It's a problem that has spanned years as we've had an Internet fire hose pointing at us."

Taptu's MyTaptu social news aggregation app allows users to build a personalized visual experience on the mobile phone that lets them avoid "app-hopping," Lazar says. That could make it easier for individual business apps to be found in the rapidly growing mobile app universe.

Though tools like Taptu help, many small-business owners believe that the mobile app environment still can be an abyss, and that they could better use their time and money enhancing their core websites, rather than trying to get a homespun app onto their customers' phones.

"You've got better devices, better networks and better browsers," he says. Yet how and when to pursue the mobile web remains a challenge.

Where to Go for More Resources to help you mobilize your web presence
dotMobi: Resources and information on buying a .mobi domain.

mobiThinking: A spinoff of dotMobi that offers education about mobile web marketing.

HTML5.org: More details on HTML 5 and comparisons to previous versions.

"There's a great deal of confusion about the mobile web," says Joshua Bixby, president of website optimization firm Strangeloop, in Vancouver, B.C. "Businesses haven't known what to do about it, and the largest companies have been focused on coming out with their own apps for individual phones.

"What's getting the mobile web more attention is executives checking out their competitors' websites from their iPhones and finding out [those sites] work better on mobile than their own," Bixby says. "Then they force their IT departments to change direction and prioritize the mobile web."

DotMobi's Brand says businesses should keep in mind three factors when developing a mobile website: the site needs to be able to detect when mobile users are accessing it; it needs a way to adapt content to a mobile format; and it needs a way to present that mobile-ready content.

One of the main technology tools is HTML 5, the first version of the well-known Internet development language to accommodate mobile. It allows the creation of mobile-optimized websites, as well as "web apps"--essentially website-based apps and widgets that can be accessed through a web browser such as Google Chrome or Apple Safari that uses the Webkit open source web page rendering system that is part of the HTML 5 standard.

"Web apps are basically HTML wrapped in an app," says Mark Britten, senior product manager of NewBay Software, which has offices in Seattle and Dublin. "It is something that is much more lightweight and much quicker to use than XML."

But the best part for small businesses that lack an IT department is that no knowledge of HTML 5 is required. Solutions such as dotMobi's goMobi service platform can do the grunt work for you. With goMobi, business owners use simple drag-and-drop methods to turn their desktop site into a mobile one. And, Brand says, the conversion process takes just minutes. With dotMobi's free mobiReady.com service, owners can test their existing site to see how it will look from the perspective of different devices.

Many Advocates of HTML
5 argue that mobile-optimized websites and emerging web apps based on the platform can help businesses avoid the mobile app store glut by sending users right to their websites--which, in turn, can help dig users out of the piles of mobile apps that may be suffocating their overall mobile Internet usage.

"Mobile apps actually have a high churn rate. All of these apps you have downloaded are digital weight you carry around," says Skyfire's Bhandari. "But web browsing only continues to increase."

Bixby says a revolution in mobile-optimized websites could eventually de-emphasize app stores for both app creators and users--though he acknowledges that's hard to imagine right now, during the height of the mobile app market.

"Apps as we know them now are a phase in the maturity of the mobile Internet," he says. "The browser is what will define that experience in the future."

Taptu's Lazar thinks otherwise: that apps will continue to be important, and that technology like HTML 5 will just make it easier for entrepreneurial businesses to negotiate all aspects of the mobile web, whether in site development or app development.

"HTML 5 lets Taptu create a smart browser solution without having to rewrite a lot of code, but you will still have apps. Like your website, they will just be written in HTML 5," he says.

The increasing ease with which entrepreneurial businesses can leverage the mobile web could make it a simple decision for companies to get onboard. In addition, it's a relatively inexpensive move, and it might even make sense for some new businesses to make their Internet debut as a mobile website.

Still, dotMobi's Brand says the decision to mobile-optimize a site or to go further and support m-commerce is something that has to come down to a business's understanding of its audience.

Bigfishtackle.com was so certain of its users' interest in mobile that it snapped up about 30 .mobi URLs from dotMobi, Hodgdon says. He sees the potential for m-commerce activity, such as the ability to buy a fishing license from your phone and to display it on your phone screen.

"The .mobi site is an extension of what we have been doing from the very beginning," Hodgdon says.

Brand says the progress of mobile websites "reminds me of the desktop Internet growth of 15 years ago. It's driven by advances in device horsepower and connectivity. But desktop was a slower evolution, and the mobile Internet adoption rate is blindingly fast. The way this will take root is that entrepreneurs will talk to one another and say, 'I did this and it worked for me, so maybe it will work for you.'"