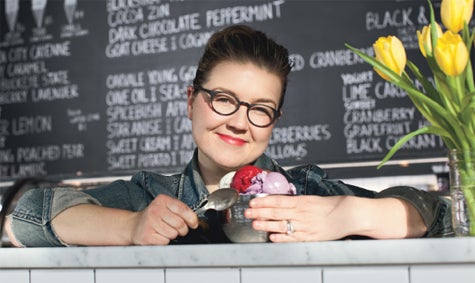 While most ice cream entrepreneurs concern themselves with perfecting basic vanilla and chocolate, Jeni Britton Bauer started her career experimenting with flavors like bacon, salmon and curry. Her first concoction was a combination of chocolate ice cream and cayenne pepper essential oil.

"I just thought it was a super-creative thing to do: make something frozen hot," Bauer says. "So when I did that, I started thinking, ‘Oh, my gosh, I've never had ice cream with rose petal or basil or all these other wonderful things.'"

Bauer teamed up with a friend to launch her "starter business," an ice cream stand in Columbus, Ohio's North Market, a public market with artisan food businesses. Although that business closed in 2000, her love of making unusual ice cream was still strong.

She and her husband, Charly Bauer, began working on a new business plan and opened up a Jeni's Splendid Ice Creams in 2002. Brother-in-law Tom Bauer joined the company as a partner a year later. 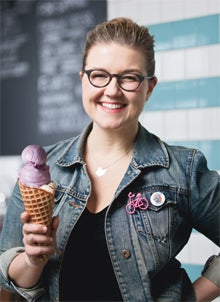 Determined to make her second run at the ice cream business a success, Bauer visited other food businesses and tried to figure out exactly why her first venture soured. She decided she needed to be meticulous about keeping customer favorites--such as salty caramel and wildberry lavender--in stock while using a second dipping freezer for more experimental flavors, which "could follow the seasons of the North Market."

Bauer also realized her pricey $10-per-pint flavors needed to have exceptional ingredients and be backed by a team of enthusiastic employees. With about 15,000 independent ice cream shops nationwide, according to the National Ice Cream Retailers Association, it's a tough market to crack.

Malcolm Stogo, founder of Riverdale, N.Y.-based ice cream consulting firm Malcolm Stogo Associates, thinks the Bauers' approach of branding themselves as the "unusual flavors" ice cream company was a smart one. He says the plan to start out very small and focus on the quality and uniqueness of the product, in addition to finding locations with high foot traffic, were key ingredients in Jeni's success.

Eight locations, plus Dean & DeLuca
But such success isn't always easy. Bauer agonizes over the texture of her ice cream and admits some of her more "out there" flavors don't work. (Roughly one in 100 makes the cut.) It takes about 16 weeks for the Jeni's team to take a flavor from concept to cooler, a nimbleness Stogo says is impossible for larger brands.

"When you think of ice cream, you have to think of milk as being water, protein, fat and lactose, which is sugar," Bauer says. "You have to think about how they all interplay together when they're frozen. If you don't understand those things, you'll have trouble making ice cream."

It's exactly that attention to detail that earns Jeni's its loyal clientele and has allowed the company to grow significantly despite the recession. The eighth Jeni's location is slated to open this April.

In 2006, a Jeni's customer took a job with Dean & DeLuca, a chain of upscale grocery stores based in New York City, and convinced co-founder Giorgio DeLuca to carry Jeni's ice cream. Since that first wholesale account, the Bauers have landed over 150 more nationwide.

The company also does a brisk online sales business of nearly 100,000 units per year--no small feat when you consider the costs of shipping ($10 to $35 per package). That's on top of the product itself, which runs $48 for four pints to $92 for nine. Bauer says her staff has grown to about 120 people, including 30 full-time office and production kitchen staff.

Even in the midst of the growth, Bauer still retreats to a small test kitchen to develop new flavors and nurture her creative side. While she claims she has never been an athlete, she likens the process to being part of a sports team.

"You come up with a game plan … your strategy," Bauer says, "and you do your best to execute it and hope that's enough."