Facebook is proving itself a small-business marketing force. Here are three examples of how it's working.
Next Article

No movie theater in America understands the importance and business value of social interaction better than the Alamo Drafthouse Cinema. The 11-theater chain headquartered in Austin, Texas, has featured marquee attractions that have transformed moviegoing into a communal experience: a quote-along screening of Pulp Fiction, the Tough Guy Cinema series (which revives action hits like the Arnold Schwarzenegger vehicle Predator, complete with complimentary cap gun giveaway) and the HeckleVision showcase (offering quick-witted patrons their chance to eviscerate misfires like M. Night Shyamalan's The Happening), for example. Events like these have earned Alamo Drafthouse the adoration of film geeks as high profile as director Quentin Tarantino, who holds his semi-annual QT Fest movie and multimedia event at the downtown Austin location.

"We've developed a unique fan base, and our patrons are very respectful and knowledgeable about movies," says Alamo Drafthouse founder and CEO Tim League. "All of our special events are hosted by members of our programming staff, and we hang out with the audience after the movie ends. That kind of conversation and dialogue is very important to what we do."

So is Facebook--now. Alamo Drafthouse has relied on digital marketing since its inception: League assembled an e-mail list soon after launching the company in 1997, and also built its first website. He later made his first foray in social media via Myspace but had a less-than-spectacular experience.

"I felt obligated to use it because so many other people were using it, and I felt we had to get involved," he says. "But I hated it. It never clicked. When a friend pointed me to Facebook, I stayed up most of the night checking it out. It clicked immediately."

Facebook works well because it expands the scope and reach of Alamo Drafthouse's ongoing dialogue with its patrons, League says. 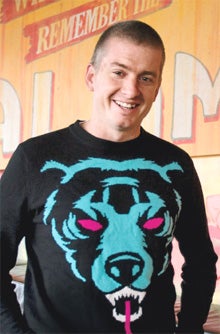 "Facebook isn't a one-way means of communication. You have to look at it in terms of conversation. You have to monitor comments, respond and engage with your customers. It's a way of telegraphing that you're listening, and that you do care."

Last fall Alamo Drafthouse signed on as one of the inaugural partners supporting Facebook Deals, which offers bargains and coupons to consumers who check in at physical locations like retail stores and restaurants via their smartphones. Facebook Deals partners can offer coupons, loyalty programs, premiums and other promotions: Alamo Drafthouse awarded a limited-edition pint glass to anyone checking in across the chain. League produced 10,000 pint glasses in all, and patrons claimed the entire run in about two weeks.

"We've dabbled with [location-based mobile social networks] Gowalla and Foursquare, but those services are about rewarding über-customers," League says. "The Facebook Deals concept enables us to reward anyone who comes into the theater. It's more inclusive, and it incentivizes people to give us a shot for the first time."

Facebook Deals is a natural extension of existing consumer behaviors, League says. "Our customers are already checking in when they go places. It's an easy way to post an update about something you're doing."

As anyone who follows the movie industry knows, when something is a success, a sequel is inevitable. League says Alamo Drafthouse is already plotting the details of its next Facebook Deals promotion.

"A good deal has to be meaningful, and something people want--you also have to have an established Facebook presence to get the word out," League says. "It may not be right for everybody, but it's a cool tool. And if it's executed properly, then it's a great tool."

AnnaB's Gluten Free Bakery
Anna Strahs didn't follow the usual recipe for small-business success. About three years ago, Strahs was diagnosed with Celiac disease, an intestinal disorder triggered by the body's reaction to gliadin, a gluten protein found solely in wheat. Effective Celiac treatment demands that sufferers adhere to a gluten-free diet, but Strahs, who was working for a Richmond, Va.-based IT recruiting firm, found few local merchants and restaurants catering to her specific needs.

"Here in Richmond there's a concentration of hip local businesses, but there's a real absence of healthy alternatives," she says. "At first I started baking to feed myself, but soon I realized other people needed this, too. So I left my job and started a baking business in my apartment."

That business, annaB's Gluten Free Bakery, quickly outgrew the confines of Strahs' home and now encompasses production facilities in Richmond and nearby Williamsburg. Its menu crosses over into corn-free, nut-free and dairy-free alternatives as well.

Strahs launched the annaB's Facebook page when she started the company, posting photos and notes to keep customers updated on her progress. Now she tweaks the product line and introduces new recipes in response to Facebook user comments and requests.

"Facebook is a great way to receive direct feedback on what people like," Strahs says. "That helps guide us to what we do next."

In late 2010, Strahs invested $25 to roll out her first Facebook Ads campaign, targeting local users whose profiles indicated their interest in gluten-free lifestyles, veganism, running and other health-conscious subjects.

"Facebook Ads allows you to limit exactly how much you spend," she says. "Each click averaged 43 cents, and we got 50 clicks almost immediately. We also started getting calls and orders."

Facebook, Strahs says, offers its merchant partners sample ads, suggests effective call-to-action tools and supplies metrics and customer support to simplify the promotional process. "They make it easy," she says. "You're only paying for what people click on."

While some consumer advocates have criticized Facebook's approach to privacy and its push to make user information more public, Strahs says that advertisers have no direct access to customer data. Targeted marketing is instead based exclusively on information and interests identified on the user's public profile, with all targeting done anonymously within the ad serving system. Advertisers interact directly with users only in the event that a consumer decides to respond to their pitch.

"Facebook enables me to narrow down the search for potential customers that have given me permission to target them," Strahs says. "My ad is one of many advertisements on the side of your Facebook profile. If you don't like it, click the 'x' and you won't get ads from me anymore."

AnnaB's Gluten Free Bakery now boasts a baker's dozen merchant accounts (including Whole Foods Market) and ships its products across the U.S. Strahs says Facebook has been instrumental to the company's growth.

"I've done all of this while spending less than $300 total on advertising, mostly on Facebook," she says. "Out of all the tools I've used, Facebook is the most effective at getting the word out. I want to help people. The whole point of the bakery is to help people eat normal foods and live normal lives."

CM Photographics
Photographer Chris Meyer credits Facebook for helping bring his business into focus: The Facebook Ads campaigns for his CM Photographics target women ages 24 to 30 within a 50-mile radius of Minneapolis whose social networking profiles identify them as engaged. Meyer is now one of the busiest photographers in the Twin Cities.

CM Photographics began advertising on Facebook about five years ago. So far, Meyer has spent about $2,220 to market his services across the platform, resulting in revenues topping $125,000.

"In the past I'd advertised on Google AdWords and [local magazine] Minnesota Bride, and didn't get a single response," Meyer says. "The value of advertising on Facebook is that you can narrow down the demographic you want to reach. It's super simple and straightforward."

The demographic that CM Photographics covets is what Meyer calls "Facebook brides." They are upper-middle-class consumers looking to spend between $25,000 and $50,000 for their wedding.

"It took us a while to find out what kind of niche a Facebook bride is," Meyer says. "Once you know your demographic, the challenge is figuring out the message you want to communicate. People are always looking for a good deal."

So are small businesses, for that matter. With Google AdWords, Meyer says, it could cost about $8 per click to be listed on the top of the page. "The problem is that my competition can click on my ads, and it's going to cost me," he says. "But with Facebook, I can limit my ads exclusively to customers I want to target for about 70 to 90 cents per click. Unless somebody comes out with something that's simpler, less expensive or more efficient, I don't see how anybody can compete."

The New Local
Emily White, Facebook's senior director of local, weighs in on why Facebook Pages--public profiles where brands share information on their products and services with the digital community--are finding a niche with small local businesses

On Facebook Pages: The web is being rebuilt around people. People used to discover local businesses through word-of-mouth, but the context of Facebook allows for social discovery. When you go to your friends' profiles and see what they like, that kind of recommendation is so much more valuable. Facebook Pages creates a community around your brand and lets you communicate directly with fans. It's a relationship-management tool.

On targeted advertising: Facebook Ads allow businesses to find people before they're even searching for you. You can target users according to their location, demographic, likes and interests--we also offer advanced demographic targeting tools, like birthdays, education and line of work. With Facebook Deals, we're taking the online conversation and moving it into your store. Users check in and it creates a newsfeed story so their friends can see where they are and what they're doing.

On privacy concerns: I've never heard a merchant voice that concern. We only target ads based on information users explicitly give us. User data is completely anonymous--we don't share their information with advertisers. Advertisers have no idea who individual people are; they're only serving ads to users interested in their products.

On Facebook's slow adoption for businesses: A lot of businesses still aren't online at all. They've been told they need to be online, but the value isn't entirely obvious to them, so they hire their nephew or a web designer to create a static website. They need to understand that Facebook Pages require so little work--users are giving businesses content and context. Social context is more important than ever in the decisions that users make. Facebook enables word-of-mouth on a broad scale. We're taking behaviors that have been around thousands of years and putting control in the hands of the merchant.