When your restaurant operates under an old-school, back-to-basics brand name like Original Joe's, chances are many patrons walk in expecting old-school, back-to-basics dining--you know, classic meat-and-potatoes fare. But Original Joe's, with 40 locations across Western Canada, couldn't be more au courant: Its globe-trotting menu spans everything from chicken gyoza (Japanese-style dumplings) to Mediterranean short ribs to poutine (French fries topped with cheese curds and brown gravy--a signature dish from Quebec, just a few provinces over). There's even a special menu for gluten-sensitive diners.

Original Joe's takes a similarly progressive approach to its digital marketing outreach efforts. Like many rival restaurant franchises, the chain is increasingly active on Facebook, but the company struggled to translate customers' in-store enthusiasm to online interest. "We realized social media is here to stay, but we couldn't figure out the best way to capture an audience," says Jeff Humphreys, the Original Joe's Franchise Group's manager of digital and social media.

Original Joe's spiced up its Facebook presence with the help of Palo Alto, Calif.-based Wildfire Interactive, which provides companies of all sizes with web-based tools that creatively engage users across the social networking landscape. Wildfire's solution helps small businesses develop branded, interactive campaigns, including sweepstakes, coupons and user-generated content competitions. The campaigns run on Facebook, Twitter and company websites, complete with widgets that make it easy for consumers to share the promotion with friends.

More than 34,000 people viewed the free wings offer on Facebook

When Original Joe's first signed on with Wildfire, only about 1,300 customers had "liked" the restaurant on Facebook. Original Joe's responded by rolling out a coupon promotion offering users who endorsed its Facebook page a free one-pound order of chicken wings, redeemable at any location.

Co-founders Victoria Ransom and Alain Chuard began developing the Wildfire platform while running their previous venture, adventure travel startup Access Travel. "The best way for brands to engage with consumers is to offer them deals and contests, so we decided to give away a free trip," Ransom says. "But it's very complicated to run a sweepstakes on a Facebook fan page, so we had to create an app to do that. Most small and medium businesses face the same problem, so even though we built Wildfire for our use, we decided to put it out there for others. We realized it could be a big opportunity." 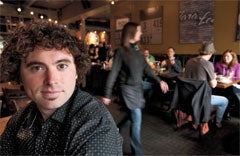 That's an understatement. Since launching in mid-2009, Wildfire Interactive has worked with tens of thousands of brands ranging from mom-and-pop outfits to corporate behemoths like Amazon, Target and Electronic Arts. The majority of Wildfire customers go the DIY-with-help route. Wildfire's self-service toolset includes a six-step wizard that automatically builds campaigns customized according to a company's demands. With the click of a button, the finished promotion is beamed out to millions of potential customers across the social media sphere.

Expect Wildfire to keep spreading: According to Ransom, the firm plans to introduce a broader set of tools addressing all facets of the social media experience. "Campaigns are great for building up a fan base and keeping them engaged, but there's more to growing an audience," she says. "We want to provide tools that deliver tangible, measurable results. We also want to offer tools that are easy to use. Our partners don't need tech knowledge to use our platform."

Meanwhile, Original Joe's is already plotting its next social media promotion. "Using Facebook properly and engaging customers is a big perk," Humphreys says. "Our Facebook page is becoming an interactive page--it's virtually run by our fans. Every day we get questions about new locations or menu items. It's so important to have an avenue to connect with customers outside of the restaurant."