How to Build a Stellar Team at a High-Potential Startup

Imagine trying to convince a Yankees star pitcher to join a new, unproven Major League Baseball franchise. An impossible task? Not necessarily. Corey Reese, co-founder and CEO of Ness Computing, took on the tech-world equivalent of the challenge--and succeeded.

Reese wanted Apple engineer Scott Goodson, a member of the team that developed the iOS platform for the iPhone and the iPad, to decamp from Apple and join Ness as director of engineering. It was 11 months before Reese got a yes out of Goodson. What did it take?

"It was a mutual respect and recognition of each other's situations," Reese says. Over many (many) conversations with Goodson, Reese made it clear that the engineer could really shine at Ness, and that he could help solve a problem that had never been tackled by a startup. "It was more like, ‘Whenever you're ready to move, let's talk,'" Reese says, "and it was definitely worth the time to develop that relationship, because it really does start with hiring great people."

The Los Altos, Calif.-based startup, founded in October 2009, came out of stealth mode late this summer with the release of Ness, an iPhone app that makes personalized, on-the-go recommendations for restaurants (and soon, shopping, travel and night life) based on people's preferences and their friends' activity on social networks. They've raised money from Khosla Ventures, Alsop Louie Partners and the founders of Palantir Technologies, and they count the creators of FarmVille and Mint.com among their advisors. Reese, however, still spends between 30 and 50 percent of his time recruiting talent for his team, which numbers around 15.

"If a CEO looks at his function as [finding the employees] to achieve business goals, spending a significant amount of time hiring the very best people for key positions is a great way to run a business," says Reese, who spends as much time searching for--and getting to know--potential interns and recent grads as he does looking for industry leaders. "Great things come out of a culture that combines experience with youth and enthusiasm," he says, citing Bill Gates, who hired a similar mix of "kids" and "veterans" in the early days of Microsoft, as an example.

As a former associate at a venture capital firm, Reese leveraged his existing networks at the University of California, Berkeley, and Stanford University--and now also MIT and the University of Texas at Austin--to pinpoint the brightest talent in the freshman and sophomore classes, before Silicon Valley's big guns start competing for their attention. "Find where your target employees are, and evangelize," Reese says. He also established Ness's on-campus reputation by sponsoring engineering "hackathon" competitions and by focusing recruitment efforts at a small number of prestigious computer science programs, looking for students interested in "building stuff," rather than just maintaining sky-high GPAs.

Hackathons make it easy to spot the best candidates for internships: "They're the ones everyone goes to when they run into programming problems," Reese says. His strategies have paid off. He met two of his three co-founders at a 2009 hackathon--one was the winner, the other an employee of another sponsor--and one of his intern hires built the first version of the Ness app. After the app's basic framework was developed, former Apple staffer Goodson stepped in to turn Ness into a market-ready app and, along the way, mentor the young employees. 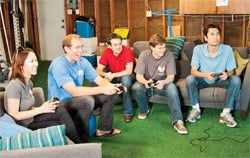 Reese takes a long-term view of the hiring process. "Even if you're not looking to fill a specific position, you want to get to know people and build a reputation for when you do need to hire," he says, and that includes socializing at events that aren't directly related to recruiting. Ness holds barbecues regularly, inviting potential hires to meet the staff and advisors in an informal setting. People who already have jobs might not respond to an interview request--"but when you say, ‘Come hang out, bring your friends, have some food,' it's a good way to get people comfortable and talking--and interested in working for you," Reese says.

Jared Hecht, co-founder of New York City-based GroupMe, says a company's core idea is one of its most valuable assets for recruiting--and retaining--talent. It doesn't matter how many great people you hire if you can't keep their attention, he says. Launched in July 2010, Hecht's mobile group-texting and conference-calling service has raised more than $11 million from investors, has partnerships with Bon Jovi and MTV and sends more than 100 million messages a month.

"The biggest key to engaging employees is a great idea," Hecht says. "It's also an excellent litmus test, to see if your idea is good enough to keep brilliant people interested."

GroupMe, which has 20 employees, offers potential hires an "engineering-centric culture" that allows them to have creative input, and, more important, to work with smart people who push each other to do better. The idea and the company culture both contributed to two of Hecht's hires, each of whom passed on offers to work for Square, a prestigious startup in the mobile payments space, after consulting with GroupMe for a few weeks: "They fell in love with the service and ended up joining the team full time," Hecht says.

The Matchmakers
While companies have long turned to sites like Monster and CareerBuilder to fill open jobs, they're not always the best options for startups--especially those in specialized fields or that require specific skill sets.

"After money, the hardest thing to find is the talent," says Chris McCann, co-founder of NextDigest, which publishes the StartupDigest newsletters. But, when it comes to recruiting top talent, the employees you want rarely bother with job boards. Most are bombarded by recruiters every day.

That's led to a boomlet of niche services for the tech industry, including networking sites like VentureLoop, StartUpers and Startuply, as well as services like Interviewstreet, which tests candidates' programming skills.

McCann recently joined the fray with his StartupDigest VIP, which aims to help startups find engineers and designers. The service focuses on bringing together a small pool of startups with prescreened job candidates who specifically want to join a startup. In just the first month, two of 11 users received job offers, and two more were flown out for final interviews. The service is growing fast, and McCann says he'll probably partner with VC firms as he expands.

Non-tech businesses have shiny new options, too. Bangalore, India-based Recruiterbox is streamlining the hiring management system for startups and companies with fewer than 30 employees. "There's a big demand for this," says Raj Sheth, who co-founded the company late last year. "Hiring at startups is often unstructured, and recruitment software is only available to big enterprises." For a monthly fee of up to $200, depending on the number of job postings, customers get a one-stop spot to post, advertise and manage job listings and applications.

The company's stable of paying clients includes Groupon China and Levi's India, and in the U.S., consulting firm 2ndWave. Sheth has also signed on tech startups like Blue Mountain Labs and Cloudscaling, but at least 70 percent of his clients are non-tech companies.

Sheth advises founders to pay special attention when posting job ads, because often it's the first impression candidates get of a company. He recommends posting in relevant places, like a niche startup board or through an incubator like TechStars or Y Combinator, which will yield more responses from candidates who understand what to expect when signing on with a startup--more equity than salary, a big job footprint and a ton of risk.

Next, spend as much time writing the job description as a motivated candidate would responding to it. "You're not hiring for a normal job," Sheth says. Be articulate and communicate the expectations, but also make sure to introduce the company properly, so you can filter for candidates who are aligned with your culture.

As historian and explorer Sir Walter Raleigh once noted, "The employer generally gets the employees he deserves." All the more reason to do it right at a startup, where every hire makes an exponential difference.

[The Academic]
What happens to a great idea without a good team behind it? "It goes nowhere," declares Teresa Amabile, Harvard Business School professor and author of The Progress Principle: Using Small Wins to Ignite Joy, Engagement, and Creativity at Work. While researching her book, Amabile asked 12,000 people to keep diaries of their thoughts at work, including their feelings about their co-workers and bosses. She found four essential elements for "high-potential" startups looking to assemble a stellar team.

[The Entrepreneur]
"When you're in a big company, volume covers a lot of sins," notes Michael Feuer, serial entrepreneur, co-founder of OfficeMax--which he sold for $1.5 billion in 2003--and author of The Benevolent Dictator: Empower Your Employees, Build Your Business and Outwit the Competition. "In a startup, you can get to bare metal after one mistake, and not everyone is suited for that environment." But that doesn't mean you should hire only Type A players--you need leaders and followers, he says, as long as they are: