Baseball players know that when times are tough, when you're really slumping with your mechanics at the plate, you just need to "grind it out."

Matt Canepa and Pat Pezet did just that through years and years of unsuccessful amateur and minor league baseball careers. In 2008, after wrapping up their amateur season to return to California Polytechnic State University, San Luis Obispo, to finish their degrees, the two men took the saying a step further.

One too-hot night while working on an economics project, they decided to skip out on brewing a pot of coffee in favor of doing what comes naturally to baseball players: They stuffed wads of grinds in their mouths.

"The buzz kicked in and we said, ‘Shoot, we might be on to something,'" Canepa says.

That something was Grinds, tiny chewable pouches of flavored coffee grinds. Each pouch contains about as much caffeine as a quarter cup of coffee, as well as a smattering of taurine and B vitamins.

Soon after their discovery, the duo dashed off a business plan that snagged $3,000 in a competition at their school's business department. Later that year, they won $15,000 in a similar schoolwide contest, and a handful of judges signed on as investors. In June 2009, less than a year after the idea was born, Canepa and Pezet officially launched their company, also named Grinds. 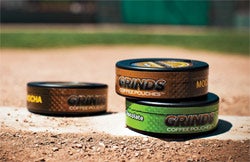 Rather than sell the first "cans" of Grinds to the general public, Canepa and Pezet decided on a slow rollout of free product to a targeted audience: major and minor league ballplayers. "You've got about 5,500 people in professional baseball," Canepa says. "We figured that would be a great focus group."

Word-of-mouth fueled steady momentum as the Grinds guys tweaked their product according to customer feedback. By mid-2010, cans of mocha-flavored (and in 2011, mint-flavored) Grinds were in a handful of pro baseball clubhouses across the country--and the product's fan base was growing.

Bruce Bochy, manager of the San Francisco Giants, says Grinds has helped him ditch chewing tobacco once and for all. Other Grinders include Nick Swisher of the New York Yankees, Charlie Furbush of the Detroit Tigers, Ike Davis of the New York Mets and John Lannan of the Washington Nationals.

Canepa says company revenue is in the "high five figures," adding that they expect to break the six-figure mark by the end of the 2011 baseball season.

Next up: a stop at the U.S. Food and Drug Administration (FDA). Because the product is considered a supplement, it's not subject to formal approval. Instead, Canepa and Pezet aim to get Grinds FDA-designated through the Generally Regarded as Safe program.

Will Grinds ever go retail? Canepa says that's the eventual plan. If the product's early pack of chewers is any indication, it looks like Grinds will be a hit out of the park, too.