How One Small Company Is Using QR Codes 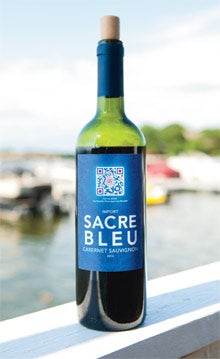 You can't judge a book by its cover, and you shouldn't judge a wine by its label, either. But research illustrates that most consumers do it anyway, making wine purchases that are influenced as much by the brand name, typeface, illustration and overall label design as factors like price and expert ratings.

That's just one of the lessons Galen Struwe learned when he ankled his career as a consumer electronics sales rep to form Prior Lake, Minn.-based Sacre Bleu Wine in 2008.

"I spent months studying the wine industry and discovered that its growth hinges on the millennial demographic," Struwe says. "But they're very cynical about the buying and review process. We don't have the budget to run ads in Wine Spectator or Food & Wine, but millennials told us 'That doesn't matter. We don't read those things anyway. We get most of our information online.'"

Now the startup is partnering with Paperlinks, a Los Angeles-based provider of QR codes (QR stands for "quick response"), to add barcodes to the stylish and sophisticated Sacre Bleu label, moving beyond graphic design to deliver vital consumer information when and where it matters most: at the point of sale.

Shoppers who scan the Sacre Bleu matrix code with their smartphone (using the free Paperlinks application for iPhone or any other QR code-reader solution) are transported to a custom mobile landing site complete with brand information, promotions, special offers and even food and wine-pairing tips from chef Brad Sorenson, a finalist on season six of The Next Food Network Star reality series. "We're going to take the consumer down a richer road of discovery," Struwe says.

Forty-nine percent of U.S. consumers who have seen QR codes on products or in advertisements have scanned them, according to a study conducted earlier this year by integrated marketing and communications agency MGH.

"People want to get information directly using their smartphones, and they want it to be context-aware," says Paperlinks founder and CEO Hamilton Chan. "QR codes are cheap to deploy and easy to scan. It's a way for brands to enhance customer engagement that also gives consumers the chance to get something in return."

About 10,000 clients have rolled out QR code initiatives since Paperlinks introduced its B2B platform this past spring, with most customers opting for the $24.95 per month subscription plan. The company's drag-and-drop interface lets businesses build their own campaign in minutes, customizing their mobile landing pages with a host of interactive content modules. Paperlinks analytics data identifies which campaign components are succeeding and which aren't. Brands can update the modules as necessary, with all tweaks reflected in real time.

"Consumers have different expectations on mobile--they want easy access and a quick payoff," Chan says. "They also want unique content. It's self-defeating if the customer takes out their phone, scans the QR code and gets nothing more than the desktop URL they could have typed on their own."

Because QR codes are integrated directly into the product packaging, the concept guarantees a more seamless entry into the consumer consciousness than promotional banners, cardboard displays and other retail advertising staples, Struwe says. "It's a way get the word out without crowding the retailer and offending the other brands on the shelf," he says. At the same time, incorporating a QR code into a brand's label (complete with scanning instructions) poses its own aesthetic challenges, so Paperlinks supplies multicolored designer codes that fit comfortably within the product's overall image.

"Paperlinks helped us integrate the code without stepping all over our branding," Struwe says. "They adapted its colors to be compatible with our label. It's a transition, but it's not radical. It stays within the boundaries of our brand."

"We want to extend the brand experience in ways that conventional media and marketing can't do," Struwe says. "We also want to foster a connection that transcends the point-of-sale transaction. Most of all, we want you to say, 'This brand is cool.' That's the success story."

How Much Time Should You Be Spending on the Google Algorithm Update?

Podcast Advertising: Is Programmatic the Next Big Thing?

The 17 Best Content Marketing Books You Can Read Right Now