Get Out of Town With Wanderfly

Travel agents, your days are numbered. Globetrotters are increasingly forgoing brick-and-mortar agencies in favor of the internet to seek out destination spots: This year, the proportion of travelers who planned trips online grew to 82 percent, and 58 percent of trips were booked online, according to a September report by research firm IBISWorld.

Even getting suggestions for where to go is being outsourced to the online crowd: "Before, people would go to the travel agent and … get that personalized recommendation," says IBISWorld senior industry analyst Nima Samadi. "With people increasingly booking online, they don't really have that option, so that's where recommendation services fill the void. You can use other people's aggregated opinions to figure out what the inside track is." 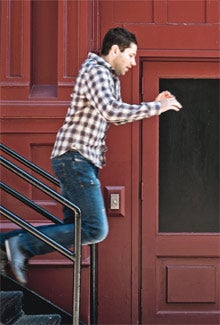 Up in the air: Evan Schneyer of Wanderfly.
Photo© David Johnson

One such service nudging its way into the shifting industry is New York-based travel inspiration and recommendation site Wanderfly. Launched in October 2010, Wanderfly aims to streamline the "Where should I go?" process by offering users a visual recommendation experience based on input factors like interests, budget, trip length and other travel details.

"If you think about the other options like Orbitz and Expedia and Kayak, and even some of the more planning-oriented ones like TripAdvisor or Lonely Planet, you have to know a lot about what you're looking for," says Wanderfly co-founder and CEO Evan Schneyer. "We wanted to flip that on its head and have an open-ended search so you can say, 'I want this kind of experience, here's my budget, start giving me ideas.'"

And it's working: More than 4 million trip recommendations covering more than 1,400 cities have been provided to users in 217 different countries. The team has expanded from four co-founders to a staff of 12, and the company now has more than 30 partnerships with brands like Mint.com, History channel and Havaianas. Early this year, Wanderfly raised $1 million in funding from Charles River Ventures, Jason Calacanis, StartupAngel, James Bailey, Roger Dickey and other angel investors. And recently the company's technology was integrated across about 1,000 travel-related pages of The New York Times online.

To stay fresh in the space, Wanderfly has focused on providing quality with its quantity. "What we've grown on to date is about the user experience and giving people a fresh way to discover things in a category that is otherwise very cluttered with too much information too soon," Schneyer says. "We knew it was going to be crucial to combine this fun, engaging user experience with something that actually really works under the hood."

The startup will delve deeper into the user experience in 2012 with a site relaunch that will include more social functionality and user-generated content, like suggestions of things to do within cities and user-to-user recommendations. The goal is to multiply the content by 50 to 100 times what Wanderfly has now, says co-founder and director of marketing Christy Liu.