Brewing Up a New Business Idea from a Coffee Castoff 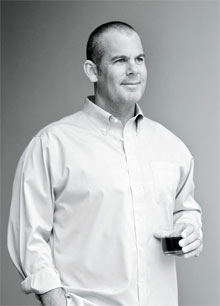 Shaun Roberts, co-founder and CEO of Kalaheo, Hawaii-based KonaRed, is giving the sports drink category a java jolt. His company turns a byproduct of coffee production into a line of energy drinks, also called KonaRed.

Before coffee farmers can ship out the beloved bean at the center of the coffee fruit, they have to strip away its skin. An estimated 40 million pounds of the stuff gets tossed annually in Hawaii alone. And the high cost of labor makes it hard for farmers to justify even composting the waste, says Tom Greenwell, president and general manager of Greenwell Kona Coffee Farms in Kealakekua, Hawaii.

That someone is looking to buy discarded coffee skins from farms is a "wonderful idea," Greenwell says. "As an operation, we're now getting paid for the skin, and it used to be just a cost. This is one of those byproduct deals that is a big benefit to farms."

The tart KonaRed drink is naturally caffeinated, although less so than coffee, and it's packed with antioxidants and other ingredients that Roberts says have functional health benefits. In fact, says Roberts, a serial entrepreneur with a history of developing green products and businesses, KonaRed's earth-friendly beverages represent "the next category of superfruits."

Roberts' 15-employee firm introduced KonaRed in January 2010, after a year of lab testing. The original product, which tastes like pomegranate and prune juice on steroids, competes with Pom Wonderful, Zico coconut water and other natural energy drinks. The original flavor retails for $3.99 for a 16-oz. bottle, and now has been joined by an expanded product line of KonaRed coconut water and stick packets (for on-the-go mixing with bottled water). Distribution has expanded to the mainland, including Costco in California and grocery chains in the Pacific Northwest.

Roberts will not release KonaRed's revenue numbers, but he says the company reached seven figures in 2011 and has rapid expansion plans for 2012. He finances the operation personally and with investments from family and friends, but he says the biggest challenge has been keeping up with demand.

"This product was born out of the waterman community, for people who like to surf, paddle, hike and canoe," he says, noting that he'll continue to promote through spokespeople like world-class stand-up paddleboard racer Candice Appleby and through junior lifeguard events, long-distance paddleboard events and in-store demos. "We do not believe in traditional advertising," Roberts says. "This is a lifestyle company."