By Jonathan Blum January 19, 2012
This story appears in the January 2012 issue of Entrepreneur. Subscribe » 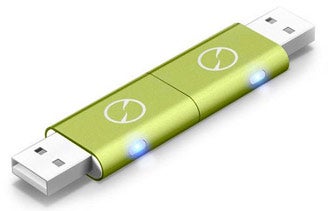 Web-based data storage services such as Dropbox, Box.net and other cloud options are starting to replace the trusty--but easily misplaced--portable, solid-state flash drive. But limits on the amount of data that can be stored online, the cost of such storage and nagging security issues limit how small firms tend to use these backup services.

The iTwin is clever, but not completely intuitive: Users plug the $99, two-part device--which looks like a normal USB flash that can be snapped in half--into a computer. The software launches from the iTwin automatically, and users designate which files or folders should be shared. Next, users detach one half of the iTwin, leaving the other half plugged into the main computer. Then they just plug the detached half into the USB port of any other web-connected Mac or PC, and voilà: the remote PC has direct access to shared files back at the office.

The effect, we found, was a bit like having a very large, web-connected flash drive but with an incredible benefit: If the iTwin gets misplaced, there won't be any data lost.

Brian Chamberlain, iTwin's vice president of marketing, says the service is particularly useful for employees who need a secure way to share large, confidential files (such as accounting data) with remote clients.

Related: How Many Bytes Do You Need for Your Data-Storage Buck?

One knock against iTwin: For now, it allows sharing between only two computers. But Chamberlain says the company is working on enhancements, set to roll out later this year, that will allow the device to access multiple computers running on the same office network.

Either way, for on-the-go entrepreneurs looking for a way to bypass the headaches of web storage or potential data loss, the iTwin is worth a look.