By Ross McCammon January 27, 2012
This story appears in the February 2012 issue of Entrepreneur. Subscribe »

Here's what the psychologists think about praise: "Positive reinforcement works better than punishment."

Here's what the neurologists think: "Dopamine, which is released in the brain any time we hear something we like, is a powerful chemical."

Here's what the psychologists, management experts and neurologists think when someone in a position of power tells them they're doing a great job: "Hell, yeah!" (That, of course, is the dopamine talking.)

A 2010 study published in Harvard Business Review found that at Best Buy, a 0.1 percent increase in employee engagement drove $100,000 in operating income to the bottom line of each store per year. Now, employee engagement involves lots of things, of course: personal fulfillment, career advancement, free coffee. But according to Chester Elton--speaker, motivation expert and co-author of bestselling management book The Carrot Principle--at Best Buy and many other businesses the Harvard study looked at, simple recognition was the single most important factor.

For psychologists, the wisdom of that investment is obvious. "Praising people for what they do right seems to be more effective, regardless of whether you think it's nice or not," says Dr. Laura Carstensen, a professor of psychology at Stanford University whose work focuses on motivation. "People buy lottery tickets, and mathematicians often say, How can you waste that money? Psychologists have a slightly different view, and that is, if buying a ticket for a fairly small amount of money allows you to dream and to think you might get to savor the anticipation of what that reward might look like, that's probably worth the money."

Praise is like that. It involves very little effort and produces a lot in return. It's a no-brainer, even for people who are otherwise ingrates.

So that's why you should give praise. But how? 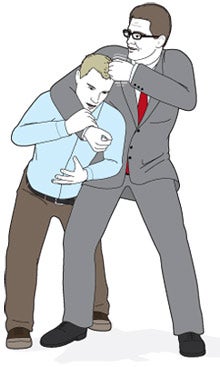 How to Give It
Most management experts stress the importance of specificity. "You want to balance praise with constructive feedback," says psychologist Dr. Wayne Nemeroff, CEO and co-founder of PsyMax Solutions, a Cleveland-based provider of "integrated human capital management tools." Nemeroff suggests, "Recall a particular situation and describe a specific behavior; acknowledge the impact the behavior or action had on the group or the project or the action or on you."

Here's what Elton suggests in his book: Do it now. The closer the recognition is to the behavior, the more likely it will be repeated. Do it often. The more you message what's important to you, the more people will focus on that. And finally, be specific.

Specificity is important, of course, but it seems to us that everything flows from sincerity. Sincerity will automatically lead to praise--and, most likely, impromptu praise. Which is the best praise of all, because it's automatically perceived as sincere. It simply takes advantage of a moment that is already happening: an e-mail that you're sending anyway, the beginning of a meeting that's happening anyway, a team-building exercise. ("Bob, never has anyone so elegantly held an orange with his chin.")

It's hard to come up with praise on the fly. And the one being praised knows that. If you take advantage of a chance encounter--if the opportunity to praise someone was never even supposed to happen--then what you're saying is perceived as authentic. The moment is simply an outlet for gratitude. (Important note: Never use the phrase "outlet for gratitude" when praising someone, or at any other time.)

How to Receive It
Giving praise is the easy part. You just have to be aware of other people's feelings and be in tune with what's going on in your business. Receiving praise is trickier--ulterior motives and all that.

And respond like this: "Thank you," or something just as straightforward. Anything else can spoil the moment. Praise should be as discreetly received as it is concisely stated.

The principle of positive reinforcement states that behaviors that are rewarded are behaviors that will be repeated. But this can be bad. If we keep repeating behaviors, we lose sight of the most important part of what we do, which is innovate. Praise should establish a new bar. We should accept the praise and then try to forget about it. We should repeat the work that was praised, but immediately move on to doing a better version of it.

What praise ultimately does is hold up a mirror. It acknowledges what people already think about themselves: that they're good at what they do. You're making someone happy and fulfilled and more excited to work with you. And for almost no effort at all.

1. Praise should not begin with the phrase "You da …."

2. Ending an expression of praise with "… and stuff" nullifies the praise.

3. Ending an expression of praise with "… now get back to work" also nullifies the praise.

8. Easy on the superlatives: "hardest-working," "most glorious," "awesomest," "best-smelling," etc.

9. Praise followed by criticism is not praise.

10. Praise followed by praise is probably a little too much praise.

Template for a concise, handwritten note of praise 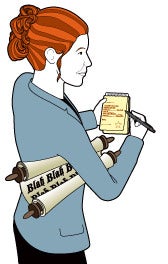 Ross McCammon is an articles editor at GQ magazine.