How One Small Business Redesigned its Website for Better Sales 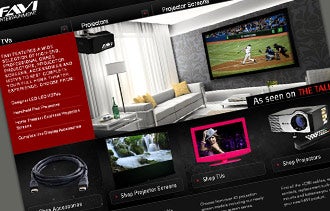 Sales through Jeremy Yakel's website, FaviEntertainment.com, were anything but electrifying. The site, which sells consumer electronics manufactured by Yakel's company, Favi Entertainment, added a pittance of about $6,000 to his 2010 revenue of $2.6 million. Yakel knew the culprit: His site was disorganized and cluttered. "We had grown into a premier manufacturer of consumer electronics, and our site just didn't say that to our customers," he says.

The Fix
Yakel decided a top-to-bottom redesign and a shift in web strategy was in order. The goals: Make the site cleaner and improve its visibility and customer experience. He put Google Analytics to work tracking customer patterns to better understand how the site was being used. And Favi's 12-person team began sending automated e-mails to customers who had abandoned carts, offering coupon codes for free shipping or other incentives to return.

Yakel integrated Vimeo videos of products into the site and used some basic search engine optimization tactics, such as updating metatag titles to frequently searched terms based on Google's Keyword Tool. He also added a currency converter to make the site easier for overseas clients to use.

Still ahead: A switch to osCommerce, a free e-commerce platform that offers shipping quotes, multilingual support, invoicing and more.

The Results
The redesign cost about $3,900, an investment that has paid off handsomely. While the site pulled in just over $5,700 in 2010, it topped $183,000 in sales during the first three quarters of 2011. And thanks to a simple app that transfers information collected via the website immediately into the company's Salesforce.com account, representatives can react to customers' needs quickly. The number of shopping carts abandoned in the virtual aisles is down 43 percent.

A SecondOpinion
Nick Chasinov, founder and CEO of Teknicks, a Bay Head, N.J., internet marketing company, gives the redesign a thumbs-up for clarity and ease of use. He says the currency calculator and the option to check out as a guest or create an account were excellent additions that appear to have added to overall sales and reduced abandoned carts.