How to Find Your Authentic Voice on Social Media

Let's also assume that, in general, you market to your customers with some measure of humanity, and that even though it's the company talking, there seems to be a human being driving the message.

It's really about voice. Which used to be something only novelists had to figure out. But now we all need a voice, because we write all the time. We e-mail. We post. When we use social media, we're writing.

And if the words--and sounds and images--that we create appear for all to see, then we have a voice--in a novel or on LinkedIn. Or Facebook. Or your company's blog. Or Tumblr. Or Twitter.*

The Unified Theory of Social Media Voice
"Don't get too caught up in the fact that this is a shiny new technology," says Martha Barnette, co-host of the public radio language show A Way with Words. "It doesn't matter what the medium is; there are still a lot of basics for effective communication that apply here and elsewhere." 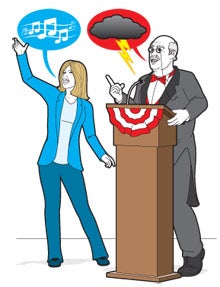 The basics are everything. Social media is often so spontaneous that basic principles are necessary. And the most basic principle of all is: Write like you talk. Which is the best piece of advice any writer can ever get.

"Write like you talk" ultimately results in authenticity. What people--even people who are well aware that they're being marketed to and that this isn't entirely a "social" situation--respond to is authenticity.

When you write like you talk, you don't do the following: respond to some jerk on Twitter with a canned response like "Thanks for the feedback!"; copy and paste a press release onto a LinkedIn discussion board; post a PowerPoint to YouTube and call that "engaging your customers via social media."

The World's Largest Cocktail Party
"A great analogy for social media is the world's largest cocktail party, only without the drinking and at incredible scale," says Dave Kerpen, CEO of Likeable Media and author of Likeable Social Media: How to Delight Your Customers, Create an Irresistible Brand, and Be Generally Amazing on Facebook (And Other Social Networks). "At a cocktail party, you wouldn't walk up to someone and say, ‘Hey, I'm Dave. My stuff is 20 percent off.' What you do is ask questions, tell stories, listen and relate to people."

A couple of things: One, walking up to someone at a party and saying, "My stuff is 20 percent off" just might work (depends on the party); two, there's a bucketload of wisdom in this.

What Kerpen is saying is that authenticity is important. Transparency is important. Accountability is important. What he's saying is that social media should be thought of as "social" in the way we used to think of social--the way we thought of social before social media existed. Pretend you're actually being social. Pretend you're speaking to your customers and that they're right in front of you. Says Kerpen: "The way to market content without sounding like you're marketing content is to not market content."

All This Content Everyone's Talking About
We have a complaint. The word content is a problem. Maybe it's a useful term, but is it the right term? Content implies mass and utility. But what it doesn't imply is "fun" or "ideas" or even "words" or "writing and sounds and pictures." Which is what you should be employing in social media. Content is what's inside a mattress or a Toaster Strudel or the brain of a frivolous man.

Content is filler. We need another word. Stuff? No, stuff is too weak a word. Sturf? Storf? The test for good content (until we come up with another word, it will have to do) is: Would I care about this if someone said this to me?

"We call it notability," says Gary Wohlfeill, creative director at Madison Heights, Mich.-based outdoor apparel retailer Moosejaw, which was founded in 1992 and has about 400 employees. "If it's not notable; if it feels too sales-y or pushy; if I wouldn't forward this to my friends--then maybe we should think about doing something else."

The bottom line is that, even in the social media universe, people don't want fast and easy. (Or "quick and shitty," as we say in the Esquire universe.) They want rich and smart. And efficient. Everything should be rich and smart and efficient. And occasionally amusing. That has always been true. War and Peace is rich and smart. It is also efficient. And there are at least a couple of lines--I'm thinking Book 4, Part 3, Chapter 5--that are amusing. Which is why it's "good."

"Thanks" is not a rich enough social media message on Twitter or elsewhere.

"Thx" isn't either. But it's easier to type. 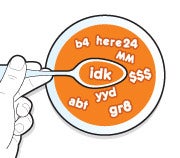 Awesome is not a language.

Never attempt to use slang on social media that you would not use in real life.

Reread your tweet. Do not respond in an official capacity via social media while drinking.

Do not respond in a nonofficial capacity via social media while drinking.

If your company's annual revenue is more than $20 million, you may not abbreviate "great" as "gr8." (For more, see our Twitter abbreviation guide)

If your company's annual revenue is less than $20 million, you may not abbreviate "great" as "gr8."

Funny only if you're funny.

No lawsuit threats via social media.

If it involves "tips" of any kind, people will click.