By Gwen Moran March 7, 2012
This story appears in the March 2012 issue of Entrepreneur. Subscribe » 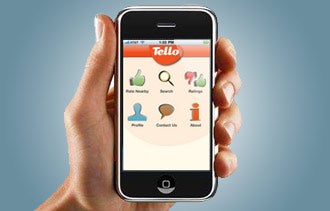 Unless there's a serious problem, most people don't pay attention to those "How am I driving?" stickers on the backs of commercial vehicles. But for Joe Beninato, a veteran of multiple Silicon Valley startups, the stickers got him thinking: Why was there not a similar reporting system for the slew of service employees--waiters, store clerks, flight attendants--consumers deal with every day? Could there be a way for him to quickly let companies know how their employees are performing?

In early 2010 the Los Altos, Calif., resident began working on Tello, a mobile platform and app that allows users to report on customer service--and only that (as opposed to such services as Yelp, TripAdvisor and Google's Place Pages, which can get cluttered with reviewer comments on everything from pricing to décor). Soon after Beninato set up shop, he attracted $1 million in seed funding from a team of 10 early-stage angel investors.

Since then, the iPhone and mobile web app has grown to "thousands of users and thousands of businesses," Beninato says, driven largely by word-of-mouth. In February, the company launched Tello for Business, which immediately notifies business owners or managers when customer service reviews are posted, so they can get a jump on damage control if necessary.

Beninato, who hopes consumers will check Tello before making a purchase, is enjoying his front-row look into the world of employee-customer interaction. Surprisingly, he says, "80 percent of the ratings are positive," adding, "We were expecting predominantly complaints, but it's been the exact opposite of that. People are trying to thank someone for doing a good job for them."